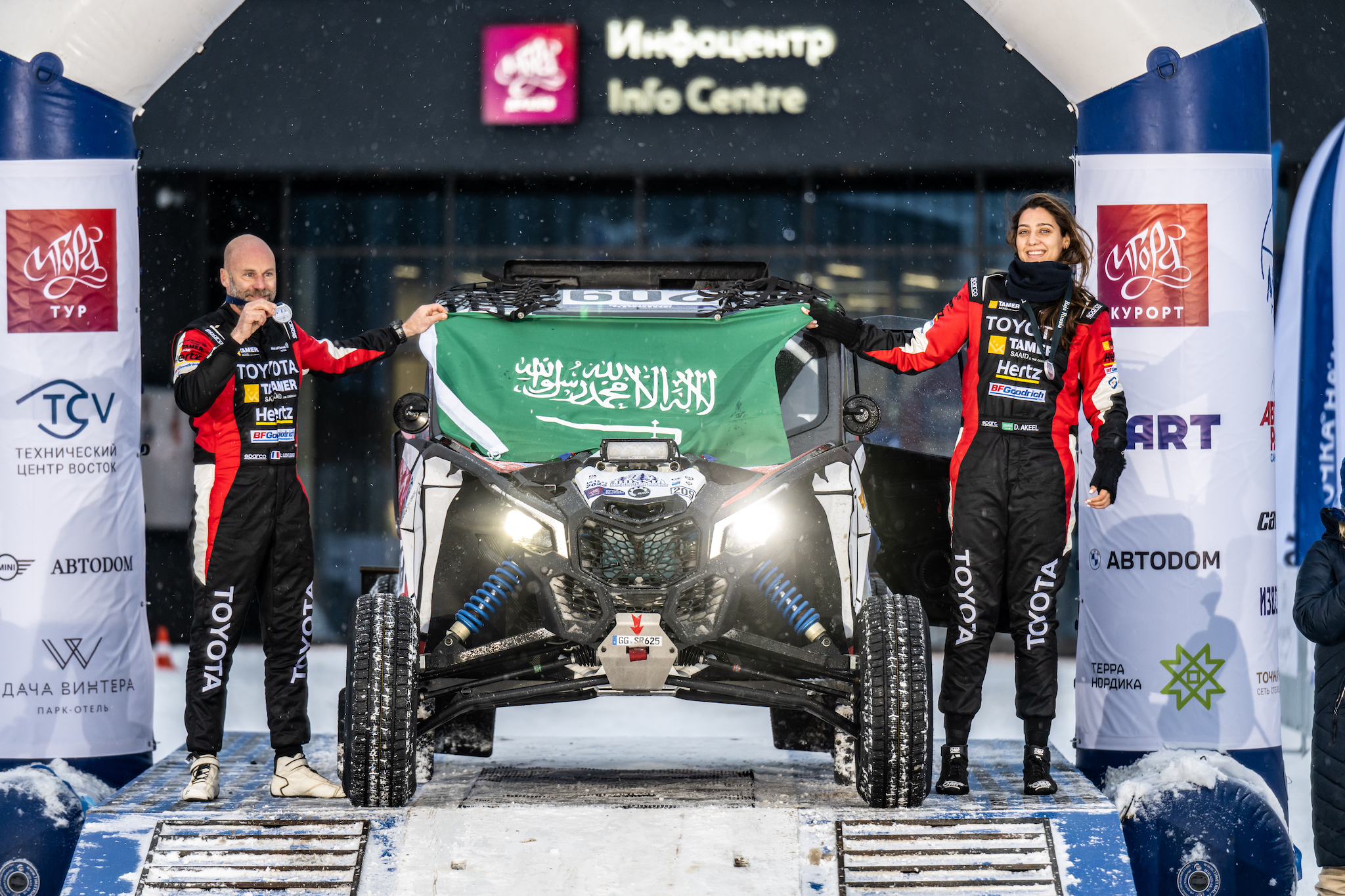 Saudi Arabian female driver Dania Akeel followed on from her successes at the Dakar Rally by finishing seventh overall in the FIA T3 category for lightweight prototype machines at the Baja Russia Northern Forest, the opening round of the 2022 FIA World Cup for Cross-Country Bajas.

Last year’s winner of the T3 category in the FIA World Cup for Cross-Country Rallies is planning a full programme of Baja events this season and this weekend made the switch from the recent desert-style racing in the Middle East to tackle the only ice and snow Baja in the world.

Dania drew on the navigational services of the experienced Frenchman Laurent Lichtleuchter on this occasion, and he guided her through the nine demanding special stages in her Can-Am Maverick X3, prepared by the South Racing Can-Am Team.

“It was an amazing race,” said a delighted Akeel. “It was so much fun to race in the snow. It was a great experience for me and I am so happy to have finished and to have picked up points.”

Based at the Igora Drive Sports and Entertainment complex – the largest of its kind in the Russian Federation – the event utilised forest roads and remote tracks through the northern Russian wilderness, where studded snow tyres were permitted and temperatures ranged from just below zero to -10˚C. This was a far cry from the baking heat of the Saudi Arabian dunes that Akeel experienced on her way to eighth in the FIA T3 category at the Dakar in January.

The 33-year-old began her campaign cautiously and set the ninth quickest time in the FIA T3 category through the Qualifying Stage. “It’s really fun to drive in the snow. I missed the first corner and had to reverse and go in. It’s a challenge being fairly new to the snow. But, honestly, by the end, I was picking up some more control on the turns. I feel very comfortable with the car and in this really fun and new environment.”

“Dania and I had a good feeling from the start and she adjusted to driving in the ice and the snow very quickly,” said co-driver Lichtleuchter after the first two stages, where Akeel had been sixth and eighth quickest in the T3 section. “We made no mistakes and we had a lot of fun.”

The Saudi pressed on over the next two passes through the pair of short stages and reached the finish of the leg in seventh place in T3 and within striking distance of the sixth-placed local driver Armen Puzian, who was vastly more experienced over this unique winter terrain.

“Really great, really nice before the snow started to go down (melt),” said Akeel. “I enjoyed it so much. The car was great. It was rocky and bumpy in a few places but I tried to avoid as much as I could.”

The longer of Sunday’s two selective sections ran for 116.98km between Romashki and Druzhnoye, while the second one looped around Druzhnoye for 94.10km.

Despite temperatures up around the zero-mark, snow flurries and a strong wind made it feel much colder than the previous day, but Akeel persevered over the challenging two specials to maintain her position to the finish and collect valuable championship points in her South Racing Can-Am.

She was classified 11th in the overall rankings with eight Eastern European drivers ahead of her, all of them able to call upon years of experience driving in adverse winter conditions.

The talented Saudi has recently signed a multi-year title sponsorship partnership with ALJ Toyota and is receiving additional support from Tamer, Hertz and BF Goodrich for her challenge for honours in the 2022 FIA World Cup for Cross-Country Bajas.

There’s little rest for Akeel and the 2022 FIA World Cup for Cross-Country Bajas competitors as the championship moves to Jordan for Round 2 this coming weekend (17-19 February).