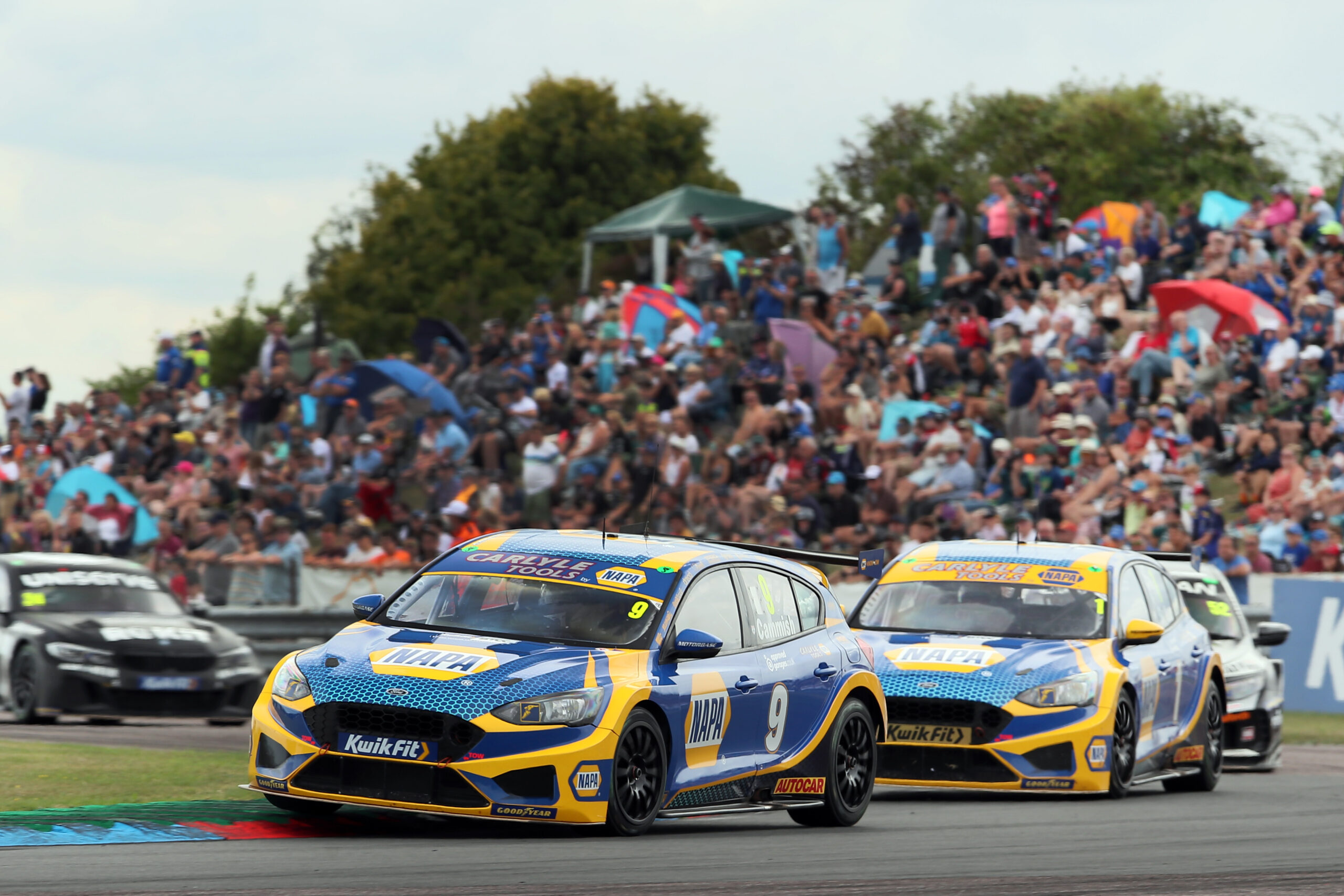 Dan Cammish and Ash Sutton celebrated a stunning day for NAPA Racing UK, as the duo took a win apiece at Thruxton earlier today (28 August), as well as the squad’s first ever one-two in the Kwik Fit British Touring Car Championship.

Furthermore, reigning champion Sutton edged himself closer to the summit of the Drivers’ Standings, as he reduced to gap to just six points behind championship leader Colin Turkington with just six races of the season remaining.

Rich Energy BTC Racing’s Josh Cook kept his title chances alive with victory in the reverse grid finale as the Thruxton King made it a perfect ten triumphs in Hampshire.

Cammish cruised to a lights-to-flag success in the opener as early race drama kicked off behind him.

While Cammish sailed off into the distance there was contact between the chasing trio going into the first chicane, as Jake Hill, Sutton and Cook ran three abreast through the tight right-hander.

All three cars emerged unscathed but a further skirmish between Sutton’s Focus and Cook’s Honda at the next segment of the Complex sent the latter spinning down the order.

The excitement continued throughout the first lap with Tom Chilton’s Bristol Street Motors with EXCELR8 TradePriceCars.com Hyundai seen skating across the grass at very high speed, whilst contact at the final corner involving Ricky Collard’s Toyota GAZOO Racing UK’s Corolla was another moment of note from the frenetic opening tour.

When the dust finally settled it was Gordon Shedden’s Halfords Racing with Cataclean Honda in second, as the Scotsman cleverly picked his way through the squabbles in front of him.

Sutton settled into third and would eventually go on to score his 60th BTCC career podium from just 199 races, as the positions at the front remained unchanged for the remainder of the bout.

Then came NAPA Racing UK’s first-ever one-two finish in the UK’s premier motorsport series as Sutton took the win ahead of team-mate Cammish in Race 2.

Cammish dominated proceedings as the Yorkshireman looked to double-up following his opening race success, but with the Drivers’ title on the line the team made the decision to let Sutton through with two laps to go.

Halfords Racing with Cataclean’s Shedden dropped to third in the early running and remained there throughout, whilst ROKiT MB Motorsport’s Hill had a relatively lonely race to take fourth.

Incredibly, this was the 200th BTCC race for Sutton and 400th for Shedden, and both triple champions ended their milestone moment with significant silverware.

There was still time for Cook to claim his tenth BTCC career victory at Thruxton as the Rich Energy BTC Racing star ended a challenging mid-season run on a high at his favourite circuit.

Cook has won 18 times in the UK’s premier motorsport series, with an incredible ten of those coming in Hampshire after his reverse grid success this afternoon.

The 31-year-old had to scythe his way past the Team BMW duo of Turkington and Stephen Jelley to win this one, as his Honda Civic Type R proved the class of the field in a commanding finale.

Turkington and Jelley completed the podium, as the former pulled six points clear in the race for the championship, whilst Toyota GAZOO Racing UK’s Butcher rounded off his encouraging day with a fourth-place finish.

As drivers and teams now prepare for the penultimate event at Silverstone in four weeks’ time (24/25 September), Turkington leads the standings from Sutton, with Ingram, Hill and Cook close behind.

Autobrite Direct with JourneyHero’s Bobby Thompson has one hand on the Jack Sears Trophy, whilst Jake Hill now tops the Goodyear Wingfoot Award.

Dan Cammish said: “It feels like a long time coming to get some good results.

“It was one of those funny races where because when you’re not under much pressure from behind you can let your mind wander a bit and then you realise that they’re starting to catch you and then you’re like how do I get back into a rhythm here.

“We got that first double podium so it was a great start to the weekend. We had a fantastic second race with another great start. We led from the front and I had no doubt we were going to bring that home, but it was the right choice and if this makes the difference then it will all be worth it.”

Ash Sutton said: “If you need a team-mate, then Dan [Cammish] is the man for that. He’s just shown that he’s supporting the campaign and hopefully soon I can repay the favour.

“We got the fastest lap in at the start and then I tried to focus on getting a mix going on behind me, with Shedden and Hill getting involved with each other. So I let that happen and when they started battling I thought ‘right let’s crack on’ and then the call came to switch positions.

“It was a good solid start in Race One too. A bit of chaos and not enough room left for me on the right but that’s racing. I’m happy for Dan, he got the win that he needed.”

Josh Cook said: “That car was just unbelievable to drive. You search for that sweet spot in the car, ultimate pace, and not working the tyres too hard – I barely had any tyre degradation. I’m still speechless. It’s been a tough few months so to get that for the team, that meant a lot.

“The BMWs are quick and as soon as they switch their tyres on they’re too quick, so I had to pounce while they were still building everything up to temperature. Then I just got my head down and it was quali lap after quali lap, and I was expecting the car to drop away but it never did.”