COOK SERVES UP A DOUBLE BEFORE TURKINGTON STRIKES BACK

By Emma Illman15th May 2022Uncategorised 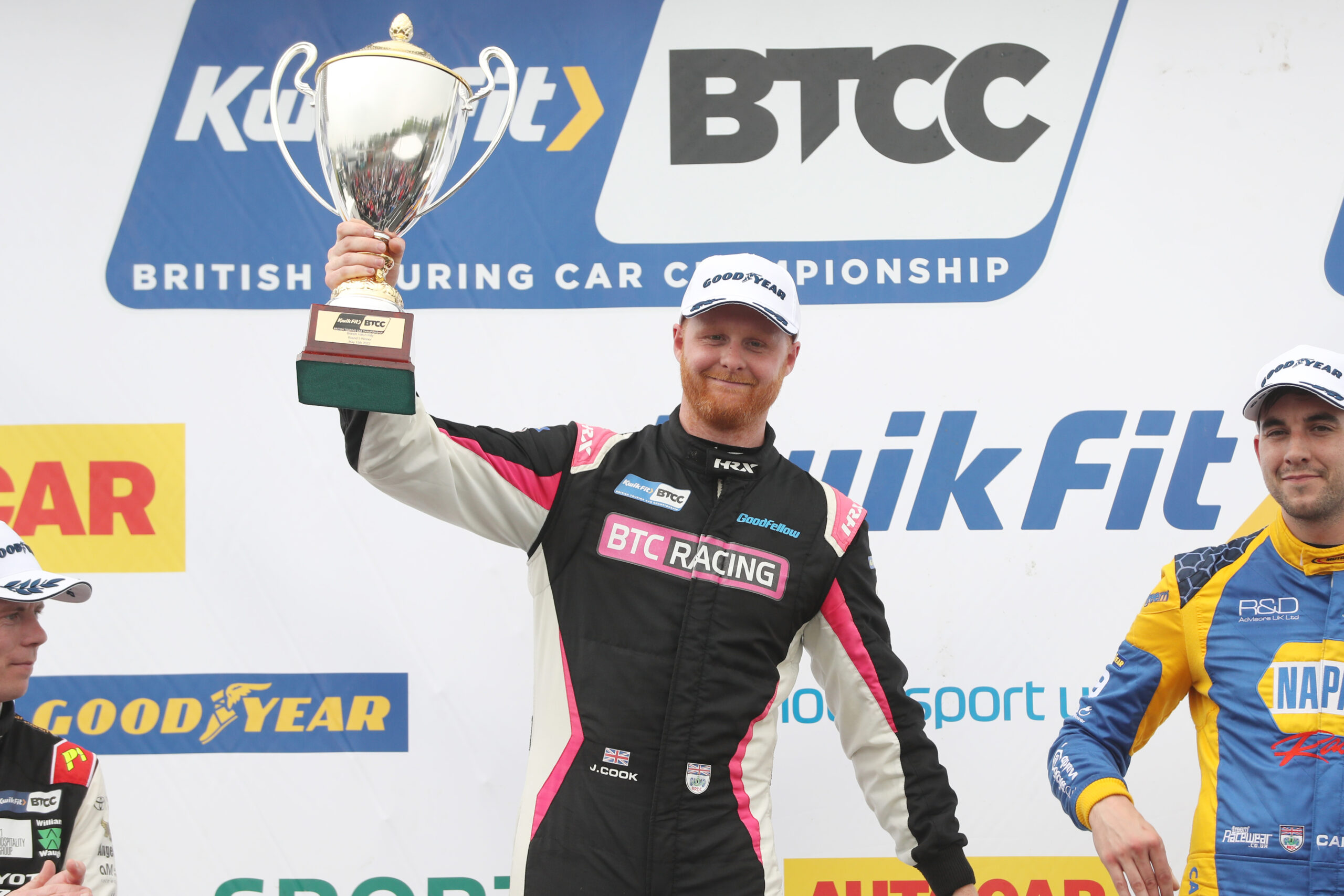 Josh Cook claimed a memorable Kwik Fit British Touring Car Championship double at Brands Hatch today (15 May), before four-time champion Colin Turkington bounced back with a win in the finale at the famous Kent venue.

Team BMW’s Turkington topped an incredible BMW 1-2-3-4 during qualifying on Saturday, but it was all change when a damp race day ensued come Sunday.

Cook – starting fifth on the grid – gradually carved his way by the Bavarian machines to win the opening race around the 1.21-mile Indy circuit, before the Rich Energy BTC Racing star produced a commanding lights-to-flag success in the second bout.

With rain falling for much of the morning, the vast majority of runners selected Goodyear wet tyres for the first race with the front-running BMWs initially leading the way.

Pole-sitter Turkington went side-by-side with stablemate Jake Hill through Paddock Hill Bend for the first time, whilst Cook took the wide line to get the better of Team BMW’s Stephen Jelley.

Cook made his life somewhat more difficult, however, as he briefly ran off-track to hand Jelley the position back shortly after. As the duo squabbled in the early stages it allowed the leading Turkington and ROKiT MB Motorsport’s Hill to scamper away.

Jelley was the first of the BMWs to falter as Cook nipped back by at Druids on lap seven, but both Turkington and Hill also began struggling with their tyres by mid-distance.

Hill then ran wide at Clearways as Cook squeezed into second, and five laps later he was leading following a good move by Turkington at Paddock.

Cook calmly went about his business for the remainder of the contest as the Bath racer took his first win of the 2022 season, and he would soon become the first double winner of the new campaign.

Bristol Street Motors with EXCELR8 TradePriceCars.com’s Tom Ingram and NAPA Racing UK’s Dan Cammish also benefitted from the fading pace of the BMWs to impressively complete the podium positions, whilst Hill and Turkington had to settle for fourth and fifth respectively.

A fantastic race ensued in the next bout, building towards an exciting climax as the cars of Cook, Hill and Cammish ran nose-to-tail in the closing stages.

The BMW 330e M Sport of Hill clipped the kerb at Druids on lap 22 of 24 as he spun out of contention, with Cammish eventually finishing just +0.253s behind Cook as the chequered flag fell.

Butcher inherited third following Hill’s spin, whilst Ash Sutton made it a double celebration for NAPA Racing UK with fourth.

West Surrey Racing and BMW eventually overcame its struggles in the final race as Turkington went with a full wet setup to take the spoils.

Reversed-grid pole-sitter Tom Chilton held station off the line and even withstood an early safety car spell, which followed an off at Druids for Rich Energy BTC Racing’s Jason Plato.

The Bristol Street Motors with EXCELR8 TradePriceCars.com Hyundai couldn’t hang on, however, as Chilton was gradually relegated down the order before pitting with a problem.

The story of the race was developing behind as an opportunistic move from Bobby Thompson pushed the Autobrite Direct with JourneyHero racer into third.

Chilton’s day eventually ended in the gravel as another safety car period was called for late on, with all eyes on the two BMWs and Thompson’s Team HARD-run Cupra.

The West Surrey Racing duo of Turkington and Hill remained line astern until the finish, whilst Thompson crossed the line for his first-ever podium in the UK’s premier motorsport series.

It was a fitting and celebratory end to a wonderful weekend as Brands Hatch welcomed a big crowd, whilst the BTCC starred live on ITV for the first time in 15 years.

Sunday’s race day commenced on ITV4 – the home of the BTCC – for the opening race before action switched to ITV for races two and three.

Consistent top five finishes throughout the day for Ingram ensured the 28-year-old maintained his lead at the top of the Drivers’ Standings, with ‘star of the day’ Cook now just eight points in arrears.

EXCELR8 Motorsport/Hyundai heads the Manufacturers’/Constructors’ order, as does its Bristol Street Motors with EXCELR8 TradePriceCars.com outfit in the Teams’ table.