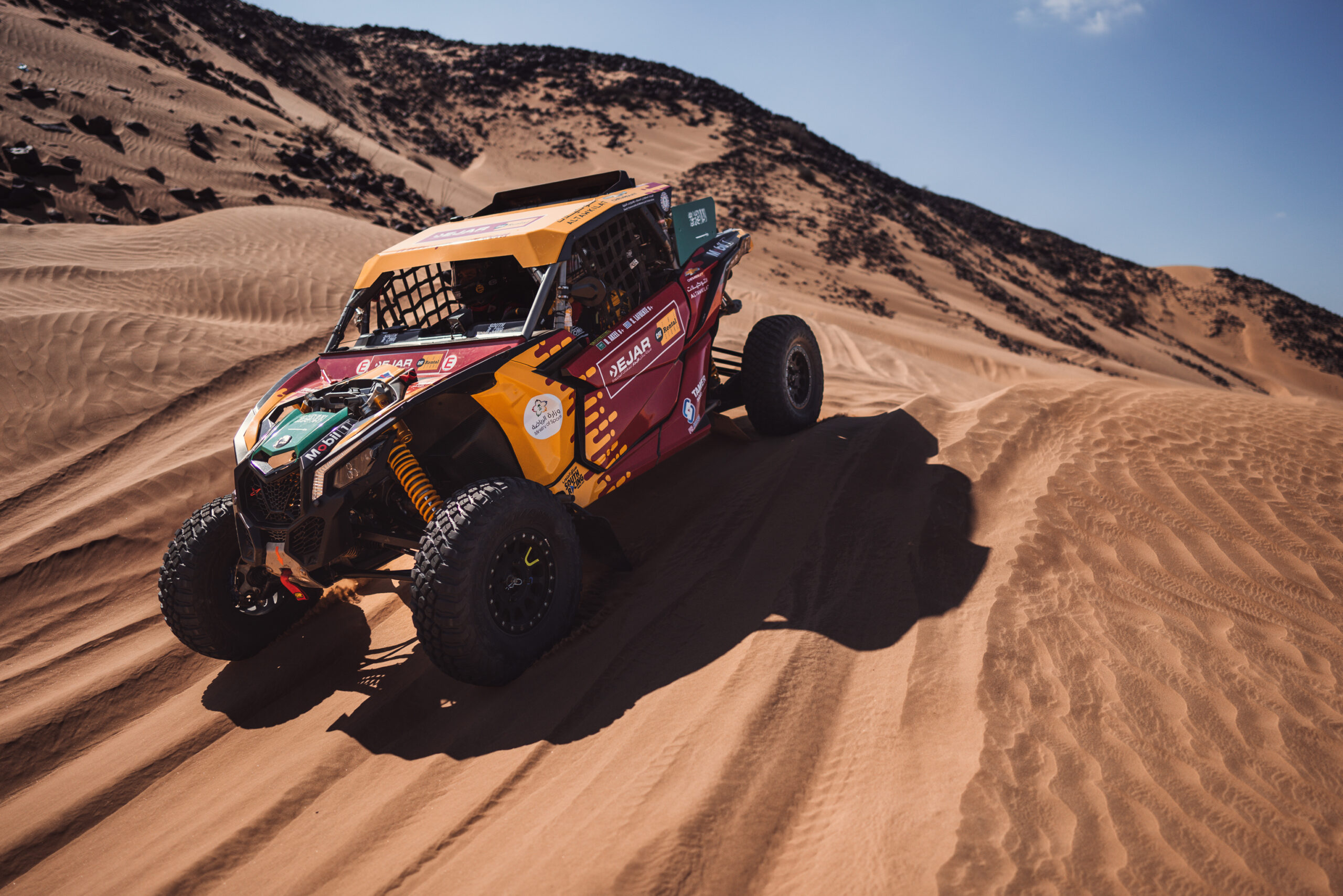 Saudi Arabia’s top female driver Dania Akeel remained firmly on course to achieve her goal of finishing the gruelling Dakar Rally, as the event reached its halfway point with a rest day in the Saudi capital of Riyadh on Saturday.

Akeel began the gruelling two-week off-road adventure through the remote deserts of Saudi Arabia alongside 47 rivals on New Year’s Day. Having started steadily, she gradually fought her way through the field in stunning fashion to currently hold an impressive sixth overall in the FIA T3 category for lightweight prototype vehicles.

Akeel teamed up with Uruguayan navigator Sergio Lafuente for the first time and is driving a Can-Am Maverick XRS, built by the German South Racing team and run on the event by their Dubai-based subsidiary South Racing Middle East.

The talented Saudi already has the 2021 FIA World Cup for Cross-Country Bajas T3 crown under her belt and further benefited from pre-Dakar training sessions with French veteran driver Christian Lavieille.

“I have really learned about the car, more about control and how fast you can go. I can brake later, go faster and I’ve learned a lot of that from Christian. How to position the car to enter a corner. There’s nothing I have been stuck on. I have faced many different situations during last year and that is helping me on the Dakar.”

Action got underway on New Year’s Day with a 19.51km Qualifying Stage held over challenging desert terrain between Jeddah and Hail. Dania began her Dakar campaign cautiously on the stage, near Medina, and reached the finish in 22nd of the 48 classified T3 runners.

Heavy overnight rain had made the second part of the opening stage through the An Nafud desert particularly treacherous and rally officials had also added in several tricky navigational sections that caught out many of the top drivers on the loop section to the north-west of the city of Hail.

Akeel completed the special in 15th position amongst the T3 runners and climbed impressively to 16th overall.

Heavy rain and flooding forced race officials to abandon plans to use a remote bivouac for competitors at Al-Artawiyah the following day. The 338.43km stage ran normally for the FIA vehicles but the Marathon segment (no service assistance) was cancelled and competitors were guided to a drier and more hospitable bivouac at Al-Qaisumah.

Akeel drove at a sensible and measured pace to reach the finish in 18th position and climb two places to 14th in the overall T3 standings. The Saudi continued her determined push through the field on the subsequent loop stage through the dunes and camel grass around the Al-Qaisumah bivouac and the 12th quickest time enabled Dania to move up three places to 11th.

Stage four was the longest of the entire Dakar and ran for 464.76km between Al-Qaisumah and Riyadh. It was a varied special with a mix of every challenge that a Dakar competitor could imagine. As the event headed south, temperatures also began to rise. Akeel again drove impressively without making mistakes to card the 10th quickest time and continue her climb through the field to eighth.

Day five was centred around the bivouac in Riyadh and FIA competitors tackled a loop stage of 394.81km with motorcycles and quads competing over a slightly shorter test. Akeel continued to impress and overcame everything that the Saudi desert could throw at her with aplomb.

The Can-Am driver finished 12th on the day but, more importantly, she overhauled Portuguese Mario Franco and the experienced Italian Camelia Liparoti to snatch sixth place.

For stage six, cars crossed the shorter route that had been used by the motorcycles and quads the previous day before reaching the rest day bivouac in Riyadh, as Akeel preserved her position and duly arrived in Riyadh in sixth place in T3.

The second half of the 44th Dakar Rally will feature a further six selective sections that wind their way deep into the remote Empty Quarter of southern Saudi Arabia before turning west, via bivouacs and loop stages around Wadi Ad Dawasir and Bisha, to reach the Red Sea city of Jeddah for the ceremonial finish on January 14th.