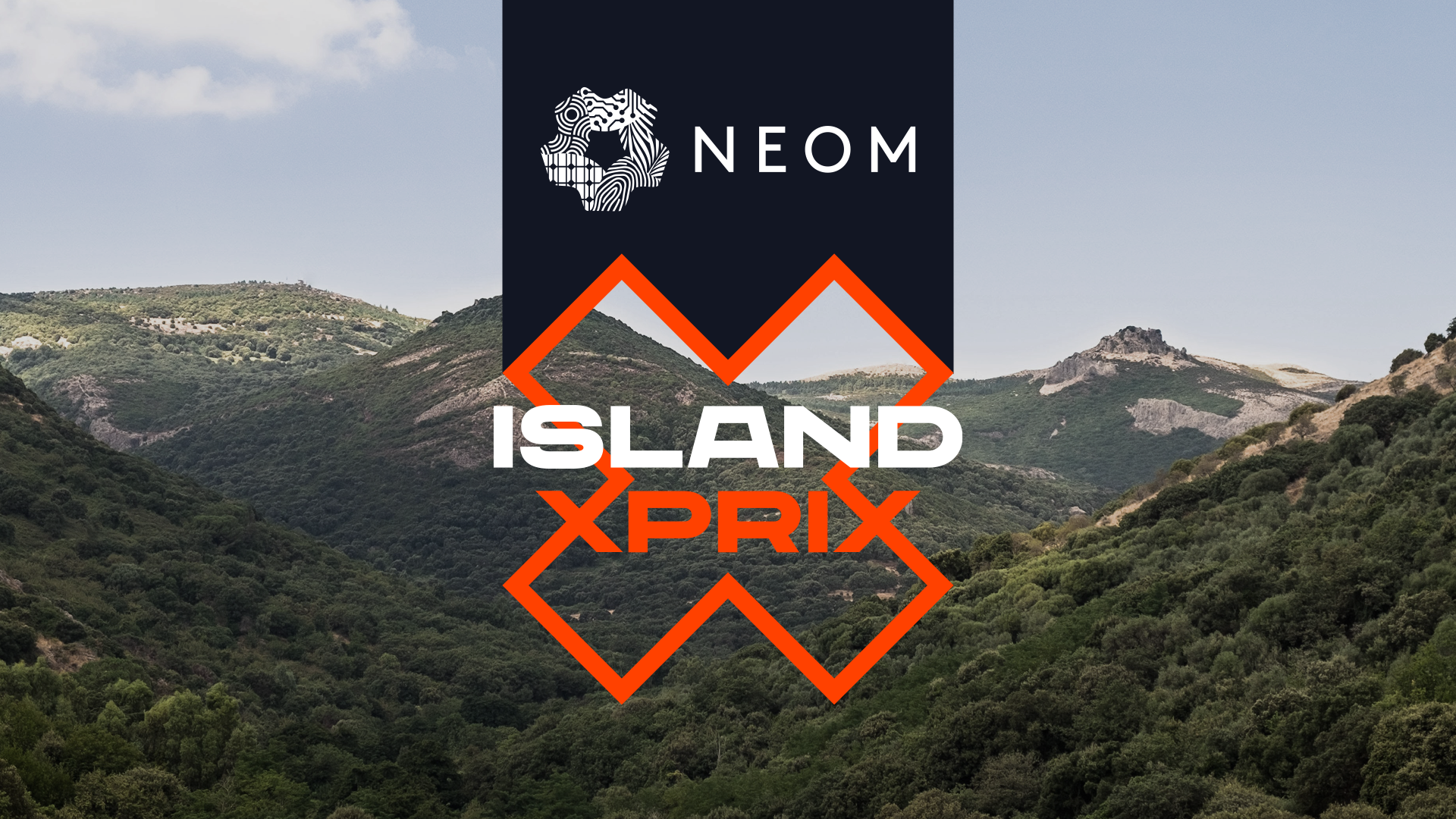 The countdown is on to the first-ever double header Extreme E event, as the Championship returns to the Italian island of Sardinia for a summer showdown of back-to-back racing next week (6-7 and 9-10 July).The newly-titled NEOM Island X Prix, co-organised by the Automobile Club d’Italia and Regione Sardegna, is just days away, the scene is set for double the on-track action and double the impact in the fight to tackle climate change. NEOM’s title sponsorship of the Island X Prix follows this week’s announcement that Extreme E has entered a multi-year relationship with ENOWA, NEOM’s energy, water and hydrogen subsidiary, to introduce green hydrogen power to their global sustainable racing series.

Extreme E continues to showcase innovative sustainable solutions whether it be demonstrating the full potential of e-SUVs or delivering legacy programmes at race locations.

The event will be returning to the Season 1 location of the Army Training area at Capo Teulada in Sulcis-Iglesiente. The Teulada route is ideal, providing a challenging backdrop for the course which will measure around seven kilometres.

Due to the hot summer conditions in July, the terrain will be much drier than last year’s Enel X Island X Prix with the drivers having to navigate a harder, more compact surface riddled with rocks, bushes, and dry riverbeds cracked from the heat.

The purpose-driven message of the series will focus on blue and green carbon restoration in Sardinia. Continuing to work alongside the MEDSEA Foundation (Mediterranean Sea and Coast Foundation) to support two significant projects.

For Round Two, the first project explores Green Carbon. The sport for purpose Championship will be returning to Sennariolo to visit the communities impacted by the devastating wildfires in 2021.

As for Round Three, the second project supports the conservation of Posidonia oceanica (seagrass), mitigating the detrimental effects of Blue Carbon in Mediterranean waters.

Extreme E has been working closely with Automobile Club d’Italia – the national sports federation co-organising and coordinating the event – the Region of Sardinia, and its Tourism Department plus the Ministry of Defense and the Italian Army to deliver what promises to be a week of double the racing and double the excitement.

Qualifying
Following on from the Desert X Prix, Qualifying 1 will be conducted in a single-car format over two laps, with each driver completing a lap of the course. Intermediate Classification points will be awarded to determine positioning in Qualifying 2, ranging from 10 points for first place to one point for last.

A team’s overall classification points will decide the order for which cars progress to Semi Final 1, Semi Final 2, and the Crazy Race on Day Two, but the points do not contribute towards the Championship standings.

If any teams are tied in the Qualifying standings their positioning will be determined by their time in the Continental Traction Challenge – the team with the quicker run through the allocated sector receiving the higher overall position in Qualifying.

The team finishing third in Semi-Final 1 or Semi-Final 2 that sets the faster Continental Traction Challenge time shall be deemed to be the 6th place finisher.

ENOWA Hyperdrive
The newly-titled ‘ENOWA Hyperdrive’ boost launches in Sardinia. The ENOWA Hyperdrive boost will be available to each driver on each lap of the race. Activated when the driver presses a button on their steering wheel, they will enjoy an increase in power for a fixed amount of time.

Enno Straten, Head of Strategy & Marketing, Continental Tires EMEA, said: “We are really excited for the upcoming Island X Prix double-header and are looking forward to once again proving the outstanding performance of our tires under the toughest and most challenging conditions.

“Although we have already raced in Sardinia, this time around it will be in a different season and will offer different challenges. We look forward to demonstrating that Continental is up to the test, as well as the thrilling racing throughout the week as Extreme E returns to action.”

Teams and Drivers
The same ten teams return to the grid to battle it out for NEOM Island X Prix victory and there are going to be some familiar faces in unfamiliar seats.

Championship drivers Timo Scheider and Tamara Molinaro will represent XITE Energy Racing in Sardinia. Scheider replaces Oliver Bennett, who is unable to race due to his commitments to Nitro Rallycross, while Molinaro retains her seat after an impressive performance for the team at the season opener.

Another driver who made their debut in NEOM was Hedda Hosås. Hosås, Veloce Racing’s reserve driver, will contest the NEOM Island X Prix double-header for Jenson Button’s JBXE alongside Kevin Hansen who has recovered from injury.

The Norwegian has close links to Extreme E, having recently been the reserve driver for Veloce Racing. Hosås was nominated by the team to take part in last season’s Rookie Test which followed the Enel X Island X Prix and raced in this year’s Desert X Prix following Christine GZ’s injury in Qualifying.

Replacing Scheider and Molinaro as Championship drivers will be Fraser McConnell and Klara Andersson. Andersson returns to Extreme E after Covid-19 cruelly denied her a drive for XITE Energy Racing in NEOM, while McConnell makes his debut having already become the most successful Jamaican driver in Rallycross history.

The 10 teams and 20 drivers for the NEOM Island X Prix are as follows:

The maiden Island X Prix last October proved to be a thriller. Season 1 Extreme E champions, RXR, executed a measured drive to claim the win after Chip Ganassi Racing and X44 were denied victory after suffering technical issues which ruled them out of contention, in what proved to be one of the most gruelling tests for the teams across Extreme E’s inaugural campaign.

The upgrades made to the ODYSSEY 21s during the break between X Prix, including a new race-ready suspension package courtesy of FOX, Extreme E’s new Official Suspension Partner, will undoubtedly be put to the test in Sardinia.

After four long months, Extreme E is set for on-track action once more with back-to-back X Prix in Sardinia.

The race is on again.