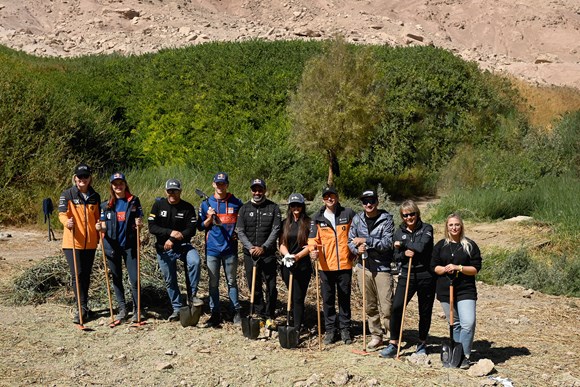 Ahead of the Antofagasta Minerals Copper X Prix in Chile this weekend (24-25 September), Extreme E has today embarked on its latest Legacy Programme

Extreme E’s drivers got their hands dirty preparing local habitat for the reintroduction of the Loa water frog in Calama, the gateway to the Atacama Desert.

The Loa water frog is a critically endangered aquatic frog, endemic to the Loa River in Calama, and vital to the upkeep of ecosystems in the area. The longest river in Chile, The Loa, crosses the desert for 440 kilometres and is fundamental for life in Atacama.

A decline in this already delicate system of biodiversity would result in food-web breakdown and the loss of important ecosystem services. The Loa water frogs play important ecological roles including natural pest control and contributing to the food chains. Their disappearance could cause systemic impacts, in both aquatic and terrestrial environments.

“One of the main concerns of the scientists involved in the conservation of this species is the recovery of its habitat. Extreme E’s project involves the clearance and preparation of the release site near Calama for the reintroduction of the frogs into the Chilean desert.

“Due to their permeable skin, frogs are very sensitive to pollutants so they will be a good indicator of the health of both aquatic and terrestrial environments. This will help us in understanding the impact of our work and what our next steps should be moving forward.”

Extreme E will not be alone in its Legacy Programme in Chile, as Antofagasta Minerals, the Copper X Prix’s title partner, will join the initiative through Minera Centinela, matching the contribution to be made to the Museum, with the aim of amplifying its impact as part of the triple alliance for the conservation and reintroduction of this species.

Carlos Espinoza, General Manager of Minera Centinela, added: “We believe that mining for a better future is mining that respects and protects its environment and all its species. In order to consolidate the recovery of the Loa water frog, it is essential that it returns to its natural habitat. That is why we support the management and conservation project led by the Calama Museum.”

The Antofagasta Minerals Copper X Prix takes places in the Atacama Desert, one of the driest regions in the world. A further rise in average annual temperatures in Chile will result in a further breakdown within ecosystems which are already struggling, as even the sturdiest of plants struggle to survive in an area that currently sees on average less than 2mm of rain a year.

In a symbolic act, the collaboration agreement between the Museum of Natural and Cultural History of the Atacama Desert, Extreme E and Minera Centinela was signed today (Thursday 22 September). After the signing, the Extreme E drivers together with a delegation from Minera Centinela and accompanied by the Museum team, participated in a cleaning activity in Ojos de Opache to improve the habitat where the Loa water frog will be reintroduced.

Osvaldo Rojas, Director of the Calama Natural History Museum, said: “In 2019, a desiccation alert warned us that one of the last habitats where this amphibian dwelled was drying up. This triggered a rescue operation, by which a group of scientists scouted whatever superficial waters remained and only found 74 Loa frogs – all of them in poor condition, underweight and with skin damage.

“60 of the rescued frogs were relocated to the Ojo de Opache creek, while only 14 of them became the passengers of a commercial flight that brought them from Calama to Santiago. Their destination was the Chilean National Zoo, where vets and scientists began one of the most incredible recovery feats in Chile’s natural history.”

René Aguilar, Vice President of Corporate Affairs and Sustainability Antofagasta Minerals, said: “At Antofagasta Minerals, sustainability is at the core of our strategy and of how we understand mining should be developed. In this context, our roadmap includes actions in climate change and circular economy, as well as regarding the protection of biodiversity. For us, it is essential to actively participate in the care of the environments in which our operations are located.

“After an adaptation and recovery program, the National Zoo now has 600 specimens of the Loa Frog, a very important step towards saving this species from extinction.”

Antofagasta Minerals focuses on saving freshwater resources and helping to improve biodiversity in the region, both of which will contribute positively to the reintroduction of the Loa water frogs.

They use untreated seawater in its sulphide line and optimises the use of water resources through recirculation systems. At the Los Pelambres operation, a desalinization plant is currently being built, meaning by 2025, 90% of the water Los Pelambres uses will be water from the sea and from recirculation.

The demand for metals to support electrification needs to meet our climate goals and should not be done at the expense of biodiversity. With the Antofagasta Minerals Copper X Prix, Extreme E aims to raise awareness of more sustainable mining methods and highlight the efforts of Antofagasta Minerals in spearheading some of the technical developments conducive to this goal.