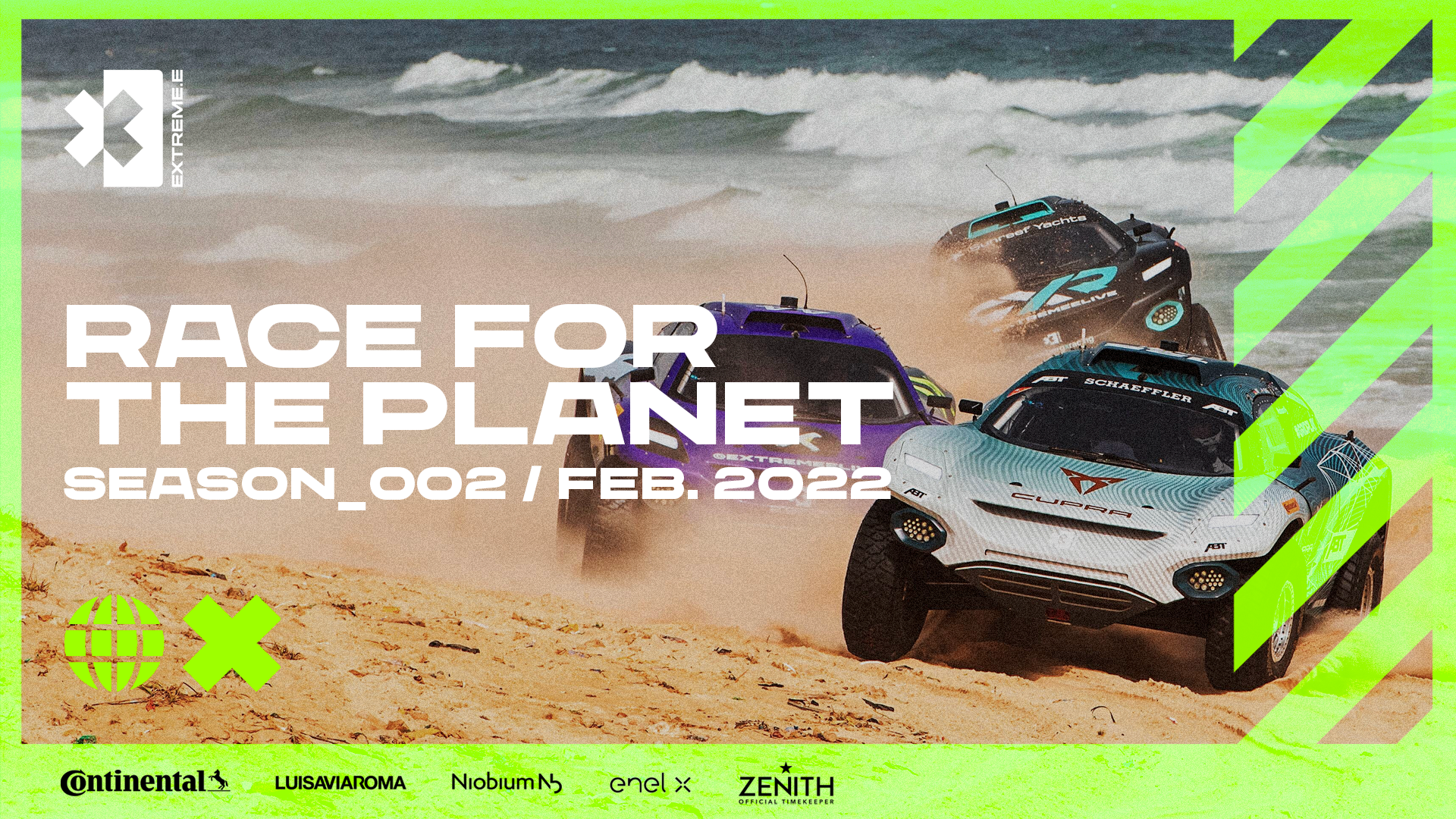 With the dust only just settling from the first season of Extreme E, it is now one month to go until Extreme E’s sport for purpose campaign returns with fresh faces, a major new team, and a new continent to visit, but with the same amount of thrilling wheel-to-wheel on track action being showcased across the toughest terrains on the planet.

Building on the success of its debut year in 2021, Extreme E Season 2 ‘ The Race For the Planet’ promises to captivate on and off track on a whole new level, whilst delivering on its overall purpose to tackle climate change through sport, starting with the Desert X Prix in NEOM, Saudi Arabia, 19-20 February.

Alejandro Agag, CEO and Founder of Extreme E, said: “Using our sport for purpose platform, Extreme E delivered truly ground breaking action in its first season, on and off the race course, and now we are ready to go and do it all again, with more experience and more determination than ever.

“As we embark on the second chapter of our story, we are proud to finally welcome Zak Brown and his McLaren team to the party and know they will make a huge impact, which we are all excited to see. We also add a new continent to our journey as we take our voyage to South America, a hugely important home, both for motorsport fans and the climate.

“In all this, however, we cannot lose sight of our overall purpose, that we are all together in a race for the planet. We feel more passionately than ever about the importance of using the platform of sport to raise awareness for climate issues and the solutions we can all be part of, under the great direction of our Scientific Committee, as we as a global community strive to keep temperature rise levels below 1.5°C. This is the race we can, and must win, and we all need to play our part.”

The inaugural Extreme E season was a thriller and went down to the wire, with Rosberg X Racing (RXR) taking the Championship on count back of victories after finishing the campaign tied on points with perennial fastest qualifiers in Season 1, Lewis Hamilton’s X44.

Nico Rosberg, inaugural Extreme E Champions RXR Racing Founder and CEO, said: “Winning the inaugural Extreme E championship was just incredible. But our team is about more than just winning. We’re also here to promote an important message. A key reason we exist is to drive awareness, educate and help tackle climate change and we aim to leave a lasting legacy that drives localized change in each location that Extreme E visits. Last year we were able to achieve some incredible things through this series and that was just the beginning. Looking forward to an exciting new season and hopefully another win for RXR!”

As well as returning to Saudi Arabia, Italy and possibly Senegal, Extreme E will make its highly-anticipated debut in South America with its final two X Prix of the campaign taking place in Antofagasta, Chile, and Punta del Este, Uruguay.

Excitement for Extreme E Season 2 is boosted further with motorsport giants McLaren joining the Championship for 2022.

McLaren has been a leader in electric motorsport from the outset, supplying the battery powertrain to the FIA Formula E Championship for the Gen 1 and Gen 2 seasons, employing the same technology pioneered in the McLaren P1 hypercar. With its entry into Extreme E, McLaren Racing will continue to build its know-how and expertise in the all-electric racing space.

Zak Brown, CEO, McLaren Racing, said: “From the outset, McLaren Racing has never been afraid to push new boundaries. This new venture is true to our roots of innovation and bravery. Extreme E is paving new ground in motorsport as a force for good in confronting some of the biggest challenges facing our world today and in the future.”

Both drivers will bring plenty of off-road prowess to the Extreme E grid for Season 2. Foust is a four-time and current U.S. Rallycross Champion (2019, 2012, 2011, 2010) and has also won four X Games gold medals (2013, 2010, 2007), alongside two Formula Drift Championships (2008, 2007). Gilmour became the first and only female to date to win a New Zealand Rally Championship event and also won the FIA Women in Motorsport and Qatar Motor and Motorcycle Federation (QMMF) crosscountry rally selection in 2015. The New Zealander also competed in two rounds of Extreme E Season 1 for Veloce Racing.

Extreme E’s Legacy Programmes are integral to the series and aim to provide both social and environmental support at each race location. Project selection is led by the location’s scientist and all five members of our independent Scientific Committee actively support these programmes.

The sport for purpose Championship selects projects that prioritise the empowerment of local communities, build resilience by helping the vulnerable to adapt to climate change, provide long lasting sustainable solutions and promote renewal energy sources that will grow economies while reducing carbon emissions. The series will continue to work with world leading experts in science, education and environmental research, to ensure the Championship’s credibility and effectiveness.

Extreme E is the only motor racing series in the world today that mandates that every team taking part must field both a male and female driver. This was a world first in motorsport, and as well as providing opportunities at the highest level of sporting competition, the series is strengthening this commitment to development at the grassroots level in its second season.

At the 2021 season finale in Dorset, UK, Extreme E was delighted to host an event for 50 local schoolgirls with female motorsport initiative Girls on Track UK.  Girls on Track UK (formerly known as Dare To Be Different) is an initiative started back in 2016 by former Formula One test driver, Susie Wolff. Now managed by governing body Motorsport UK, as part of FIA’s global Girls on Track programme, it focuses on inspiring, connecting and showcasing females in motorsport as well as through science, technology and maths (STEM).

The girls, all aged between 11 and 12 years-old, got to experience life behind the scenes of Extreme E – as well as being shown the many future potential career opportunities within the sport, with the series intention being to build on this work and inspire girls all over the world with these memorable insights throughout this new season.

With less than five weeks to go until the opening X Prix of the campaign, Extreme E Season 2 is all set to be another spectacular campaign.