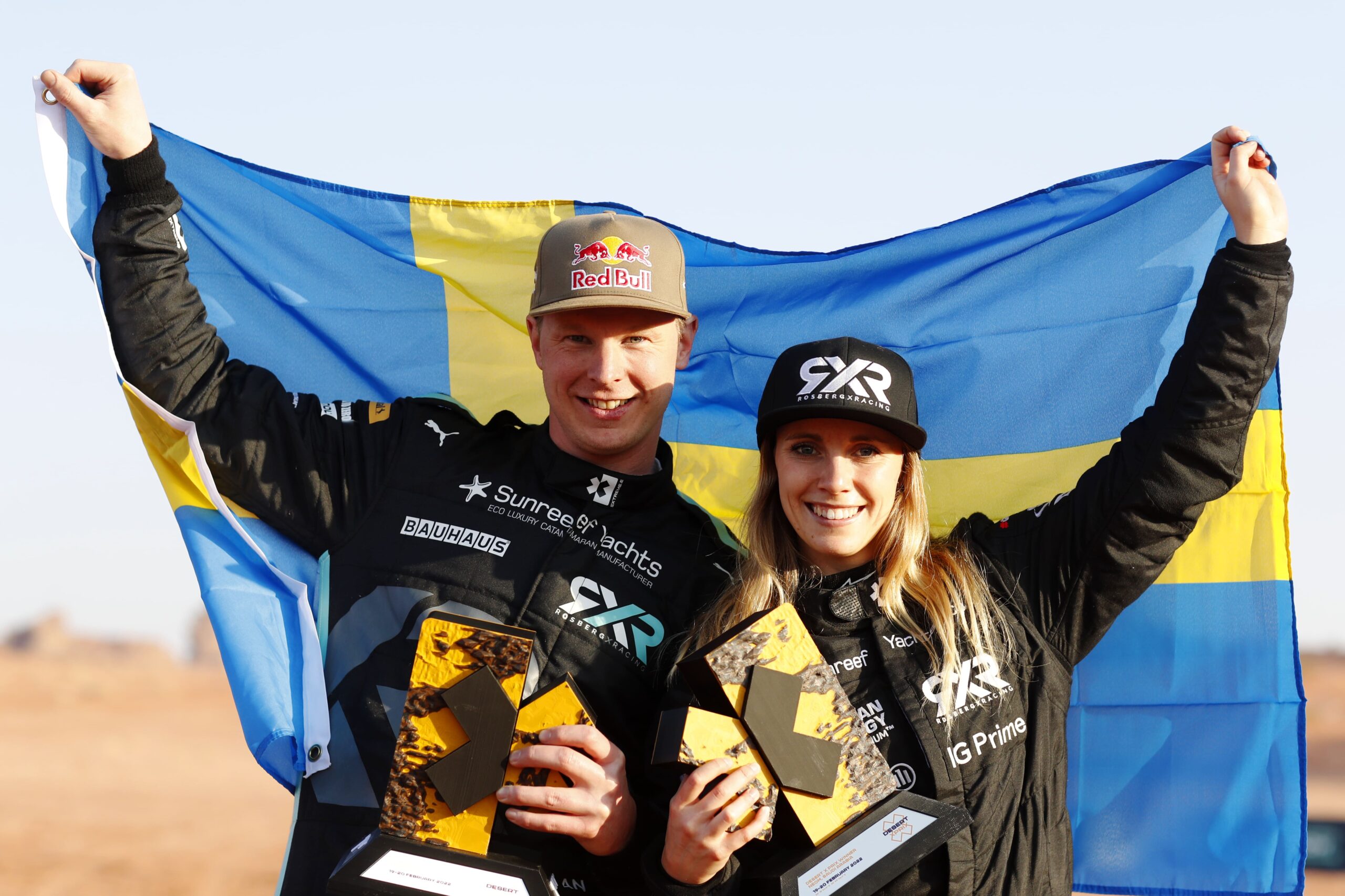 Rosberg X Racing (RXR) were the winners of the Desert X Prix in the Extreme E Season 2 opener in NEOM, Saudi Arabia.

Mikaela Åhlin-Kottulinsky and Johan Kristoffersson were the victors in a Final of two halves, as a red flag was brought out at the end of the first lap following a big accident for McLaren XE’s Tanner Foust, who in a bid for third place clipped the back of RXR’s Åhlin-Kottulinsky and rolled his ODYSSEY 21 on the opening lap.

The race resumed for a one-lap shootout, with the four teams released at intervals that matched how they had entered the Switch Zone.

X44’s Cristina Gutiérrez attempted to close down Laia Sanz in the ACCIONA | Sainz XE Team car, while Kristoffersson closed the gap on the two Spaniards from third.

The RXR driver soon passed Gutiérrez on the inside, setting his sights on Sanz. As the Desert X Prix entered its closing stages, Kristoffersson took a wide line into the second to last corner for an aggressive overtake on Sanz and secure a dramatic win ahead of ACCIONA | Sainz XE Team, with X44 completing the podium.

Chip Ganassi Racing came fourth having secured a spot in the Final with a win in Semi-Final 2, and McLaren XE finished fifth despite Foust’s crash having made an excellent comeback from Qualifying to win the Crazy Race.

Kevin Hansen was injured while competing during the Crazy Race. Kevin was taken to hospital for treatment and is being kept overnight for observation. Everyone at Extreme E wishes him a full and speedy recovery – and we look forward to seeing him back racing as soon as possible.

Johan Kristoffersson, RXR, said: “It feels really good, but every week feels good. Every time we go for a race we have the aim to win, but the competition is so high this year, especially with McLaren coming in, which raises the bar even higher. We learned quite a lot last year, but now things are even tighter we’ll have to work even harder. I’m just very happy to start off the season with maximum points.

“It was a bit tricky, the track rutted up quite deep, and neither me nor Mikaela have a lot of experience in the desert, but we worked hard and the team has done a fantastic job with analysing the course and analysing the other drivers. We worked to adapt and it was a good weekend.”

Mikaela Åhlin-Kottulinsky, RXR, added: “I know that Johan is an amazing racer and the tactics this weekend were that if I wasn’t first out of turn one it was just to make sure that the gap didn’t get any bigger. I knew that the ten seconds he had to make up in the Final he could make them up and it was exciting to watch. I was holding my breath at waypoint 22, but I was fully confident overall!

“This is my first win so of course it feels really great and even better to do it having just entered the team. There have been quite a few incidents out there and we managed to avoid that and keep the car in one piece, so it was a good weekend.”

Laia Sanz, Acciona | Sainz XE Team driver, said: “I think I did a good job, it was good but Kristoffersson is just too fast! But I think we must be happy with the result especially after a hard day yesterday and Carlos did an amazing job in the first lap and then things were much easier in the second one.

“On the red flag restart – at first, I thought this could not be fair because Carlos did a great job in the first lap and in the start. So I think Extreme E made a good decision in how they did the restart – it was the best solution.

“We saw today that we can fight to win races and this give us so much confidence and motivation. I knew last season and with taking part in the Dakar it would be a big help compared to last year in Extreme E where I started from zero. I’m happy with my improvements since then and also very happy to have such a good teacher in Carlos.”

Carlos Sainz Snr., Acciona | Sainz XE Team, said: “The result is great and we turned the page this morning. We forgot about yesterday and said ‘we are in the Semi-Finals, anything is possible’. We just had to get to the Final and then see what happens. I’m really pleased and hopefully we can keep going on this way.”

Sébastien Loeb, X44, said: “It was a good weekend for us. We had the best time in Free Practice and Qualifying 2, then we won our Semi-Final so until the Final it was perfect. In the Final I had a good run, I was second right behind Carlos, and Cristina took the car after and I think she did well. She managed to follow Laia in the dust and held off Johan for a long time. We were third and that’s not a bad start to the season.”

Cristina Gutiérrez, X44, added: “In the Final we had some problems. It is not an easy course to overtake and defend, and it was a difficult situation for me to attack Laia and defend from Johan without my hyperdrive. But the car is much better this year, which is nice for the Championship. We work with the team on this all the time and for me it is an incredible opportunity to keep learning and a good challenge for me.”