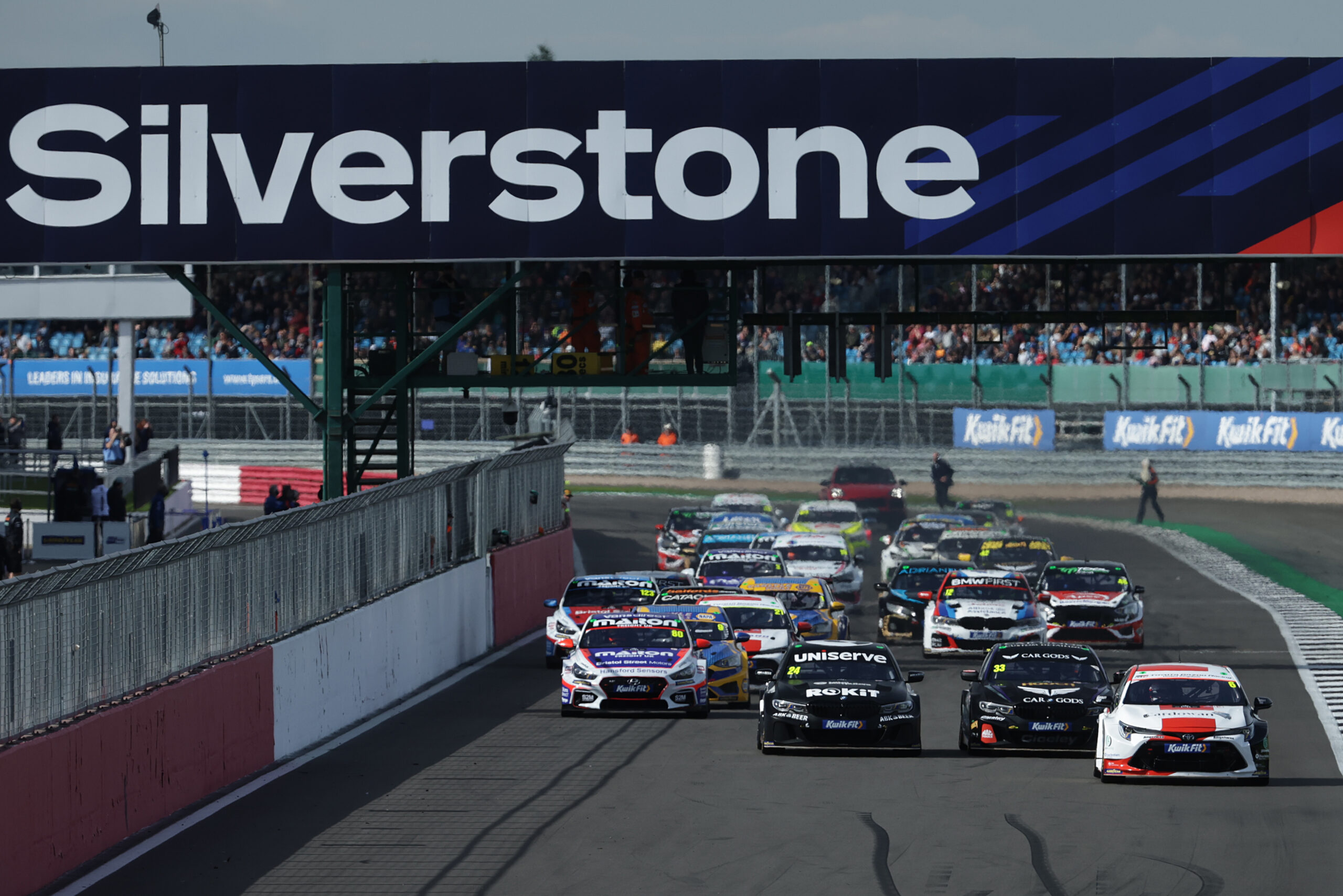 The 2022 Kwik Fit British Touring Car Championship is set for a sensational showdown after a stunning penultimate day of racing at Silverstone today (25 September) left three young stars covered by an incredible seven points at the summit of the Drivers’ Standings, whilst a four-time champion remains poised in contention behind them.

Reigning champion Ash Sutton leads the way after another solid performance for the NAPA Racing UK driver, but a win apiece for ROKiT MB Motorsport’s Jake Hill and Bristol Street Motors with EXCELR8 TradePriceCars.com’s Tom Ingram hauled the dynamic duo to within striking distance of securing a maiden title.

Toyota GAZOO Racing UK’s Rory Butcher enjoyed his best day of the season with a podium hat-trick, including a win in the opener, although the Scotsman is now mathematically out of the reckoning to win the most coveted prize in British motorsport.

Team BMW legend Colin Turkington went into the weekend leading the standings but left the Northamptonshire circuit with his championship chances in the balance following a dismal day for the Northern Irishman.

Butcher’s recent impressive run at Silverstone continued in the opening race, as he claimed a commanding lights-to-flag victory.

The 35-year-old took two triumphs around the 1.64-mile National Circuit last year, and he followed that up with pole position and a first win of the 2022 season here today.

Butcher stormed clear in the early running before he was hounded down by the BMWs of Hill and Car Gods with Ciceley Motorsport’s Adam Morgan late on. The race leader dealt with a safety car period in the closing laps, followed by intense pressure from behind, to eventually cross the line for his tenth BTCC career victory.

Hill then produced one of the standout moves of the season that fired him to victory in the next encounter.

The Kent driver lost second place to Halfords Racing with Cataclean’s Gordon Shedden in the opening laps, before Hill impressively reversed the positions around the quarter distance mark.

The move of the race came on lap 12 of 24 as Hill made the undercut through Luffield and Woodcote, completing the pass for the lead before Copse, as the huge Silverstone crowd watched on.

Butcher managed to hang on from Shedden to complete the podium, but it was Hill that quite rightly took the majority of the plaudits.

The pair expertly diced in what was a respectful battle, particularly impressive when considering there’s a potential title on the line.

Ingram cruised to victory in the final race as he brought the curtain down on a wonderful penultimate day of racing in the 2022 BTCC season.

There was contact between pole-sitter Josh Cook and NAPA Racing UK’s Dan Cammish off the line, as the former squeezed the latter towards the pit wall, with Car Gods with Ciceley Motorsport’s Morgan also briefly caught up in the melee.

There were a number of other dramatic moments on the opening lap, most notably when further contact between Morgan’s BMW and the Rich Energy BTC Racing Honda Civic Type R of Cook let Ingram, Sutton and Butcher through at Becketts.

Hill – one of the undoubted stars of the day – was also hit pretty hard at Brooklands by Shedden’s Team Dynamics Honda as a gaggle of cars scrambled for position on the opening tour.

The #24 BMW managed to survive the scare and then Hill immediately set about carving his way back through to fourth at the finish. The same unfortunately couldn’t be said for BMW stablemate Turkington, who could only manage 12th in the finale after a race one incident left him playing catch up for the remainder of the day.

So, it’s advantage Sutton ahead of the triple header finale at Brands Hatch, whilst Hill is just five points in arrears with Ingram a further two back. Turkington is 27 points off the summit, but with 67 still on offer, it remains all to play for at the famous Kent circuit next month.

Despite the disappointing day BMW still tops the Manufacturers’/Constructors’ Standings, although relinquished the lead of the Teams’ order to NAPA Racing UK.

Bobby Thompson has one hand on the Jack Sears Trophy with three races remaining.

Rory Butcher said: “It’s been a fantastic day! After a double victory last year, I’ll take three podiums today so that’s made up for it. I’ve had some really good racing today, me and Jake [Hill] had a great drive in the first two races and then I got tucked up behind Ash [Sutton]. I just didn’t really have the legs on Ash to mount any pressure and also the guy’s fighting for a championship and so is Tom [Ingram] so you’ve got to take that into account, and they drove brilliantly.

“The car’s been amazing today – we proved it there. We suffered a little bit in the final sector earlier today, but we definitely found a little bit more performance there, so it was good.”

Jake Hill said: “That is possibly my most important win! It’s just such a nice feeling because I was so cautious coming into this weekend; I didn’t think the car would be where we needed to be pace-wise. In the past it’s not necessarily been a race-winning car, but we’ve come here, stuck it on the front row, got a second and now a win. I’m just super, super proud of everyone. They’ve done such a fantastic job. Craig continues to send that support from his hospital bed, we’re such a team here at West Surrey Racing and that’s what’s important.

“Both moves I made were good. Flash [Gordon Shedden] just left half a door open and that was enough, I managed to get up the inside. He put me on the grass on the inside a little bit on the exit, but I’m already there at that point. And then the move with Rory [Butcher] was totally fair, not a single touch. I really love racing Rory. He’s always been good to me and vice versa. That nice little cutback move filled me with joy.”

Tom Ingram said: “We really, really needed a good result to bring us back in because those first two races were good and pointsy but not quite pointsy enough. We knew we needed to get back in because obviously Ash [Sutton] was fast, Jake’s [Hill] been fast all weekend, so it was really important to get that one in the last race.

“Ash and I were just chatting then, we said we couldn’t have asked for it to have gone any better, it’s exactly like Moses. The sea parted, and I thought ‘oh, no, surely this isn’t working out for me?’ We needed a bit of luck because we’ve sometimes been on the other side of it. We needed luck to get that move to happen but I’m super, super pleased to get it done because, as I say, it is absolutely on! The three of us. Seven points in it. I’m not going to sleep between now and Brands – let’s get going!”

Ash Sutton said: “It’s like it’s been scripted all year! It couldn’t be tighter, you’ve got a great combination of front-wheel drive cars and rear-wheel drive cars, and Brands Hatch is our home circuit for the team. This is our weakest circuit and we’ve had a mega weekend so I’m looking forward to Brands.

“We’re in a really good place with the car. The second half of the season I’ve really felt at one with it. I’ve been able to tweak it, dial it in, get it right, chip away at it, and it got us into the championship lead. I couldn’t have asked for anything more going into the final rounds.”