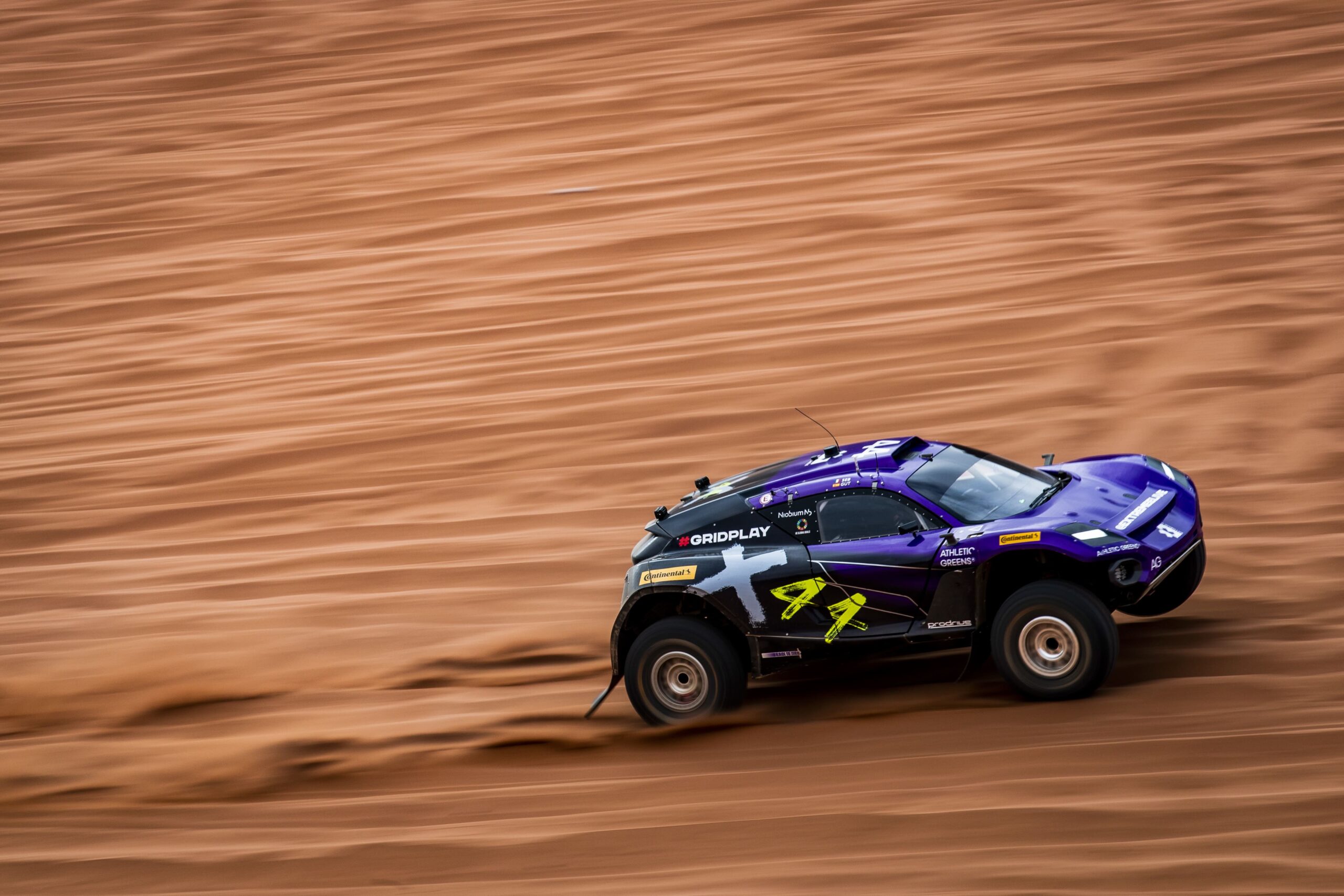 After finishing a close second in Qualifying 1, Sébastien Loeb and Cristina Gutiérrez dominated their Heat in Qualifying 2 to top the overall Qualifying standings ahead of Finals day.

Rosberg X Racing’s (RXR) Johan Kristoffersson dramatically passed Genesys Andretti United Extreme E’s Catie Munnings to take the win right on the finish line in Heat 2, but a time penalty dropped them back to fourth, and fifth overall, after topping the timesheets in Qualifying 1. As a result, Genesys Andretti United Extreme E took the win to end overall Qualifying in second place.

Cristina Gutiérrez, said: “We always enjoy qualifying but this was a new kind of way to race from last season so it was difficult to know how it would be, but we finished well and we’re feeling good about tomorrow. The other teams were strong today so it will be interesting to see what happens when the track is dry and there is more dust. I think it will be a challenge but I’m excited to race!”

Sébastien Loeb, said: “Today was a good day. We knew it would be difficult, but luckily we found a good line and we both drove well, so I am very happy. It could be a totally different terrain tomorrow with a lot of dust so the starting position will be important, but we are feeling confident.”

In the first of the new five-car Heats in Qualifying 2, Loeb and ACCIONA | Sainz XE Team’s Carlos Sainz Snr. delivered the strongest starts with Nasser Al-Attiyah running third ahead of Sara Price, all taking very different racing lines up the hill. Veloce Racing watched on from the paddock following Christine GZ’s crash in Qualifying 1.

As the front three pulled away, the ABT Cupra XE car passed Sainz Snr. on the inside, but Al-Attiyah’s pace caused him to miss the flag and, in recovering, he collided with the Spaniard. Sainz Snr. brought the damaged ODYSSEY 21 back to the Switch Zone before retiring from the Heat.

After the Stewards reviewed the collision, ABT CUPRA XE were classified last of the four runners in Heat 1, with the team relegated to ninth overall, meaning they will compete in tomorrow’s Crazy Race.

Following the Switch Zone, Chip Ganassi Racing’s Kyle LeDuc was on the charge and quickly passed Jutta Kleinschmidt’s ABT CUPRA XE car, who was struggling with the handling of her ODYSSEY 21 following the earlier contact between Al-Attiyah and Sainz Sr. LeDuc settled for second behind Gutiérrez, to ensure Chip Ganassi Racing finished third overall in Qualifying and will go into Semi-Final 2 tomorrow.

Following ABT CUPRA XE’s penalty, ACCIONA | Sainz XE Team were promoted up to sixth place overall and a coveted spot in Semi-Final 2.

ABT Cupra XE will battle it out with Veloce Racing in tomorrow’s Crazy Race for a place in the Final. Veloce Racing’s reserve driver Hedda Hosås will contest the rest of the Desert X Prix for the British team after Christine GZ left hospital with a confirmed fractured foot following her crash in Q1.

Needing a win in their Heat to stay ahead of X44, RXR had a shaky start off the line in Heat 2. Mikaela Åhlin-Kottulinsky dropped into third behind the Genysys Andretti United Extreme E and McLaren XE cars and was soon passed by Oli Bennett in the XITE Energy Racing car.

A masterclass in late braking saw McLaren XE’s Tanner Foust enter the Switch Zone right behind Timmy Hansen, as Åhlin-Kottulinsky passed Bennett on the way in – something the RXR team would be penalised for come the end of the Heat.

Disaster struck for Emma Gilmour in the McLaren XE, though, as she was unable to set off from the Switch Zone. By the time the technical error was fixed all other teams were out on course, with RXR’s Kristoffersson chasing down Munnings up front.

It took until the final turn of the race for Kristoffersson to close the 12-second gap, passing Munnings on the final descent to the finish line to take first place before a costly penalty put RXR relegated down to fourth.

Catie Munnings, Genesys Andretti United Extreme E, said: “It was really nice to have a consistent day. That might have been the first clean Qualifying that we’ve had as a team. That was always the plan. We weren’t necessarily focussed on being the fastest but focussed on not having any issues which we struggled to do last year. So, it was really nice to finish P2 overall and get a taste of the side-by-side racing that we’ll have tomorrow.

“I think it’s going to be pretty intense, and the races are definitely going to be tight so I know we’re heading into a really tough Semi-Final here but we’ll do our best.”

JBXE completed the top three in Heat 2, but will go into tomorrow’s Crazy Race after finishing ninth in Q1 due to damage. XITE Energy Racing were close behind in fourth, which is where they finished in the overall Qualifying, and will compete alongside X44 and RXR in Semi-Final 1.

McLaren XE completed the running order in Heat 2 after suffering an issue in the Switch Zone ensuring they will also go into tomorrow’s Crazy Race after finishing seventh in Qualifying 1.