50 NOT OUT FOR TEAM BMW’S COLIN TURKINGTON 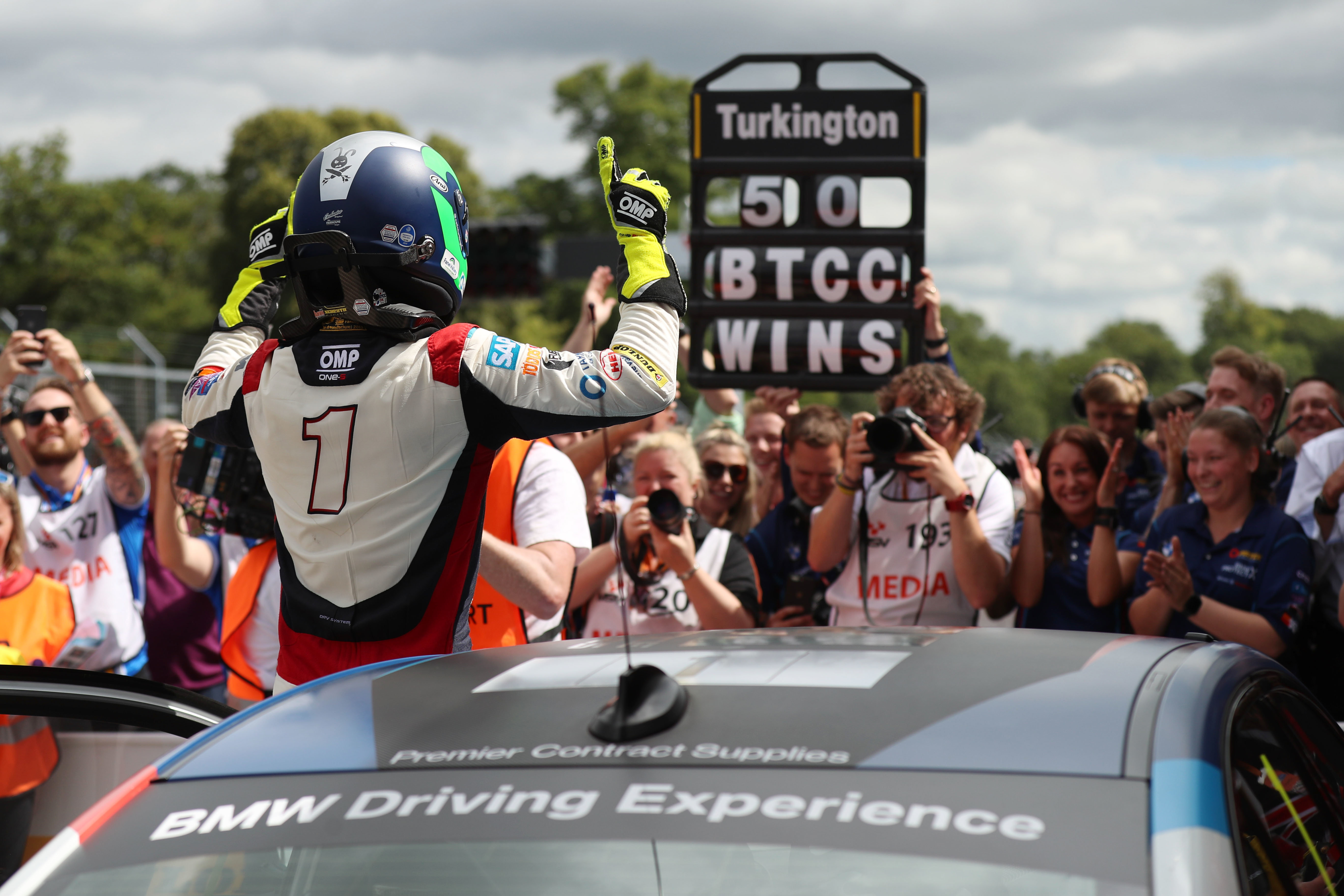 The reigning champion scored two lights-to-flag wins as he further extended his impressive advantage at the top of the current standings.

Team Parker Racing’s Stephen Jelley eventually won the final thrilling race at the picturesque Cheshire venue – his first in the series since Rockingham in 2009 – after on-the-road winner Jake Hill was handed a post-race penalty.

Turkington ran relatively untroubled in the opener to covert pole position into his third victory of the season.

Dan Cammish kept the leader honest throughout, but the Halfords Yuasa Racing man had to settle for second at the finish, while Jordan completed the podium positions.

Triple champion Turkington’s milestone moment came in the second encounter as the Northern Irishman swept to his 50th BTCC victory with another commanding triumph.

The trio of manufacturer-backed BMWs stormed into a 1-2-4 off the line as Jordan relegated Cammish’s Honda down to third, whilst Tom Oliphant also hauled his fast-starting 3 Series into contention.

A couple of safety car periods interrupted proceedings, but the lead positions remained unchanged until the chequered flag as Turkington led home Jordan, Cammish and Oliphant.

Jelley then took his first BTCC victory in ten years after a dramatic finale around the 2.23-mile circuit.

TradePriceCars.com’s Hill led away from pole position, but immediately had to deal with attention from Halfords Yuasa Racing’s Matt Neal.

The main talking point came on lap three when Neal had slid down the inside of Hill across the start/finish line and took the lead. As Neal’s Honda Civic Type R tucked ahead of the Audi S3 into Old Hall, contact was made and the manufacturer Honda car was spun across the track.

A gaggle of oncoming cars tried to find their way through a cloud of smoke and when the air finally cleared it was Hill leading from Cobra Sport AmD AutoAid/RCIB Insurance’s Rory Butcher and Jelley, as Neal tumbled down the order.

Scotsman Butcher pushed hard, and latched his AmD-run Honda onto the back of Hill and there would be one final push for a change in order. Butcher overcooked things into Island Bend and his chance was over, all but confirming Hill’s victory on-the-road.

Celebrations for Hill were then cut short post-race after he was adjudged to have caused the incident involving Neal. Twenty seconds were subsequently added to the Kent driver’s overall race time, which ensured Jelley would take a first ever BTCC win for Team Parker Racing.

With today’s triple-header signalling the midway point of the 2019 BTCC season it is Turkington currently leading the way from Jordan and Cook in the overall standings.

Butcher holds advantages in both the Independent Drivers’ championship and the Jack Sears Trophy.

The BTCC now enters its traditional mid-season summer break before resuming at Snetterton on 3/4 August.

Colin Turkington said: “Qualifying on pole with maximum ballast was way beyond my expectations, and to then convert that into two race wins and cap it off with my 50th career BTCC victory will unquestionably be one of the highlights of my career. I’m really proud about that – it’s a great moment for us all.

“I can only win these races with the support of a team like WSR who consistently give me the equipment to do the job. The 3 Series was clearly the fastest car again all weekend so we can take confidence from that, but now is when the hard work really starts and we need to dig even deeper.”

Stephen Jelley said: “I just saw a load of smoke and thought ‘where do I go?’. It worked out and then it was just head down. Rory (Butcher) was quick and he just overcooked it into that hairpin. I was giving it everything I could to put Jake (Hill) under pressure.

“Well done to everyone at Team Parker Racing. It’s been a long time coming; it’s taken two and a half years to get to this point and I’m sure we can do it on-the-road as well and get another one before the year is out. Thanks to all of our sponsors who have backed us – it is greatly appreciated.”