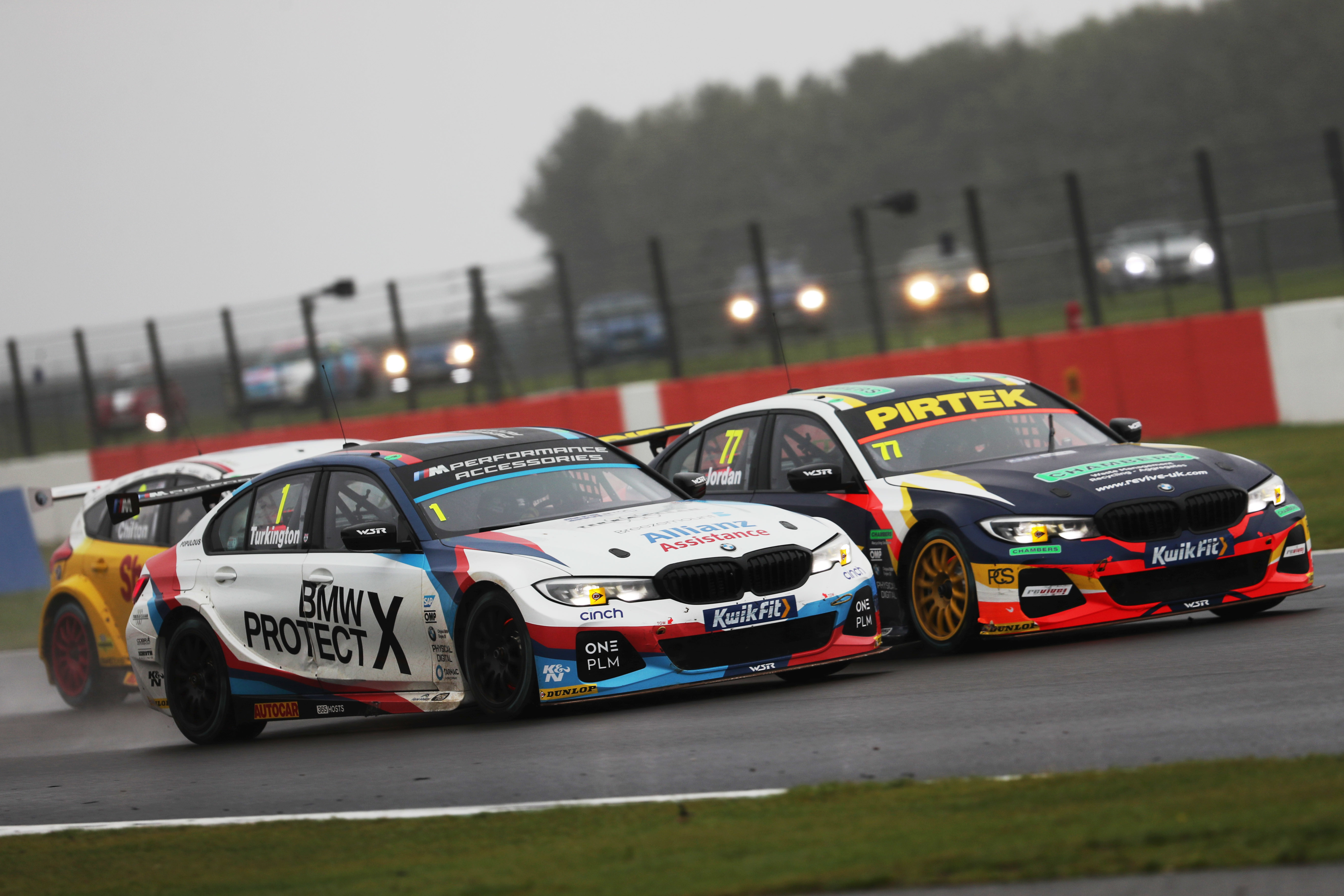 It’s advantage Colin Turkington in the race for the 2019 Kwik Fit British Touring Car Championship after the Team BMW star got the better of his title rivals on a sensational rain-affected day at Silverstone.

A double win for Tom Ingram around the 1.64-mile National Circuit confirmed the Team Toyota GB with Ginsters star as the fifth and final title contender before the series moves to its season finale at Brands Hatch in two weeks’ time.

There was a fantastic underdog story at Silverstone too, as Jack Goff secured the first ever BTCC victory for Kent-based Team HARD.

The day began with Ingram claiming his third and fourth wins for the new-for-2019 Toyota Corolla, as the 26-year-old reignited his championship challenge.

Ingram snatched the lead away from pole-sitter Jason Plato in the opening race, as the Sterling Insurance with Power Maxed Racing driver continues to search for his first win of the season.

The Vauxhall Astra of Plato dominated the early proceedings in greasy conditions, but the Toyota Corolla of Ingram soon had the double champion in his sights.

Plato and Ingram rubbed paintwork on lap four before last year’s championship runner-up got the job done through Luffield to take the win.

Manufacturer-backed Ingram then doubled up, having reclaimed the lead during a dramatic yet shortened Race 2.

Team Toyota GB with Ginsters’ Ingram led from the outset before contact with Plato’s Vauxhall Astra let the BMW of Tom Oliphant nip by both of them and into first.

Mid-race rain left the field running on slick Dunlop tyres in treacherous conditions, and the safety car was soon called for after the Mercedes A-Class of Adam Morgan spiralled into the gravel and out of the race.

Oliphant’s BMW 3 Series twitched wide on the exit of the first corner at the restart and he was soon shuffled down the order, as Ingram swept into an unassailable lead.

Plato was another who fell away late on, but the same couldn’t be said for the charging title contenders of Turkington and Cammish. Team BMW’s Turkington surged from 14th to second, whilst Halfords Yuasa Racing’s Cammish came from 11th to third.

With the rain worsening every lap, a decision was made to red flag the remainder of the contest.

Goff then grabbed the headlines in a dramatic wet/dry finale at the famous Northamptonshire circuit.

The race commenced in dry conditions but was quickly turned into a very damp occasion as drivers had to choose between the gamble of staying on Dunlop Sport Maxx dry tyres or switching to the Dunlop BluResponse wets.

The likes of Cook and Cammish led the way early on and were seemingly strengthening their title credentials, but that all changed when a safety car was called for after the Honda of Matt Simpson spun into retirement.

A number of drivers then chose to switch to wet tyres during the safety car period, and it proved to be a masterstroke as the conditions worsened considerably.

RCIB Insurance with Fox Transport’s Goff and Laser Tools Racing’s Aiden Moffat were the first to surge through the field and it would quickly become a two-way fight for victory. It was either going to be a first for Team HARD or a first ever win for the Infiniti Q50, and the moment of truth came shortly after the duo hit the front.

Moffat, pushing too hard through Copse, slid wide and spun around whilst trying to catch Goff, meaning the latter could comfortably cruise home for victory.

When the rain clouds eventually drifted away at Silverstone it was Turkington who had enjoyed the better of the day in terms of the title contenders; 14th second and seventh place finishes wouldn’t normally represent a particularly outstanding weekend for the three time champion, but his points return on a dramatic day saw him extend his advantage over the chasing pack.

So, the race for one of the most coveted prizes in motor racing will be decided on the final day of the season at Brands Hatch on 12/13 October, where one of Turkington, Cammish, Jordan, Cook or Ingram will be crowned the 2019 Kwik Fit British Touring Car Champion.