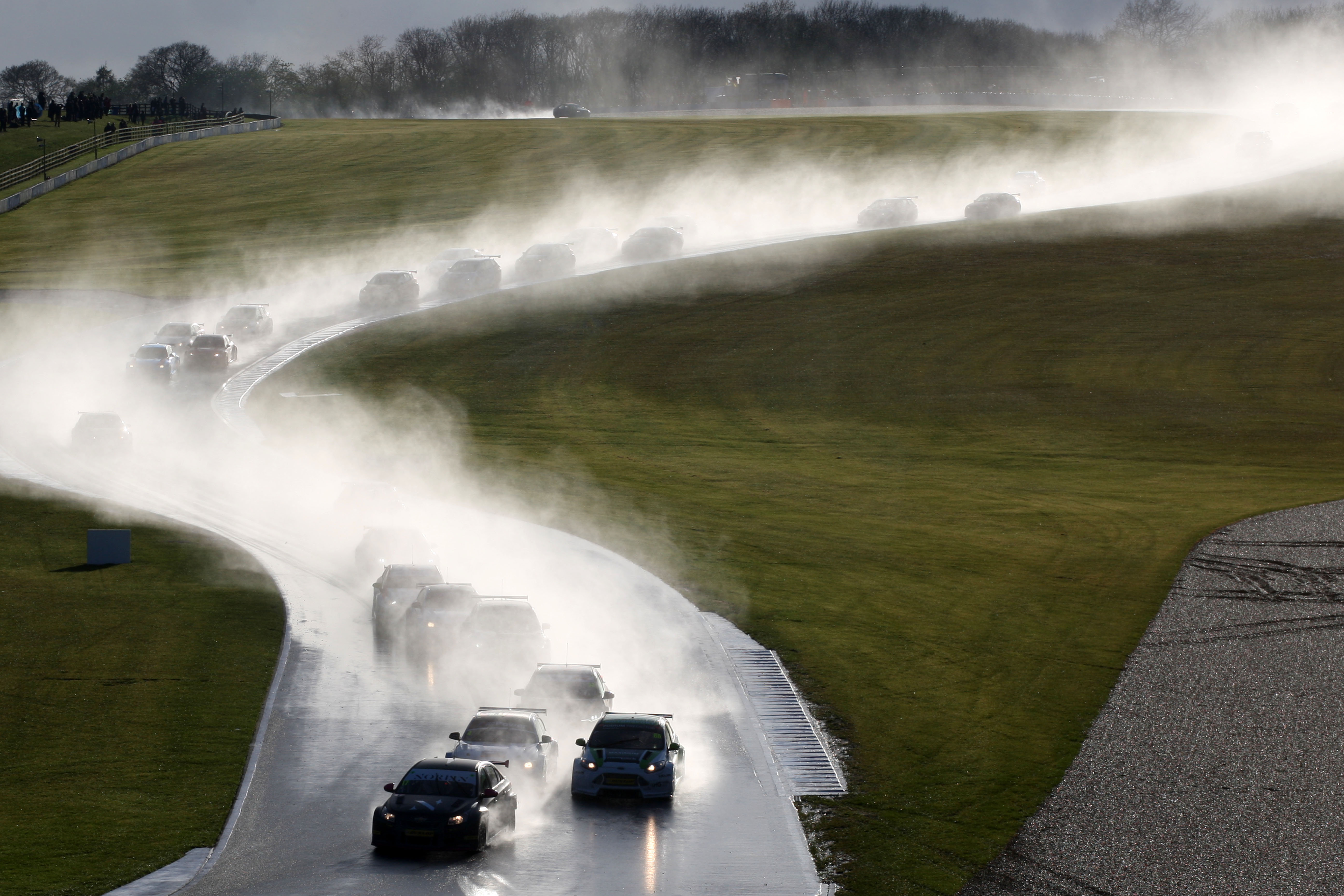 Tom Ingram surged to the top of the overall standings after taking his second victory of the season, whilst Team BMW’s Colin Turkington claimed the honours in the final encounter at the Leicestershire venue.

Moffat produced a magnificent performance in the opener as he stormed through from fourth on the grid.

Scotsman Moffat began hounding down early leader Ingram, who himself had made a forceful move into the lead past pole-sitter Austin on the run down to Redgate for the first time, and the two front-runners were soon locked in battle.

Moffat’s defining moment came on lap five as the Mercedes got the run alongside Ingram’s ballast-laden Avensis, which was also running the harder Dunlop SportMaxx option tyre. Ingram had no answer as Moffat blasted by on the run down through the Craner Curves, and the Laser Tools man would go on to take a comfortable victory.

Ingram was shuffled further down the order once Austin enacted his revenge on the sister Avensis, whilst Halfords Yuasa Racing’s Matt Neal eventually grabbed second after he passed both Toyotas.

Ingram then became the first double winner of the 2017 campaign, claiming a commanding race two triumph.

The Speedworks Motorsport star made his way past the Team BMW duo of Colin Turkington and Rob Collard in the early stages, before he returned the favour on Moffat by making an almost carbon copy move as his younger rival had produced in the earlier encounter.

Collard and Adrian Flux Subaru Racing’s Ashley Sutton eventually progressed to the rostrum positions, but neither could live with the pace shown by race-winner Ingram.

Double champion Turkington claimed the honours in the final race after on-the-road winner Gordon Shedden was excluded from the result for a technical infringement.

Shedden looked to have produced a classy drive amidst difficult conditions as heavy rain fell on the 1.98-mile National Circuit.

Pole-sitter Dave Newsham had initially scampered away whilst those behind squabbled for position. Shedden soon reeled in the BTC Norlin Racing Chevrolet Cruze, having already made moves on the Team Parker with Maximum Motorsport Ford Focus of Josh Cook and Turkington’s BMW.

The reigning champion blitzed around the outside of Newsham at Redgate to take the lead, and subsequently romped home to take the chequered flag. It soon became clear, however, that his Civic Type R had failed its post-race ride height checks, resulting in his exclusion from the final classification.

On reflection, it meant that the move for the win took place on lap eight as Turkington carved his way by Newsham at the final chicane.

Newsham fought valiantly for the remainder of the race as he tried to fend off a gaggle of cars. A pulsating battle saw Sutton’s Subaru nip by the Chevrolet, only for Newsham to claw his way back past on the penultimate tour.

The duo were joined by Adam Morgan’s Mercedes on the final lap, and it was three-abreast on the run down to Roberts. Morgan stunningly emerged ahead of Sutton to take second place, as Newsham narrowly missed out on a podium for the new BTC Norlin squad.

At the end of a dramatic weekend of action it’s Ingram in charge at the top of standings, with second-placed Turkington some 14 points in arrears.

BMW/WSR and its Team BMW squad lead the Manufacturers’ and Teams’ tables respectively, whilst Ingram and Speedworks Motorsport head the Independents’ points.

Rounds 7, 8 and 9 of the 2017 Dunlop MSA British Touring Car Championship will take place at Thruxton in Hampshire on 6/7 May.

Aiden Moffat said: “It’s a very special feeling – I won’t be forgetting this moment anytime soon! The Laser Tools Racing car was absolutely brilliant. We’ve had a great set-up all weekend, so I was feeling confident and knew we had the pace. I might even ask my dad for a day off tomorrow but I doubt that’ll be happening! The guys gave me a brilliant car so it made my job a hell of a lot easier. It felt great out there so I just had to get my head down and drive how I know I can, and it all came together nicely to get that first win. It was great to bounce back after Brands Hatch and be at the sharp end of the field, where we know we can be consistently.”

Tom Ingram said: “I’m lost for words! I knew we would stand a fighting chance but I honestly didn’t expect to win like that, from where we were on the grid and with a little bit of weight on-board. We expected it to be tough to match the pace of the BMWs, but boy, aren’t Speedworks doing a great job at the moment. They’re a proper set of boys and we’ve got one hell of a car! It was all about finding gaps early on, and whenever opportunities arose, I had to take them, put my car in there and hope for the best. Everybody keeps telling me to get points, but that gets a bit boring after a while, doesn’t it, and after sensing a win, I really wanted to try to get through and go for it. It all worked out perfectly.”

Colin Turkington said: “We didn’t do anything spectacular but we did score good points. We weren’t the strongest car this weekend but we just kept it on the road and kept putting good points in the bag. The car was really good in the wet though and at Donington Park, traditionally it’s been tough for us so we’re pleased. The first start, you had to just tiptoe your way around. At the second start, I was struggling initially until the heat got into the front tyres but thereafter the pace was good. It wasn’t easy by any means. The grid is stronger than ever. Everybody is fast so it’s harder to get into the top ten in qualifying. Of course you always want to win or be on the podium but it’s just not always possible, so we’re delighted with our return.”