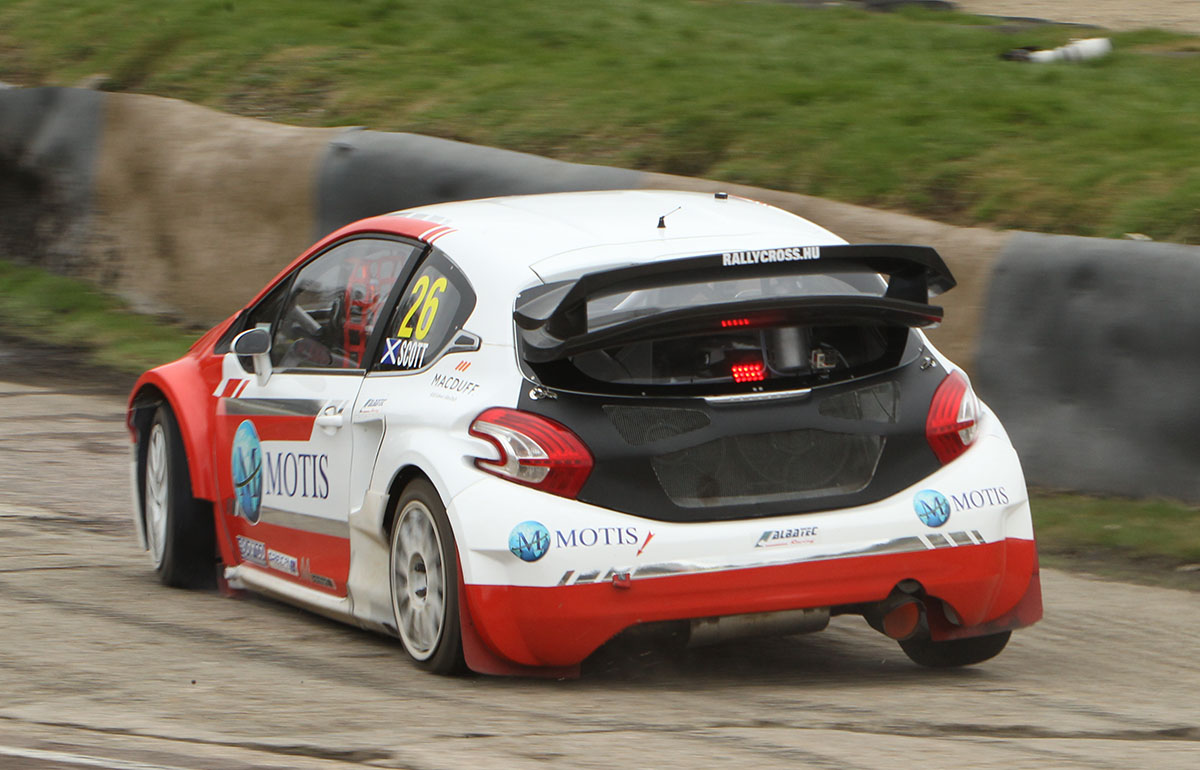 Andy Scott made it two wins from two by claiming the second round of the 2015 MSA British Rallycross Championship in association with the Shannon Group at the traditional Easter Bank Holiday meeting at Lydden Hill (6 April).

Scott has extended his lead in the early standings having also taken victory in the season opener at Croft last month.

Lydden Hill was busy with spectators for the second contest of the campaign, no doubt encouraged by the recent Top Gear Rallycross feature and new found support for the collaboration between BARC and the British Rallycross committee.

In the MSA Supercar class in association with Odyssey batteries, Steve Hill in the Mitsubishi suffered early troubles with terminal engine problems in practice ending his day early. Several drivers also fell foul of missing the joker lap, in the heats, and these included Pat Doran in the Citroën DS3 and Kevin Procter in the Ford Fiesta. Ollie O’Donovan had issues with the launch control in timed practice and it would leave the London based Irishman with a lot to do.

When the final did eventually commence, Godfrey got the best start from pole, holding off Scott for the lead with Andy Grant making a great getaway to hold third. Pat Doran was left at the start in his Citroën DS3 although he did get going eventually, while Harris took his joker straight away running a Citroën DS3, having a better run in the afternoon than he had in the morning.  Kevin Procter had a difficult start as well, in his Ford Fiesta, and was already running down the order and eventually dropped back behind Doran.

The ten-strong car grid had been reduced to just seven cars. Ollie O’Donovan suffered turbo issues on one of the restarts in his Ford Focus and his day was over, while Mark Flaherty sustained damage to the front of the Albatec Racing Peugeot 208 in two restarts and he retired. Flaherty though was not totally disappointed with his day and said,  “Well it wasn’t the end to the day I wanted, but I’m pleased to have got through to the final ahead of some pretty quick drivers. The car was great, the team did a fantastic job, super professional, and I can’t fault them.” Jos Jansen in the Ford did not start the final either after the first restart.

The race then settled into a more traditional format, and over the remaining laps the gaps grew between the cars. Heading into the last lap Godfrey held a sizeable lead over Scott. Godfrey though, lost time going up the hill, a result of damage sustained earlier in the heat at Chessons and Scott nipped past to take a last gasp victory.

Godfrey did enough to hold onto second, while Harris eventually got into third, with Grant taking fourth in his Ford Focus. Fifth went to Steve Mundy in a similar car with Doran sixth and Kevin Procter seventh. Scott said at the finish, “I thought that second overall was the best we would do today, but Julian slowed going up the hill, and I had to try and pass him. It came off thankfully and we are delighted with the win.”

In MSA Supernational, Daniel Rooke kept up his great start to the year by taking an emphatic victory in his Citroën AX from the Peugeot 206 of local man Stuart Emery, the defending champion. Rooke had been the surprise at Croft, but there was no mistaking his win at Lydden. Rooke was fastest in two heats to claim pole, for the final. He led from the start, with Emery initially battling with Gary Simpson in the BMW E30 and Vince Bristow in his BMW 328, while third placed Allan Tapscott got the better of fourth placed Mike Howlin in the Ford Fiesta to push Emery all the way to the flag. Bristow took fifth, both he and Howlin on their first appearance of the year, while sixth went to Paige Bellerby in the Lotus Exige, who made the final courtesy of victory in the B Final.

The MSA Junior Swift was won by Drew Bellerby who battled once again with Bradley Durdin and Jennie Hawkes, the trio providing some good racing all day, through the heats and the finals itself.

In the Swiftsports, it was a podium for locals, with Tristan Ovenden taking a convincing win from Darren Scott, a repeat of the Croft opening round. Completing the Kent rostrum lock out, Deal driver Rob Maynard took third and his first podium of the year. Aidan Hills had been hoping for a good result on his return to the Swiftsport class, but spun off early in the final. Andrew Hawkes held on to take fourth, with Dave Ellis fifth. Fifteen cars had entered the class at Lydden Hill, and the heats in the Swifts were some of the best of the day, ensuring that close racing entertained the sizeable crowd.

In the case of the RX150s, normal service was resumed with Marc Scott taking a very strong win, from Chrissy Plamer with Stephen Jones third. BTCC star Tom Ingram had been going well, but suffered clutch issues during the day. Ingram said, “I really want to come back and do this again, it is a superb form of racing, a bit like karting, but I have to come back, it has been brilliant.”

For Scott it was a pleasing victory following disappointment at Croft last month and he said, “It’s great to be back at the front and suffer no problems, I hardly needed to do a thing to the buggy all day. It’s a completely different animal to the old one, Ollie’s done a great job there. The field is a lot more competitive this year and although it may have looked easy, it certainly wasn’t. I’ve moved up the points a few places I think, so we just need to continue that going into the next round to build on the weekend and get my championship hopes back on track.”

Scott’s Albatec team mate Murray Coulthard had shown well in the heats, and added, “I really enjoyed the experience and would love to have another go, it certainly keeps you on your toes and is a great sport to be involved in. It is pretty much as I expected and although I’m more used to rally stages, I found the nature of rallycross really exciting. I just would have liked to have had more running rather than taking the heavy hit in the first heat.”

Tomasz Weilgosz took the spoils in the HotHatch in his Peugeot 106, with John Lyne back on form, taking second. Jeff Hope-Davies was third with Robert Potyra fourth, all driving Citroën Saxos.

The third round of the 2015 MSA British Rallycross Championship in association with the Shannon Group will take place at Pembrey on 10 May.