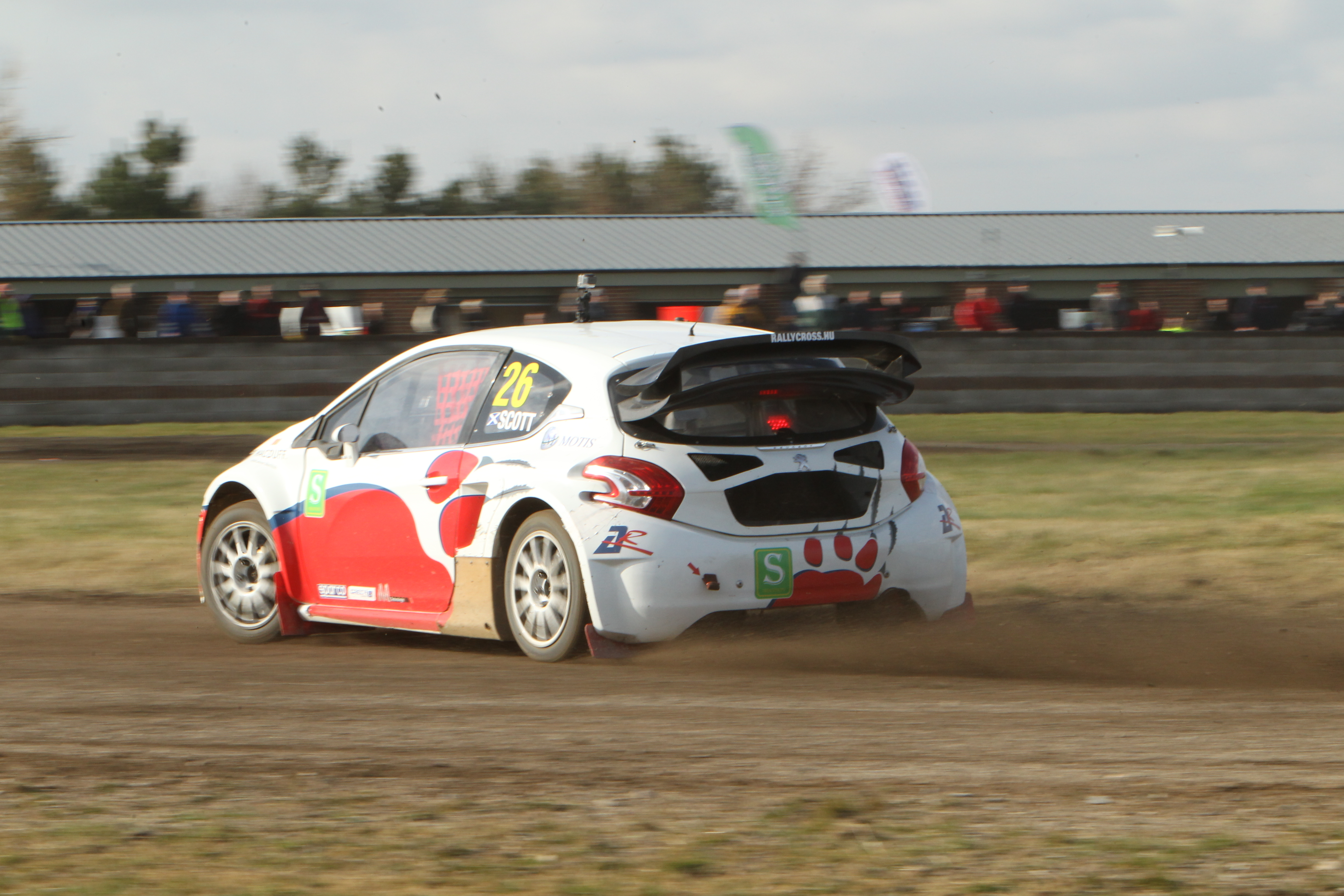 The MSA British Rallycross Championship in association with the Shannon Group began its season with the opening round at Croft Circuit in North Yorkshire on Sunday (March 15).

In one of the best entries seen for many years at a British event, spectators were treated to a superb day’s racing, no doubt partly due to the renewed enthusiasm and rise to prominence of rallycross, as a result of the recent partnership between the BARC and British Rallycross committee.

Scott was on pole for the MSA Supercar final courtesy of two fastest heat times, with Procter and O’Donovan joining him on the front row. O’Donovan was due to debut his new Ford Fiesta, but it was not ready on time so he switched back to the car he used last year.

It had been a surprisingly fraught day for Godfrey, the normally reliable Fiesta breaking a mainshaft in the gearbox in one heat and then suffering electrical issues in another. The resultant problems meant he had to win the Supercar B final to make it onto the grid for the final itself.

Scott led from the start, with O’Donovan getting the better of Procter to move into second place, while others settled into position with Doran temporarily overhauling Procter for third. Midway through the first lap, Procter regained the position and set his sights on O’Donovan, the pair becoming embroiled in a race-long battle that would allow Scott to gradually pull clear and control proceedings from the front.

Godfrey, meanwhile, had set about moving up the field, his car running well, and eventually passed both Grant and Mundy to go on to chase Doran through to the end. Scott held on to win, pursued by a close battle over second – with O’Donovan holding off Procter – and Doran fourth and Godfrey fifth.

At the finish, a delighted Scott said: “What a great way to start the season. The car was great all day; the whole team worked really hard to rebuild a car capable of victory and everything went according to plan.”

Runner up O’Donovan was just as content and said: “I’m very happy with second position. We didn’t have a great start to the day, with turbo and engine problems, and we were down on power all day. We’ve been working hard with the tyres here; we tried four sets and eliminated two of those, and we will have more improvements to come.”

The MSA SuperNationals had assembled a superb entry for Croft, and 2014 British Champion Stuart Emery was back once again in his Peugeot 206. Sadly for him, the first heat beckoned retirement with terminal engine issues. It was a bitter blow so early in the day, never mind the opening round of the championship. That heat was won by Gary Simpson in the BMW M3, and was perhaps a sign of things to come later in the day…

Daniel Rooke took the win in the second heat, making everyone sit up and take notice in his Citroën AX, and then did it again in heat three to clinch pole for the final. Simpson joined him on the middle of the front row, while Tony Lynch (BMW Mini) was on the outside.

Guy Corner (Lotus Exige) from the second row made the best start to briefly head Simpson on the opening lap, from Alan Tapscott (Vauxhall Corsa RWD) with Rooke dropping to fourth. A spin for Corner elevated Simpson into the lead and he held on to take a well-deserved win, from Tapscott in second with Rooke third and Lynch fourth. Corner recovered to finish fifth.

In the Swift Sports, there was a change this year, with Chris Mullen and Graham Rodemark not competing. Both were at Croft though, with Rodemark looking after several cars on the day, while Mullen was in attendance to support old friends. Three heat wins put defending champion Tristan Ovenden on pole for the final, with Darren Scott alongside. Scott has committed to a full season this year, which was good to see for the championship. Rob Maynard completed the front row, the Kent man aiming to gain more experience and push for more podiums.

Ovenden got the better start to lead Scott, but it was Nathan Heathcote that surprised everyone by putting his Swift into third by race end, especially impressive given that he had needed to win the B Final to take his place on the grid. Maynard finished fourth with Jack Brown in fifth. Jake Taylor was sixth, enjoying a steady and productive start to his first year in the Swift Sport class.

In the MSA Junior Swifts, Drew Bellerby took the win from Bradley Durdin, the pair battling all the way to the flag in the final with Jennie Hawkes third. The heats during the day had also seen some good duels between Bellerby and Durdin, which bodes well for the rest of the year.

The RX150 Buggies as ever produced some great heats. Marc Scott was back to defend his crown, but would suffer from gearbox issues. The newer versions of the RX150 with the slightly more powerful engine gave some an advantage, but it was Dave Bellerby that took a very convincing win in the final. He headed home Kevin Feeney in second while Chrissy Palmer took third overall, with Stephen Jones fourth and Larry Sargent fifth. Scott retired on the opening lap with a recurrence of his gearbox troubles.

BMW Minis saw the battle of the brothers Kris and Kiefer Hudson. The duo scrapped throughout the six-lap final, providing great entertainment and finding themselves separated by just half-a-second at the flag. John Clayton finished third.

Craig Lomax took the spoils in the Super 1600 class, his new Citroën C2 working very well on its first outing. The Xtreme team had worked very hard over the winter leading up to Croft and confirmed they were happy with the day’s results.

Hot Hatch victory went to Tomasz Weilgosz (Peugeot 106), but he was pushed all the way by Paul Maybourne in his Citroën Saxo. Maybourne advanced up the grid to keep Wielgosz honest to the end. Stephen Gaunt finished third.

For more information on the BARC visit: www.barc.net

Further details about British Rallycross can be found atwww.rallycrossrx.co.uk