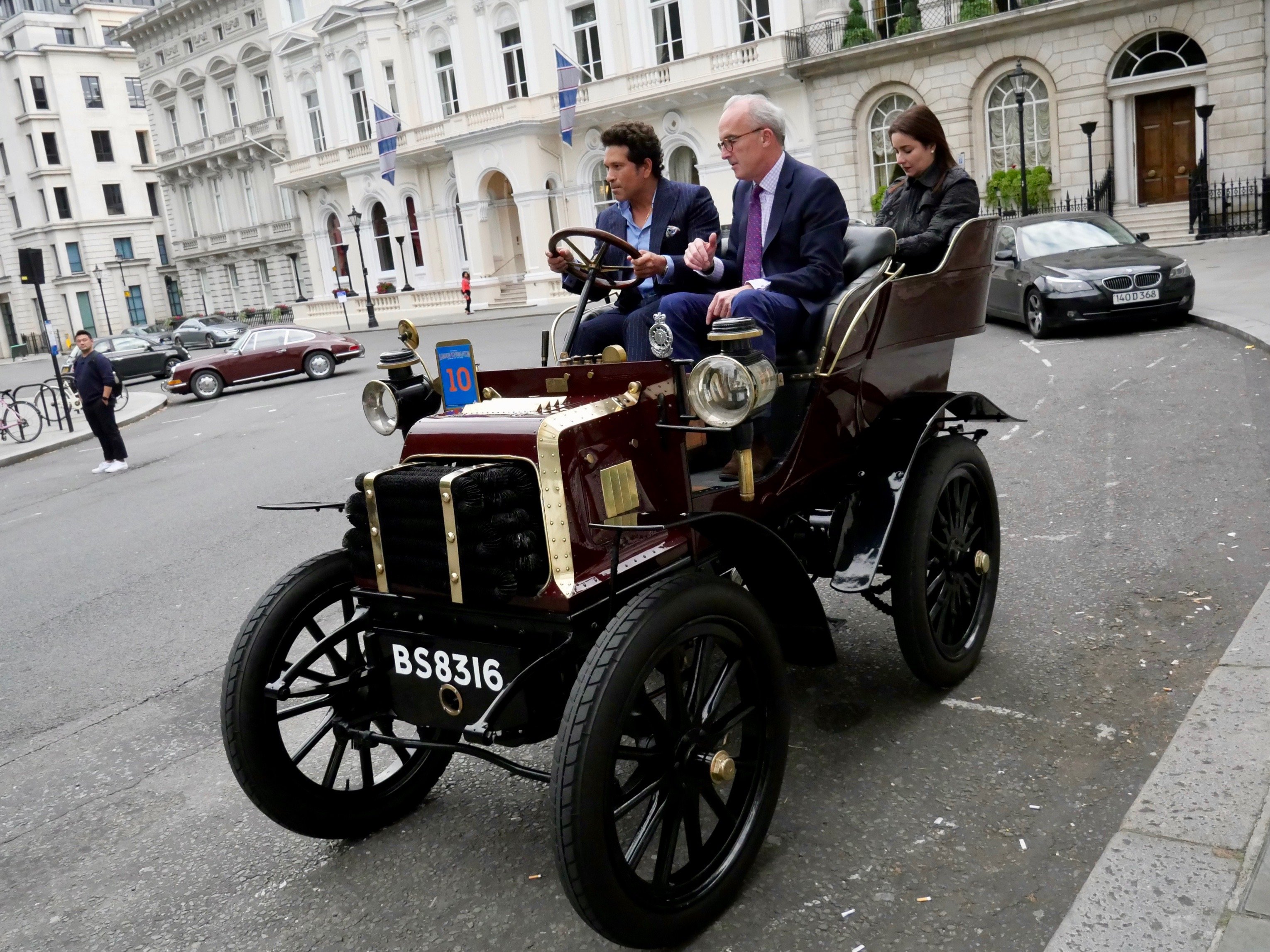 Legendary Indian cricketer Sachin Tendulkar is world famous for his record breaking number of test match runs, but now he has added another historic Run to his impressive list of achievements… last week the renowned ‘master blaster’ took a drive in a 1900 Daimler, a regular participant in the Bonhams London to Brighton Veteran Car Run.

The Daimler is in the care of the Royal Automobile Club, organiser of the annual pilgrimage from capital to coast, and Tendulkar was visiting its Pall Mall Clubhouse while in the UK for the ICC Cricket World Cup.

Aware of his love of cars and always keen to share its passion for historic vehicles, the Club transported a 1900 Daimler (sporting a Veteran Car Run Number 10 – Sachin’s number as a player) from its Woodcote Park Motor House to Pall Mall in time for Sachin’s visit.

The Club’s Head of Motoring, Jeremy Vaughan, showed the cricketer the ropes of the 1900 veteran car as they journeyed down Pall Mall together, before turning into St James’s Square.

Following a brief lesson on the workings of a Victorian car, Tendulkar got behind the wheel to have a go at driving the 119-year old Daimler. The sight of a pioneering veteran car being driven by the world’s top scoring batsman was certainly a sight to behold for pedestrians.

After his ride, Tendulkar was driven back to the clubhouse in the veteran and headed inside to enjoy dinner in the clubhouse.

The Club was thrilled to share the excitement of the veteran car world with the icon, and the cricketing star was similarly overjoyed with his ride in a veteran, describing it as ‘an experience I shall always cherish’.

“He soon got the swing of it and despite being overtaken by a bicycle, which he thought was very amusing, proceeded to circle around the square becoming more confident by the minute,” reported Vaughan. “For an international mega star who has 75 million followers on social media, it was so reassuring to teach someone who was genuinely interested in the experience and had the time to listen and take it all in. I did ask him to join us on the Run… and, who knows, perhaps one day he will accept our invitation.”

As tradition dictates, the Bonhams London to Brighton Veteran Car Run – organised by the Royal Automobile Club since 1930 – will take place on the first Sunday in November, which this year falls on the 3rd November. More than 400 three- and four-wheelers – all built before 1905 – will take part in the 2019 Run and in excess of 500,000 spectators will line the roadsides between London to Brighton.

Full details of the event can be found on the recently refreshed www.veterancarrun.com website.