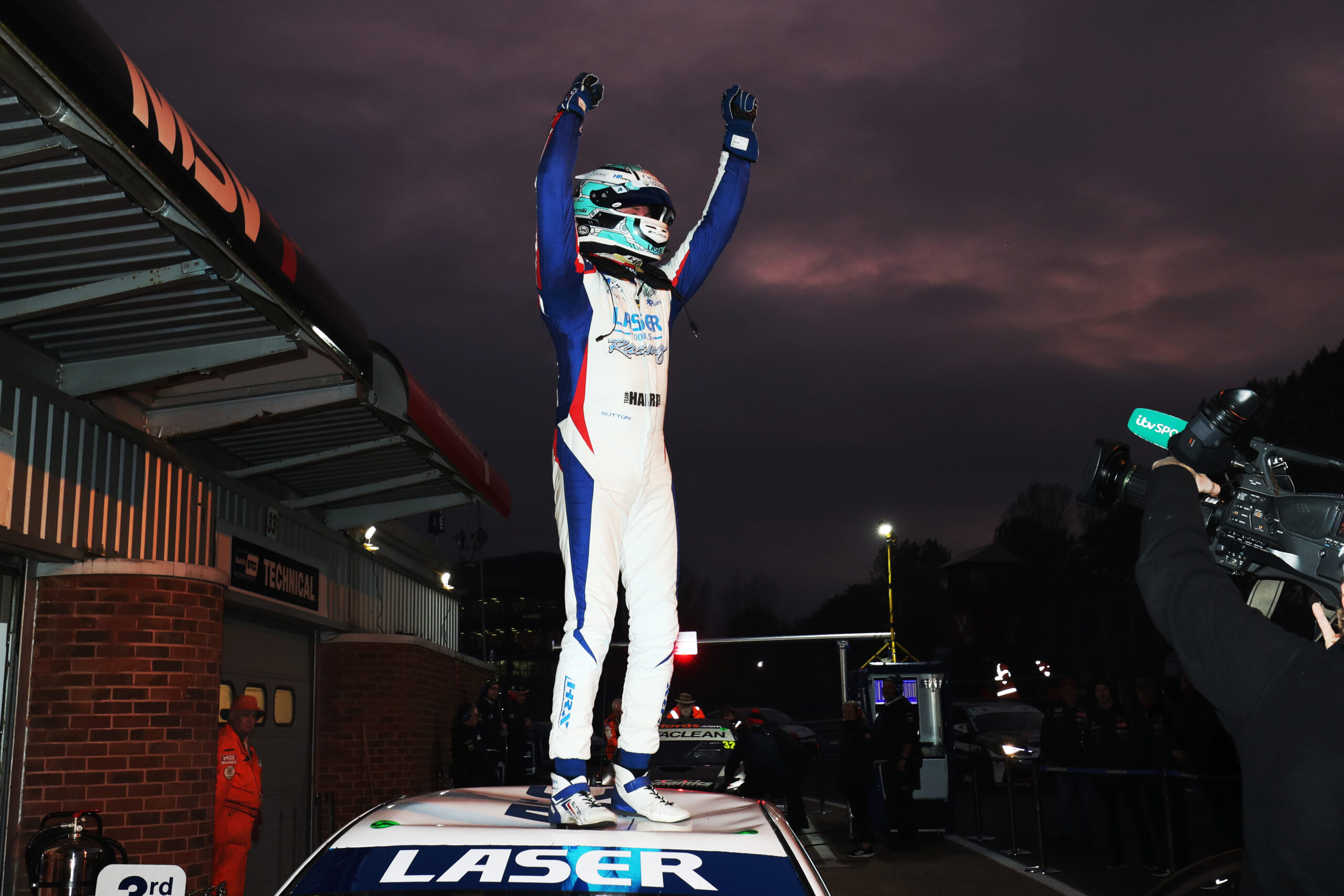 The Laser Tools Racing star has been leading the standings since the second event of the 30-race campaign and has managed the gap back to the chasing pack ever since.

A top six finish in each of the first two contests around the legendary 2.43-mile Grand Prix circuit was enough to move Sutton into an unassailable points lead, and with the pressure now off, the 27-year-old blasted from fourth on the grid to take an impressive victory in the finale.

Sutton’s race-winning triumph was his fifth of the season and his 50th career podium in Britain’s premier motorsport series. It was a largely dominant display throughout the year from Sutton, as the Hertfordshire racer scored a total of 27 top ten finishes and recorded only one non-finish along the way.

Sutton’s title triple moves him to within one of Team BMW’s Colin Turkington, who himself ended the 2021 season as runner-up in the Drivers’ Standings.

The final race podium of the year was completed by Halfords Racing with Cataclean’s Dan Rowbottom – who also claimed the Jack Sears Trophy during a breakthrough season – and Ginsters EXCELR8 with TradePriceCars.com’s Tom Ingram, as he notched up a half century of BTCC rostrums.

BTC Racing’s Josh Cook took a memorable double in the first two races at the famous Kent venue, as he secured third in the overall Drivers’ standings.

Coming into the season finale needing wins and arguably a mathematical miracle, Cook did everything he could by slicing past team-mate Senna Proctor on the run-up to Druids for the first time before comfortably cruising to his fourth win of the season.

He quickly followed that with his fifth victory – a feat only matched by Sutton – as Cook completed a commanding lights-to-flag performance.

Proctor and Halfords Racing with Cataclean’s Gordon Shedden scored a podium in the opener, before the latter repeated the trick in race two alongside Adrian Flux with Power Maxed Racing’s Daniel Lloyd.

The other silverware of significance went to BMW, as the Bavarian marque claimed its sixth successive Manufacturers’/Constructors’ Championship, whilst Sutton and Laser Tools Racing took the Teams’, Independent Drivers’ and Independent Teams’ titles.

The 2022 British Touring Car Championship will once again comprise 30 races across eight iconic UK venues, with the action kicking off at Donington Park on 23/24 April.

Ash Sutton said: “It feels so good and winning the final race was the best way to finish the campaign off. I could finally take the handcuffs off and do what I wanted to do, and it was absolutely amazing. I’ve had a fantastic crew behind me all year, and fantastic sponsors with Laser Tools and to win the Teams’ and Independents’ titles too, it just couldn’t have been any better.

“We had to change the way we approached it. When we looked at the way we attacked it last year, we nearly threw it away multiple times. I had to take it on the chin and learn from it, and I feel like I’ve done that!

“We’re just one step closer to where we want to be. I want to go down as one of the greats in the BTCC and if that means that we’ve got to go after more championships then we’re going to do it. If I beat Colin [Turkington] to five [titles] I’ll be really happy. He’s a tough one to beat but we’ll match his first and then go from there.

“Obviously we’ll put a plan together over the next couple of years and see what we can do. The ultimate goal is getting the most championships.”

Colin Turkington said: “To finish fourth in race two was a good result. We had good pace, quicker than Ash [Sutton] in that one, but it’s sort of been the story of our season: we’ve been there, or thereabouts. But just missed the last bit.

“It was always a long shot coming into the weekend. I was realistic about my expectations. It was always going to take a terrible weekend for Ash [Sutton] and obviously that hasn’t happened in a long time. But we’re the best of the rest!

“It’s a tough championship to win. You’ve got to be realistic, you’ve got to work hard and be dedicated. As a team we’ve worked hard, but it’s a hard one to win every year. I’ve been fortunate four times but I’m still waiting on the fifth.”

Josh Cook said: “Of course, I’m happy! We’ve had one goal in mind all season and that’s the Drivers’ Championship but finishing as high up as we possibly could was the plan coming into the weekend.

“We opened the season with two wins on the first weekend, and have done it again in the final weekend, with a front-row lockout in qualifying too! I’m over the moon for the team. We’ve worked really hard. There have been unfortunate times though the year, but I think that just shows the pace that we’ve got in the car and how well we know it now.

“Ash [Sutton] stole my thunder as always. But this is mega for the team. Obviously congrats to Ash and all the guys at [Laser Tools Racing]. They’ve done a great job and fully deserve it. But for us, it’s great to finish the year like this and I’m mega happy.”

Dan Rowbottom said: “A great way to finish the weekend! It’s our second full year in the championship and we’ve had a good season, ultimately. We’ve won the Jack Sears Trophy, which is great, we’ve won a race, we’ve had podiums, pole positions, fastest laps and a lap record today, it’s not been a bad year!

“Everyone has to prove their worth. The problem in this sport as we all know, is unless you’re given the right kit, you can’t do the job. I’ve worked really hard for it. I’m not going to lie; it has been a ten-year graft.

“Primarily, without Cataclean I wouldn’t be on this grid. So, all my thanks go to them. But the whole team, Halfords Racing with Cataclean, have been fantastic. The synergy we’ve had this year between myself and Gordon [Shedden] and Matt [Neal] has been wonderful.”