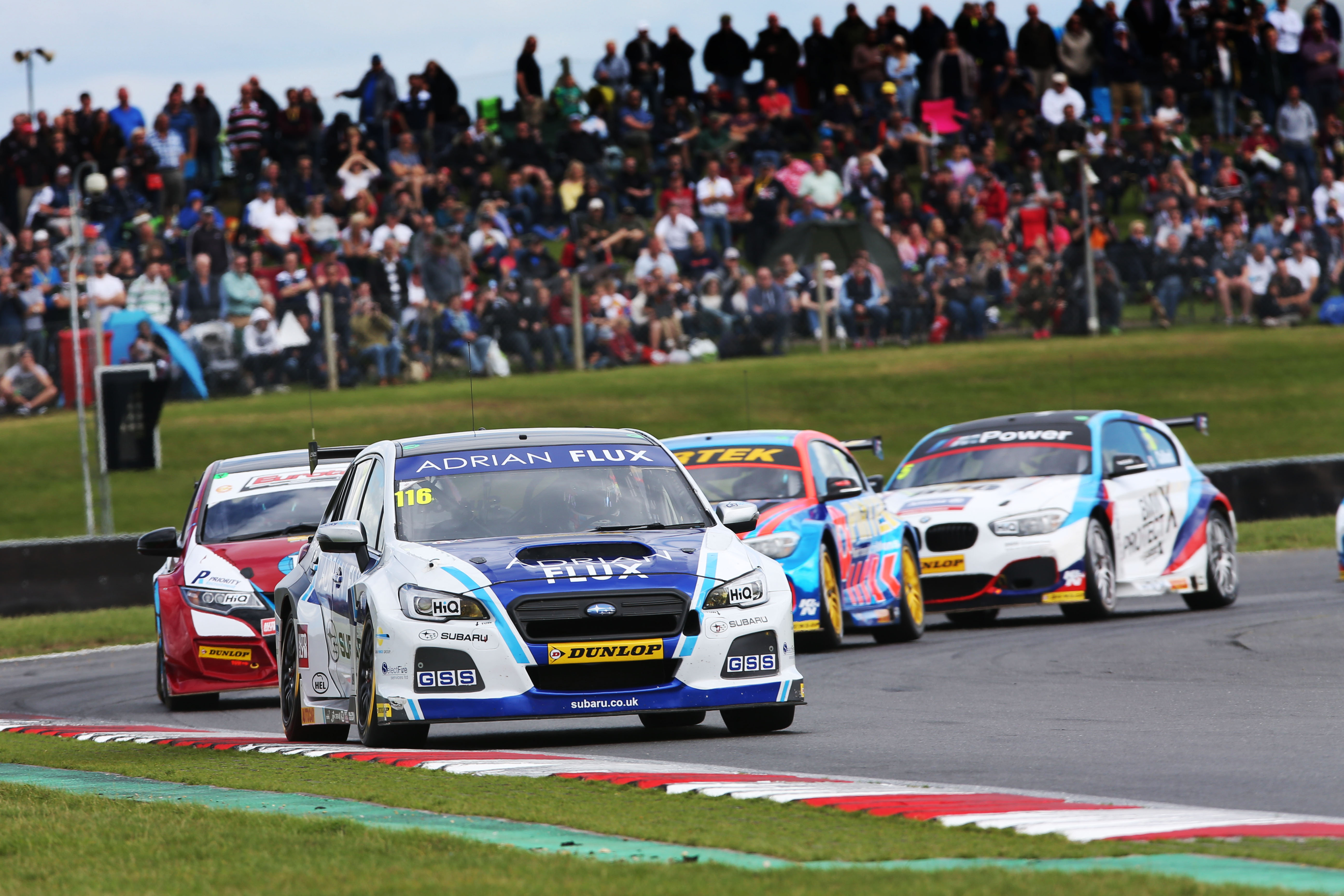 Adrian Flux Subaru Racing star Ash Sutton secured a memorable double BTCC victory at Snetterton on Sunday (30 July), before Gordon Shedden fought back with a victory of his own in the final encounter.

Two imperious drives from Sutton included a fight from third on the grid to win the opener, whilst his second success was a dominant lights-to-flag performance.

The first race commenced with Colin Turkington’s front-row-starting BMW 125i M Sport making its customary quick getaway, and the Northern Irishman was immediately by pole-sitter Jack Goff on the run down to Riches.

An uncharacteristic mistake from Turkington, however, saw him spinning out of race-winning contention, which had seemingly handed Goff his chance to claim victory.

Sutton eyed his opportunity when the pace of Goff’s Honda began to fade late on, and the pair eventually ran side-by-side on the drive down to Oggies corner with only two laps remaining. Sutton completed the move and he went on to take his third win of the season – further building his championship challenging momentum.

Sutton produced another dominant drive in the second bout as he secured a lights-to-flag victory.

The race one winner defended from Goff’s Honda and Jordan’s BMW on the opening lap, but from there it was all Sutton. The Subaru Levorg gradually pulled away from the chasing pack and was more than six seconds clear in the latter stages. The 23-year-old cruised through the final laps to take the chequered flag and with it, the championship lead.

Goff and Jordan couldn’t hang on in their pursuit for a spot on the rostrum, as Team BMW duo, Turkington and Rob Collard , sealed podium finishes following an eye-catching intra-team battle.

Shedden then snatched victory in the finale after long-time leader Jordan endured late heartache when an electrical problem struck his BMW.

The BMW Pirtek Racing driver had taken the lead from pole-sitter James Cole off the line, but soon had to contend with the fellow BMWs of Turkington and Collard, as well as reigning champion Shedden.

When the dust settled behind Jordan, it was Shedden’s Honda Civic Type R in second, after he had swapped positions with Collard’s BMW 125i M Sport.

The hugely experienced trio then kept Jordan honest throughout the contest, but the 2013 champion seemed certain to claim victory and reignite his title challenge. It wasn’t to be, however, as his car slowed without warning on lap 11. Shedden and the other BMWs flew past and a desolate Jordan limped home to finish a cruel and lowly 21st.

In the final two laps it was more of a question as to who would finish second, with Collard and Turkington squabbling in their Bavarian machines allowing Shedden to take the chequered flag in relative comfort. Despite this having been a challenging weekend for the Scotsman, the victory saw him return to the championship summit.

Shedden now leads Turkington by two points in the overall Drivers’ standings with Collard a further two points in arrears. Sutton’s day ended in slight disappointment when a collision forced him out of the final race, but his stellar display overall leaves him just 11 points off the top of the table.

Will Burns won the Jack Sears Trophy at Snetterton, although Senna Proctor maintained his position as the top rookie overall.

The series returns in two weeks’ time (12-13 August) for its annual visit to Scotland at the tight and twisty Knockhill circuit.

Ashley Sutton said: “We’re in a real rhythm at the minute and I’m really enjoying it. The car is phenomenal. We made some changes between races one and two and if anything, we made the car even better! Considering where we were at the end of the opening race weekend back in April I’ll take where we are at this stage! It’s just about being consistent now as it’ll only get harder from here on in.”

Gordon Shedden said: “This just seemed so unlikely after yesterday. We’ve had our dramas this weekend and we’ve just been trying to plug away. It was really unexpected and doubly so with the pressure from the BMWs. It didn’t do me any harm when they started battling each other. The car felt a bit lively at the end there, but it did the job and gave us what we needed this weekend!”

Colin Turkington said: “It’s always a lot more difficult trying to pass your team-mate! Side-by-side through the Esses is probably not advised but as a driver you’re just hungry to get as high up as you can. I didn’t quite have the pace in the car in the final race that I had in the second race but regardless, it was enough to hold station and pick up the pieces from what was happening up front. It’s been a good haul of points and podiums for BMW and it’s been a great weekend for us.”

Rob Collard said: “We’ve made the podium again for the sixth meeting on the trot! We’re pleased to have gone from ninth to third in the second race. We had a misfire with three laps to go, which isn’t ideal when you’re trying to defend, but we got the result we needed. Second in the final race was even better – we’ve done really well all weekend and I’m so pleased for BMW.”