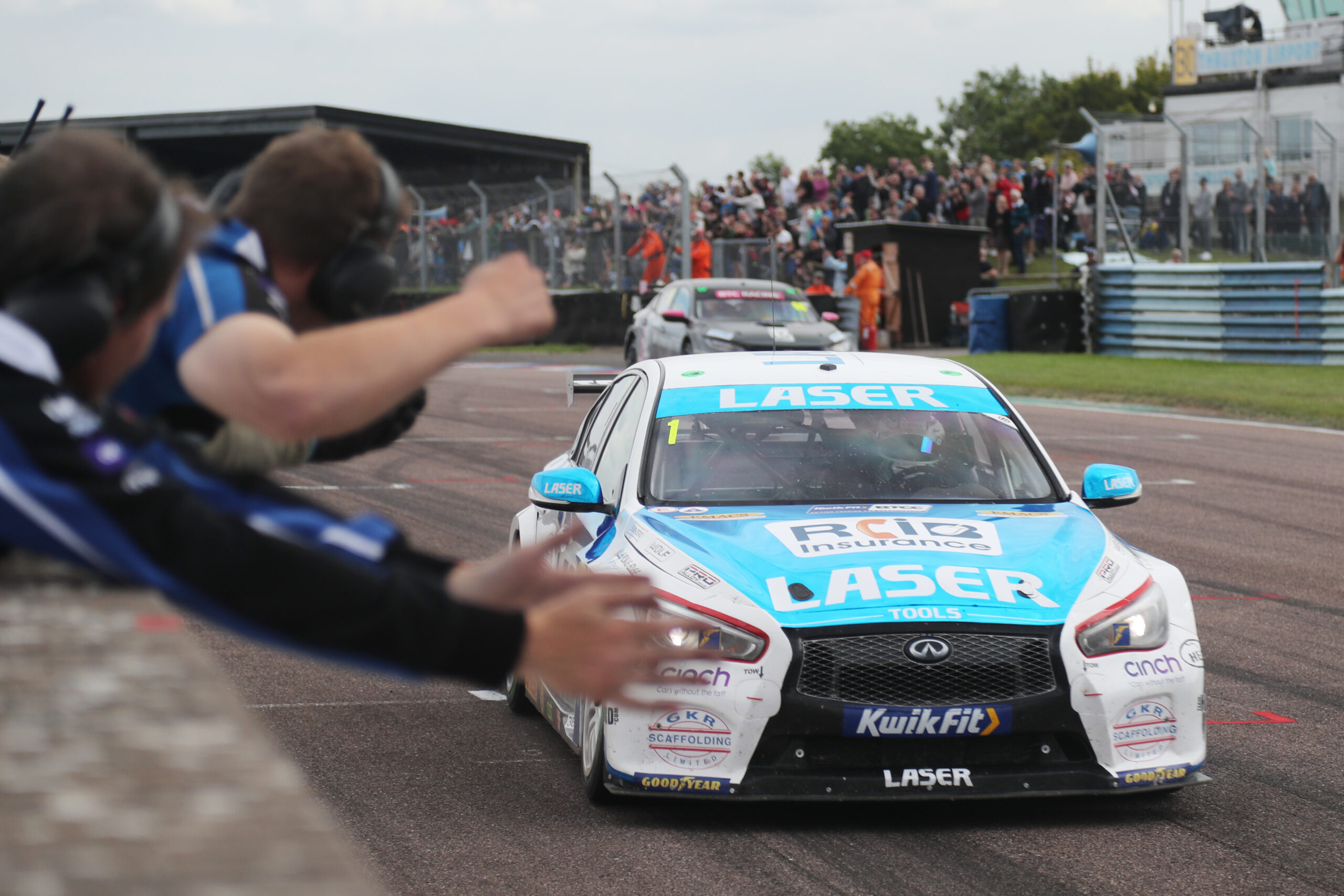 Action aplenty as BTCC wows the crowds in Hampshire

Laser Tools Racing’s Ash Sutton cemented his lead at the top of the Kwik Fit British Touring Car Championship standings after scoring his fourth victory of the season at Thruxton earlier today (29 August).

The early spoils went to the new undisputed king of the Hampshire speedbowl as BTC Racing’s Josh Cook won the opener – his seventh top step success in his previous six visits to the UK’s fastest track.

An incident-packed finale was won by Car Gods with Ciceley Motorsport’s Adam Morgan, rounding off a dramatic day of BTCC action in front of thousands of fans trackside and many, many more watching live on ITV4.

Starting race one from third on the grid, Cook immediately weaved his #66 Honda Civic Type R by Jake Hill’s Ford and pole-sitter Dan Rowbottom’s Honda on the run down to Campbell Corner for the first time.

The move was completed with relative ease and the same can be said for the remainder of the contest, as Cook held off MB Motorsport accelerated by Blue Square’s Hill until the finish.

It was Halfords Racing with Cataclean’s Rowbottom that struggled to maintain his impressive qualifying pace, as he was relegated further down the order early on by Team BMW’s Tom Oliphant and Toyota Gazoo Racing UK’s Rory Butcher.

Sutton scored a smooth and calculated triumph in the second bout as the reigning title-holder picked his way through the field from fifth on the grid.

Having shed much of the success ballast from race one, the #1 Infiniti immediately came alive and by lap four Sutton was relinquishing Oliphant’s BMW 330i M Sport of second place.

Sutton gradually hauled his car towards the escaping Honda of Cook, and the battle for victory was soon on. Cook made his good friend work for the win but, on lap 11 of 16, Sutton squeezed by as the duo approached turn one.

Oliphant continued his impressive day by securing a podium double, as he held off the #24 Ford Focus of Hill.

Three safety car periods and a wild ride through the final chicane couldn’t prevent pole-sitter Morgan from winning a thrilling finale, as the Car Gods with Ciceley Motorsport man led from start-to-finish.

Morgan fended off the hard-charging Team BMW car of Colin Turkington throughout the race, and with both drivers having been selected by the German marque to score Manufacturer points during the weekend, it was a firm but fair fight until the finish.

Morgan’s main fright came with three laps remaining when the Ciceley star outbraked himself through the final chicane, enforcing an off-track run, but the #33 machine returned unscathed and with his lead intact.

As the sun set on an enthralling and entertaining weekend it’s Sutton now holding a 30-point advantage in the Drivers’ standings over Ginsters EXCELR8 with TradePriceCars.com’s Tom Ingram, followed by Cook, Hill and Turkington.

BMW extended its lead in the Manufacturers’/Constructors’ entries, whilst BTC Racing and Laser Tools Racing are joint top in the Teams’ order.

Sutton and Laser Tools Racing continue to command the Independents’ honours, whilst Turkington remains the highest points scorer in the battle for the Goodyear Wingfoot Award.

Rowbottom still tops the Jack Sears Trophy but there was a first-ever win in the category today for EXCELR8 with TradePriceCars.com’s Jack Butel.

Josh Cook said: “Race one was good and pleasing to take the lead pretty much off the start. Jake [Hill] was really quick behind – I knew I couldn’t take my foot off the gas really. I’m just mega pleased for the team really. We had a hard Knockhill, so it was good to come here, get P3 in qualifying and then convert that into the win: just what we wanted!

“We didn’t quite have the pace to stick with Ash [Sutton] in race two. But I’m pleased for the team to come away with P1 in the first race and P2 in the second. It was tough, like someone had hooked a trailer up with a load of weight in it. It wasn’t easy coming off the slow-speed corners and that was where Ash was just mega. I couldn’t even live with him, but that result was for the team.”

Ash Sutton said: “Obviously, we sat there this morning and put a plan together. Going for a win in race two is always key, Cookie didn’t make it too easy, but I wouldn’t let him have two out of two!

“I’ll be honest with you, [Josh] made it hard at the beginning. We were pushing for fastest lap, but he locked that in. He’s a great racer, if you look back at us at Brands Hatch a couple of years ago, we have a great battle all the time.

“Mega day overall today, picking up another win and extending the championship lead. Buzzing for the rest of the season with some of my favourite circuits coming up.”

Adam Morgan said: “It’s always difficult, for some reason it feels like for me on reverse grid pole they throw everything at us to make things really difficult: three safety cars, and Colin on my tail the whole way round. But we’ve made changes throughout the weekend and the car’s got better and better. We put a bit of weight in the car, and it feels better again.

“Under immense pressure from Colin [Turkington] all race, I’ve been training for this really hard at home on the sim with my engineer Steve and the guys at iZone, and what we’ve just done now is exactly what we’ve practiced. So, I knew I could do it and I felt good, but still made a mistake, so I’m going to get told off when I’m back there next week.”