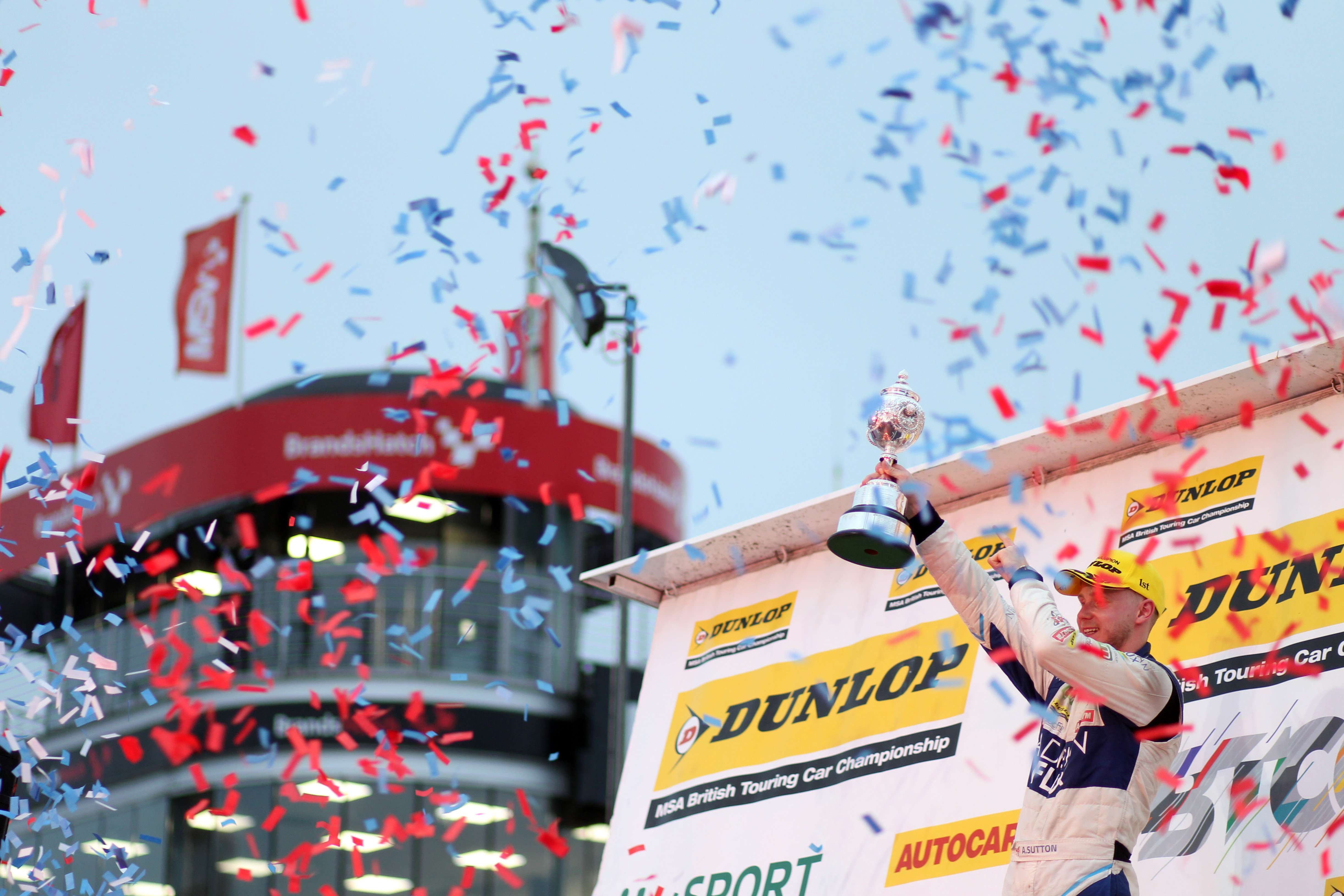 The action had already commenced in tumultuous fashion when pole-sitter Jack Goff spun away his advantage in the opening race amidst greasy conditions.

Having the unenviable task of being the first driver to run on the damp surface through one of motorsport’s most daunting corners – Paddock Hill Bend – Goff lost control of his Eurotech Racing Honda and ended up in the barrier.

Aiden Moffat – the BTCC’s youngest ever driver – went on to produce a mature defensive masterclass to win the race, with Tom Ingram and Sutton finishing second and third respectively.

Race two will live long in the memory as Team BMW’s Turkington kept his title chances alive with a sensational victory.

The double BTCC champion surged from 15th on the grid – making incredible pass after pass – to eventually muscle his way by long-time leader Moffat to clinch an emotional win. Turkington also had to get past title rival Sutton during a quite sublime performance, leaving the title race tantalisingly poised going into the 30th and final round.

A pre-race rain shower ahead of the showdown saw the vast majority of the field switching to Dunlop BluResponse wet tyres on the grid – further adding to the tension – with Turkington and Sutton among those leaving it late to make the change.

Turkington made a clean getaway from tenth on the grid with Sutton following his title rival just behind. The duo made their way through the order in the early running, but disaster struck Team BMW’s Turkington just as he looked to have broken away from his main competitor.

Ingram’s Toyota touched the Ford of Mat Jackson through Graham Hill Bend on lap two, forcing the latter wide on the exit of the turn. As Jackson’s Team Shredded Wheat Racing with Duo car returned to the track there was unfortunate contact made with the oncoming 1-Series of Turkington.

It was immediately clear that the rear-right upright on Turkington’s car had broken and his title dream was over. Sutton nipped through into fourth, although his advances were merely academic as Turkington’s inevitable retirement meant the young Subaru star had already secured a fantastic maiden BTCC title, also becoming the youngest champion in the modern era.

The race win went to Handy Motorsport’s Rob Austin – the third of his BTCC career – as he pulled clear of the chasing pack in fine style. As rain continued to descend on the famous Grand Prix circuit and Jack Goff claimed a hard-earned second place, which was just reward for the pace shown by the Eurotech Racing driver over the course of the weekend.

The loudest cheer, however, went to Sutton as he completed the podium positions after a pass by pole-sitter Michael Epps. Sutton’s season statistics of six race wins and a total of 14 podiums are testament to the speed and brilliance shown by the 23-year-old, and the huge crowd rose as one to welcome home the new BTCC champion.

Ingram eventually finished fourth as he took Independent Drivers’ honours, whilst also securing the Independent Teams’ title for his Speedworks Motorsport squad. Furthermore, Ingram claimed third in the overall standings after seeing off the challenge from reigning champion Gordon Shedden.

Whilst facing initial disappointment for missing out on the overall Drivers’ crown there was still huge joy for Team BMW as it took both the Manufacturers’ and Teams’ championships.

With the final curtain falling on another incredible Dunlop MSA British Touring Car Championship, we will be back once again when the 2018 season gets underway here in Kent at Brands Hatch on 7/8 April.

Ashley Sutton (Adrian Flux Subaru Racing – Drivers’ Champion) said: “Nothing can top this, nothing at all. I feel sick inside because of the buzz! I can’t thank everyone enough, Adrian Flux Subaru Racing have done me so proud this year. Whatever Colin (Turkington) was doing, I was just trying to match during the opening laps, so he didn’t get out of sight. There was a coming-together involving Colin (Turkington) and somebody else and I got a radio call with the team saying he was out, and they told me to go and enjoy myself.

“Obviously the first round here back in April wasn’t ideal and we induced the rollercoaster after what happened at Silverstone but the team kept picking me up when I needed them. I’ve always been one to set targets throughout my career so far. Every championship I’ve been a part of, I’ve achieved my target. I did it last year with the Jack Sears Trophy and now to do what we wanted to do this year, it’s an unreal feeling and it’ll take a long time to sink in. Since the end of 2014, Warren (Scott) has been the one that has taken me under his wing and he’s the one who’s given me this opportunity and got me here today. I did that for him.”

Colin Turkington (Team BMW – Drivers’ Runner-up, Manufacturers’ Champions, Teams’ Champions) said: “We gave it everything and we fought to the end. I’m just disappointed for everybody in the team, although it’s still a great achievement to win the Manufacturers’ and Teams’ titles. The guys made the right choice to go on wet tyres and we were making really good progress, but we were just unlucky with the way things unfolded. Mat (Jackson) wouldn’t even have known I was there. It was nobody’s fault – I was just in the wrong place at the wrong time and the cards didn’t fall our way. What can I say? We gave it our best shot.”

Tom Ingram (Speedworks Motorsport – Independent Drivers’ Champion, Independent Teams’ Champions) said: “Absolutely remarkable. What we have achieved this season is huge. We are a little team running out of a chicken shed, but I have never seen so much passion and commitment to get the job done. The pressure was certainly on in race three when Gordon got behind me but there was no way he was going to take that place from me. I know it’s a cliché but this really is what dreams are made of and it has been an incredible year.”

Senna Proctor (Power Maxed Racing – Jack Sears Trophy Champion) said: “We sealed the Jack Sears Trophy which was the goal this year. Power Maxed Racing have done a great job for me and I couldn’t be more pleased with how it’s gone. We had a couple of races that were the ones that got away but I’m buzzing to be back next year after a great season. It doesn’t seem like two minutes ago that we were here testing the Vauxhall Astra for the first time.”

Aiden Moffat (Laser Tools Racing – Brands Hatch race winner) said: “It’s a great way to end the season and a nice belated birthday present. The Laser Tools guys and the Ciceley Motorsport mob gave me a great car – it’s felt brilliant all weekend. After getting that first win at Donington Park, we thought we’d cracked it but it turned out to be a bit of a frustrating mid-season for us. It didn’t amount to anything but to get that win today is a great result.”

Rob Austin (Handy Motorsport – Brands Hatch race winner) said: “I made some silly mistakes in races one and two earlier today. I lost my grandmother at Silverstone and she was my biggest fan – this one was for her. We’re already working hard on the Alfa Romeo for next year, and we’ve got some fantastic partners so we’ll see what we can do. Well done to Ash Sutton for winning the title.”