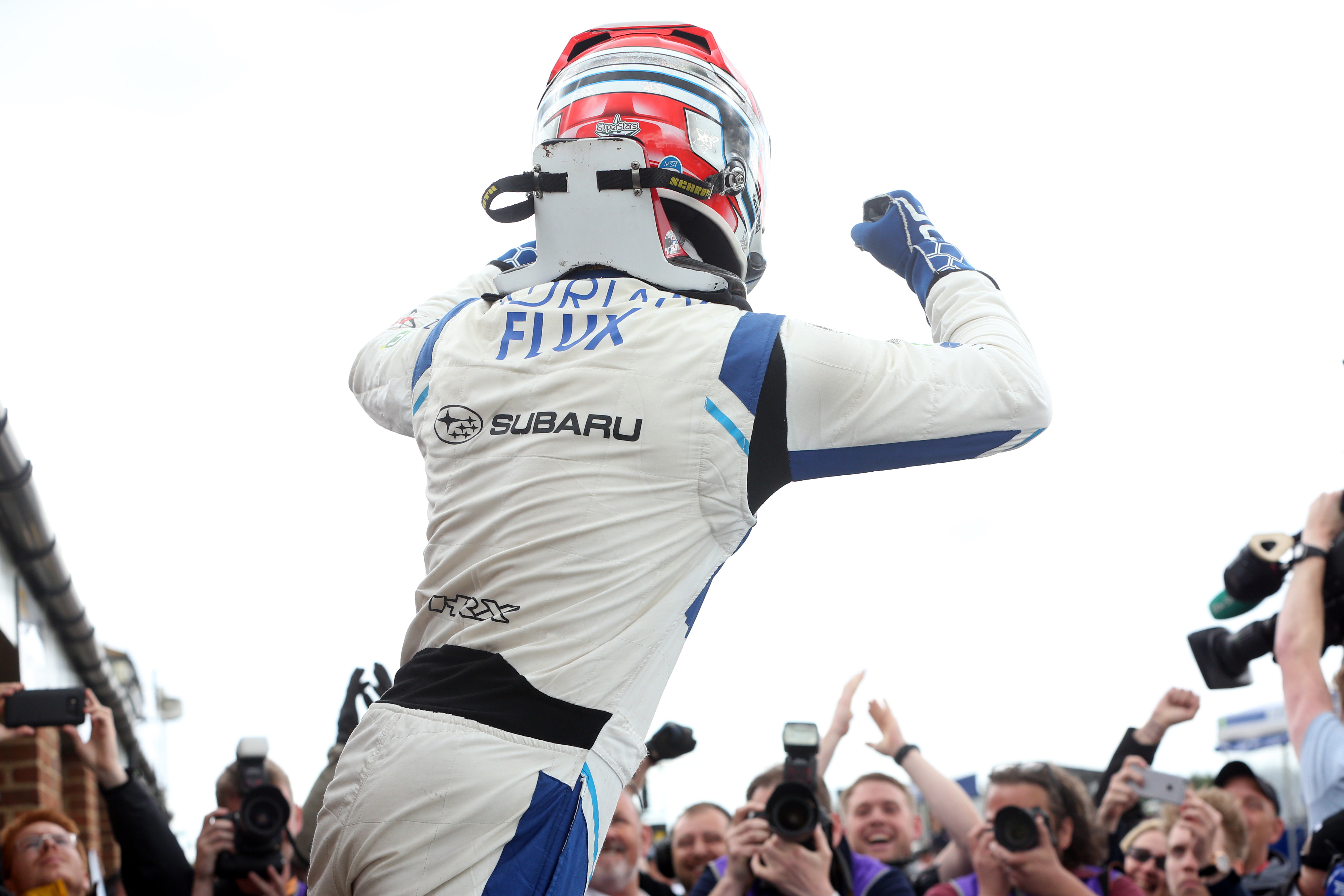 Colin Turkington and Mat Jackson also sealed a victory apiece at the North Yorkshire circuit as the race for the title twisted and turned on a dramatic weekend of action.

The paddock was still feeling the effects of the unfortunate multi-car collision that had marred Saturday’s qualifying session and left three drivers hospitalised.

Once the racing was underway it was talented young gun Sutton making the headlines, as he fended off double champion Turkington to claim the race one honours.

Sutton and Turkington held the top two positions throughout the contest and were rarely separated by more than a few tenths. Team BMW’s Turkington tried several times to get by but his Subaru rival defended valiantly to take his second win of the season.

The final podium position went to Team Shredded Wheat Racing with Duo’s Mat Jackson, ending the popular team’s barren run of 2017. It was also an important Independents’ win for Jackson and the Kent-based squad.

The race for victory in the second round was a role reversal of the opening bout as Turkington this time held off Sutton to seal the spoils.

Turkington made good ground in his BMW 125i M Sport and he was side-by-side for the first part of the opening lap with pole-sitter Sutton. By the time the duo had emerged from the chicane it was Turkington leading with Sutton and Rob Collard behind.

The trio immediately pulled away from the chasing pack before locking into a nip and tuck battle for the remainder of the race. Sutton’s Levorg attacked and defended in equal measure with the BMW and Subaru machines seemingly evenly matched.

Despite persistent jostling for position there would be no changes until the finish, meaning ‘King of Croft’ Turkington and his West Surrey Racing team had shattered a quartet of impressive records.

That result made it 50 wins for BMW with WSR, 75 overall for WSR in the BTCC, a record 12 for Turkington at Croft and a record 17 for WSR at the North Yorkshire circuit.

Team Shredded Wheat Racing with Duo driver Jackson then took his first BTCC race win of the season after seeing off an early effort from pole-man Ollie Jackson and a late challenge from Sutton.

The AmD Audi of Ollie Jackson made a good getaway from P1 and held off the striking yellow Ford Focus in the opening exchanges. The Audi S3 driver then dealt with an early safety car period extremely well, but a dream win would unfortunately fail to materialise.

Mat Jackson slipped his Motorbase-run machine down the inside of the Audi at Sunny on lap three and contact sent Ollie Jackson’s car onto the grass. The latter recovered to re-join in tenth, but it had seemingly left Mat Jackson clear to take a commanding victory.

Nobody had told race one winner Sutton, however, as he scrambled past Subaru team-mate Jason Plato at the final hairpin on lap seven to move into third. He then got a run on the Handy Motorsport Toyota of Rob Austin one lap later and completed a phenomenal move around the outside at Clervaux.

He immediately began reeling in Jackson’s Ford and the pair were right together come the final tour. Sutton eyed his opportunity as they went side-by-side into the final hairpin, but the experienced Jackson squeezed his younger rival on the exit of the turn and went on to claim a memorable win – the 250th for Ford machinery in the BTCC.

The drama wasn’t over as both Austin and Plato locked horns across the line. As the chequered flag waved and the timing screens updated it was Plato who had taken the final podium position by just 0.041s.

BMW heads both Manufacturers’ and Teams’ standings, whilst Tom Ingram’s Independent Drivers’ advantage has been cut to just three points by the impressive Austin.

The BTCC now enters its seven-week mid-season break before blasting back into action at Snetterton at the end of July.

Ashley Sutton said: “I’ll be honest, I didn’t expect a win from that. My focus was to get away cleanly and we did. It was my best start to date – we needed it and it paid off. We hadn’t the grip level that Colin (Turkington) had on the softer tyre but we were strong in the key areas to maintain the gap for the whole race. A win and two podiums, so what more could I want? It has been a fantastic weekend and full credit to the team.”

Colin Turkington said: “It’s great to get another milestone for BMW. Wins aren’t easy to come by so to notch up 50 between WSR and BMW is a huge achievement. I had to work hard for it and the race was won off the start. He got a cracking launch and I was under pressure for the whole race. No wins are easy to come by but this was a particularly tough one. We went up to the chicane side-by-side so I had to take avoiding action. My heart rate was already at 180, trying to defend early on so the hard work was done.”

Mat Jackson said: “That was a massive win for the team, it’s just great. The car’s been quick all weekend and I’m very pleased with that – that’s one for Luke (Davenport). I said I was just going to manage the tyres and we just held on when Ash (Sutton) made his charge. He came up quickly, went for the move around the outside and the road runs out there. As a racing driver you’re there to win, so I defended and we got the victory.”