By Emma Illman31st May 2021Uncategorised 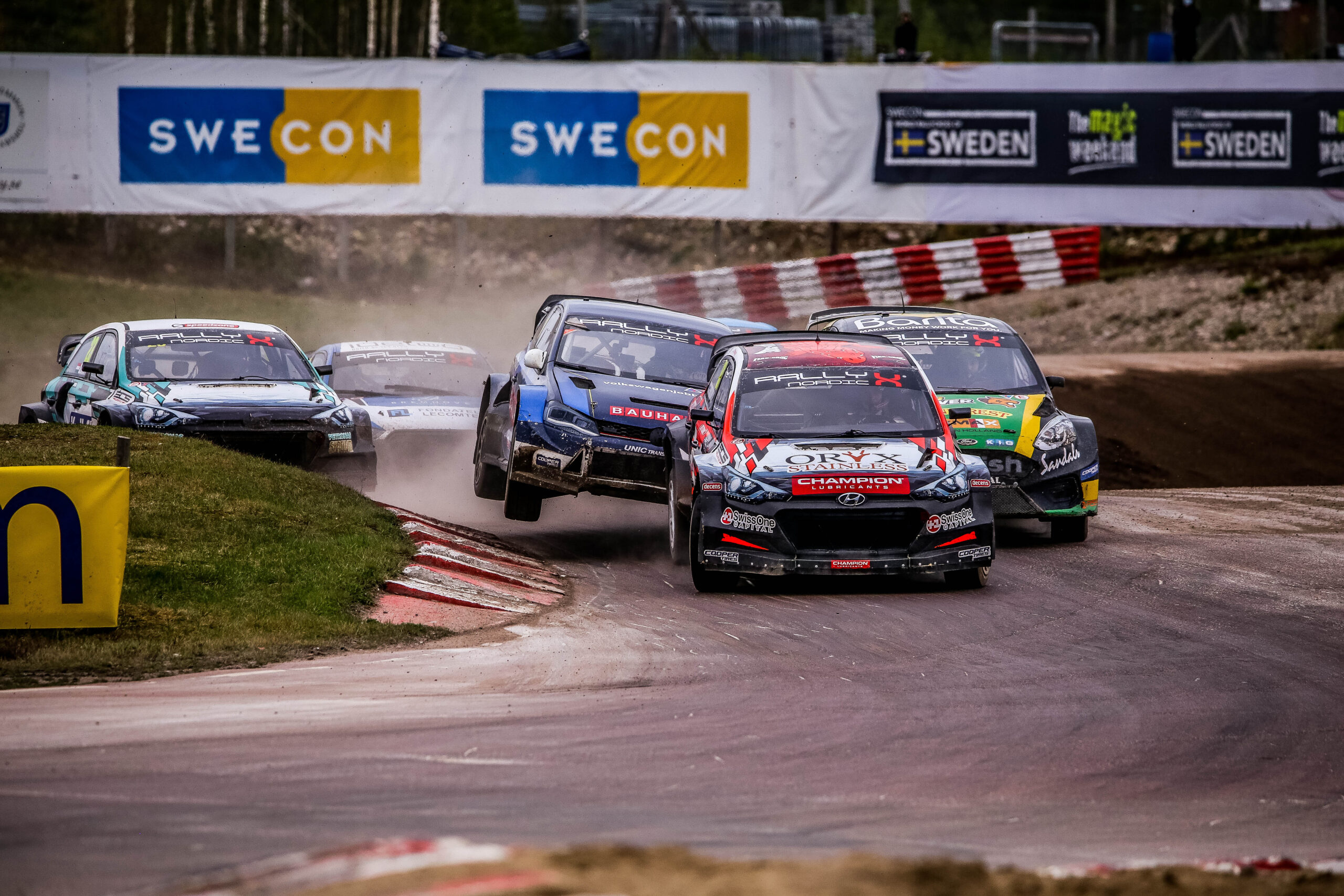 The 2021 RallyX Nordic presented by Cooper Tires season will roar back into life at OuluZone this weekend (5-6 June), with the Finnish double-header set to have a huge impact on the ongoing title fights across all five categories.

Coming off the back of a hugely successful weekend at the iconic Höljes circuit in Sweden, RallyX Nordic now heads to a new venue and once again welcomes a bumper roster of world class drivers and teams for Rounds 5 and 6 of the campaign – which will be broadcast live and free-to-air on RallyX TV.

Johan Kristoffersson currently sits top of the Supercar standings after a victory and two second-place results from the opening four rounds of the RallyX Nordic season, and the three-time FIA World Rallycross champion will be looking to consolidate the top spot when he arrives in Finland.

But the Swedish star is just 13 points ahead of Olsbergs MSE ace Fraser McConnell after the Jamaican backed up his Round 1 win in Denmark with consistent displays at Höljes, while EKS JC’s Sondre Evjen is only four points further back and will be confident of closing the gap.

The top three in the championship fight must also contend with World RX regular Niclas Grönholm, who is back for more RallyX Nordic action after securing consecutive wins on his season debut in Sweden last time out. The Grönholm RX driver is joint-fourth in the standings despite missing the opening double-header at Nysum, and the Finn will hope to get the better of the Supercar stars in his Hyundai i20 when the lights go out in Oulu.

And there is even more top-class talent on show in the form of Juha Rytkönen, with the World RX podium finisher joining the Supercar field on what promises to be a stellar weekend of racing. The Finnish national rallycross champion took a surprise second place on his debut in the premier series at Kouvola last year and is an exciting addition to the headlining RallyX Nordic class.

Tommi Hallman remains the man to beat in Supercar Lites, with the SET Promotion star 14 points clear of the chasing pack ahead of his home race. The Finn is yet to finish outside the podium places this season, demonstrating impressive consistency during his debut campaign in the category.

However, Kristoffersson Motorsport’s Nils Andersson is fired up following his first Supercar Lites win last time out at Höljes and is joint-second in the standings alongside pre-season favourite Linus Östlund.

The pair are 12 points ahead of Simon Olofsson, who has endured more than his fair share of bad luck since a clean sweep in Round 1 at Nysum. The STS RX driver will be hoping his fortunes turn around in Finland as he looks to close the gap to the trio ahead.

The competitive field has been further bolstered by the arrival of RX Academy graduate and esports ace Jonne Ollikainen, who will make his Supercar Lites bow driving alongside Hallman for SET Promotion.

The CrossCar/Crosskart category continues to be a closely-fought affair, with Isak Reiersen top of the standings following his Round 4 win at Höljes. The EKS JC ace holds a slender four-point advantage over Patrik Hallberg while Jimmie Österberg is also in the mix just six points further back – setting up a fantastic showdown in Finland.

The trio have pulled out a clear advantage over the trailing pack. However, the entry list is stacked with talent and features the likes of Round 3 winner Isac Egonsson and Latvian speedster Reinis Nitišs among a host of other prospective challengers.

Simon Tiger continues to lead the Open 2WD class following consecutive victories at Höljes but the Swede was made to work hard by an impressive Mathias Jansson and another close battle should be on the cards in Finland.

Finally, a number of local entries have supplemented the CrossCar Junior category prior to RallyX Nordic’s visit to OuluZone although all eyes will be on Alex Gustafsson and his attempt to reel in runaway points leader leader Lukas Andersson. The reigning champion secured back-to-back wins in Sweden last time out but still has it all to do if he is going to bridge a 12-point gap this weekend.

The high-octane action across all five classes will be broadcast live, free and in high-definition at tv.rallyx.se, with the racing set to get underway on Saturday, 5 June and concluding on Sunday, 6 June.