BIKE LEGENDS OUT IN FORCE AT SILVERSTONE 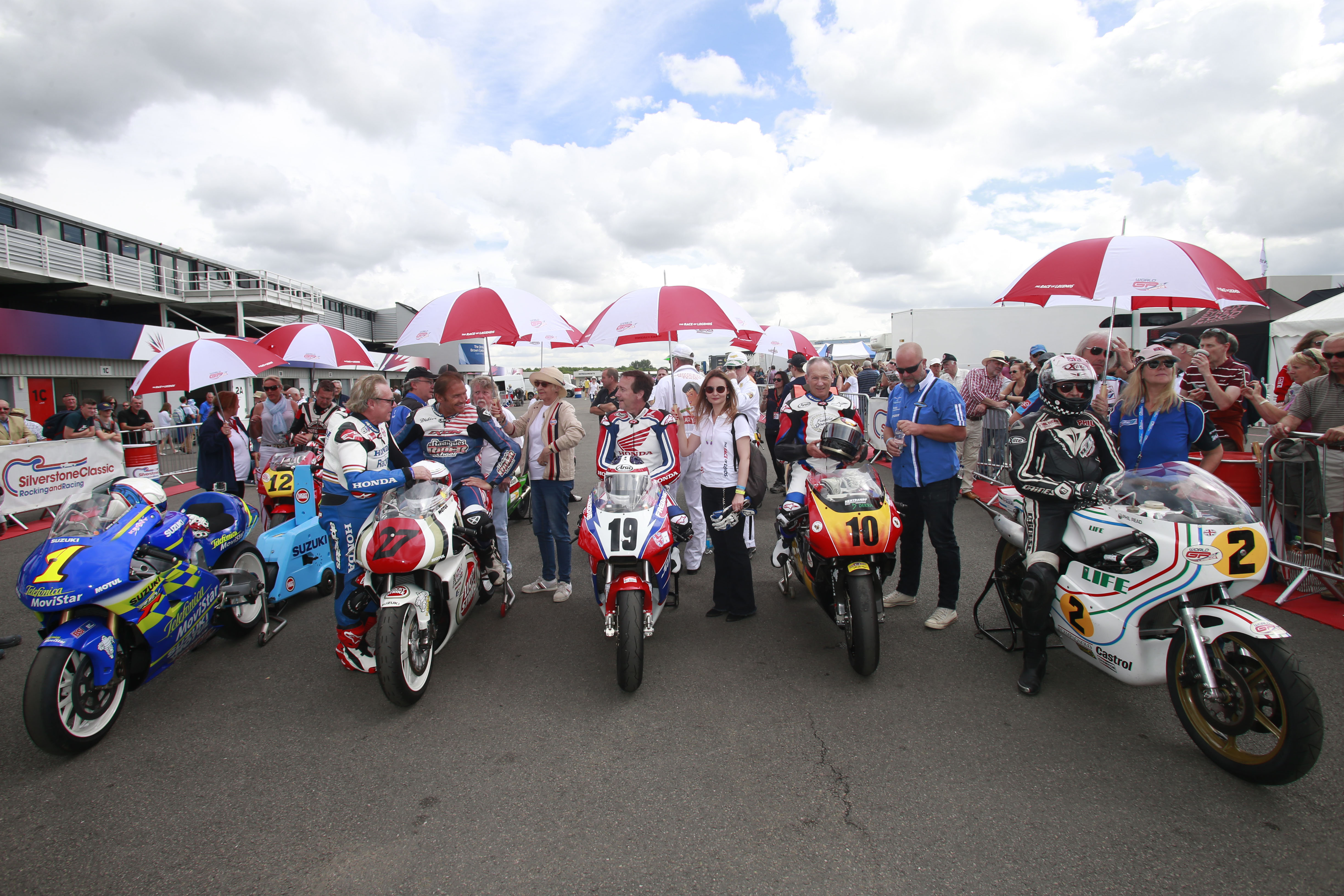 This summer’s Silverstone Classic (20-22 July) will feature its biggest-ever showcase for motorcycle enthusiasts following confirmation that the illustrious World GP Bike Legends are returning with an amazing line-up of top names from the sport’s glory days.

The famous foursome will be sharing memories with fans during a series of meet and greets and will also be wowing crowds on both Saturday and Sunday with dramatic high-speed laps on the full Silverstone Grand Prix circuit.

Together with a number of other notable bike racing legends from yesteryear, the distinguished quartet will be reliving their heydays aboard some fiery 500cc two-strokes – dating back to what many still regard as MotoGP’s most brutal and exciting epoch – as well as new Yamaha YZF-R1s painted in evocative period liveries.

Australian ace Gardner famously lifted the coveted 500cc crown in 1987, four years after ‘Fast’ Freddie Spencer had first won the same 500cc title in 1983. In 1985, the American became the only rider in history to win both 250cc and 500cc World Championships in the same season.

Sarron is another of the standout stars from the same decade, notably when when lifting the 250cc World Championship in 1984. Fuelling the fever, all three savoured British Grand Prix victories at super-fast Silverstone during the eighties.

Read – rightly nicknamed ‘The Prince of Speed’ – has an impressive record from an even earlier era. The much-admired legend from Luton won no fewer than seven World Championships between 1964 and 1974, and was the first rider to bag 125cc, 250cc and 500cc titles.

“We are thrilled to be bringing the World GP Bike Legends show back to the Silverstone Classic in July,” enthused Gardner. “The Classic is an absolutely fabulous festival which always attracts vast crowds, now including an ever-increasing number of very knowledgeable bike fans. We have loved meeting all these enthusiasts and putting on a dramatic track show for them – that’s why we are so excited to be revving up once again this summer.”

Adding to event’s growing appeal to a two-wheeled audience, the legendary Ace Cafe will be celebrating its 80th anniversary at this year’s Classic.

Saluting its mythical status among bikers, the fabled London haven – situated on the capital’s busy North Circular Road close to the bottom of the M1 – will be the focal point for a huge paddock display of retro bikes. Fittingly, 80 of these will be selected for an evocative track parade.

The Ace Cafe also will be ‘taking over’ the circuit’s Pit Stop Café in the Heritage Paddock with menus, displays, dressings and music all embracing the unique appeal and character of the original diner.

Classic bike owners wishing to join the celebrations, can take advantage of a special Ace Cafe Motorcycle Display package which includes two general admission tickets and in-field parking in the dedicated Ace Cafe display area. Those wishing to be part of the revelries are asked either to contact Ace Cafe directly or email experience@silverstoneclassic.com for further details.

Whether two- or four-wheel fanatics – or indeed families looking for a memorable fun-fuelled day out – all visitors wishing to attend this summer’s Silverstone Classic must book in advance.

As has proved so popular in the past, every admission ticket provides free access to both Silverstone racing paddocks, all open trackside grandstands, live music concerts on Friday and Saturday evenings (topped by Soul II Soul and UB40 respectively), air shows, Drive Live test drives, funfair rides and the vast majority of the epic family entertainment on offer. Options for camping and hospitality are also available. Full details of all 2018 ticket prices are detailed on the silverstoneclassic.com website.