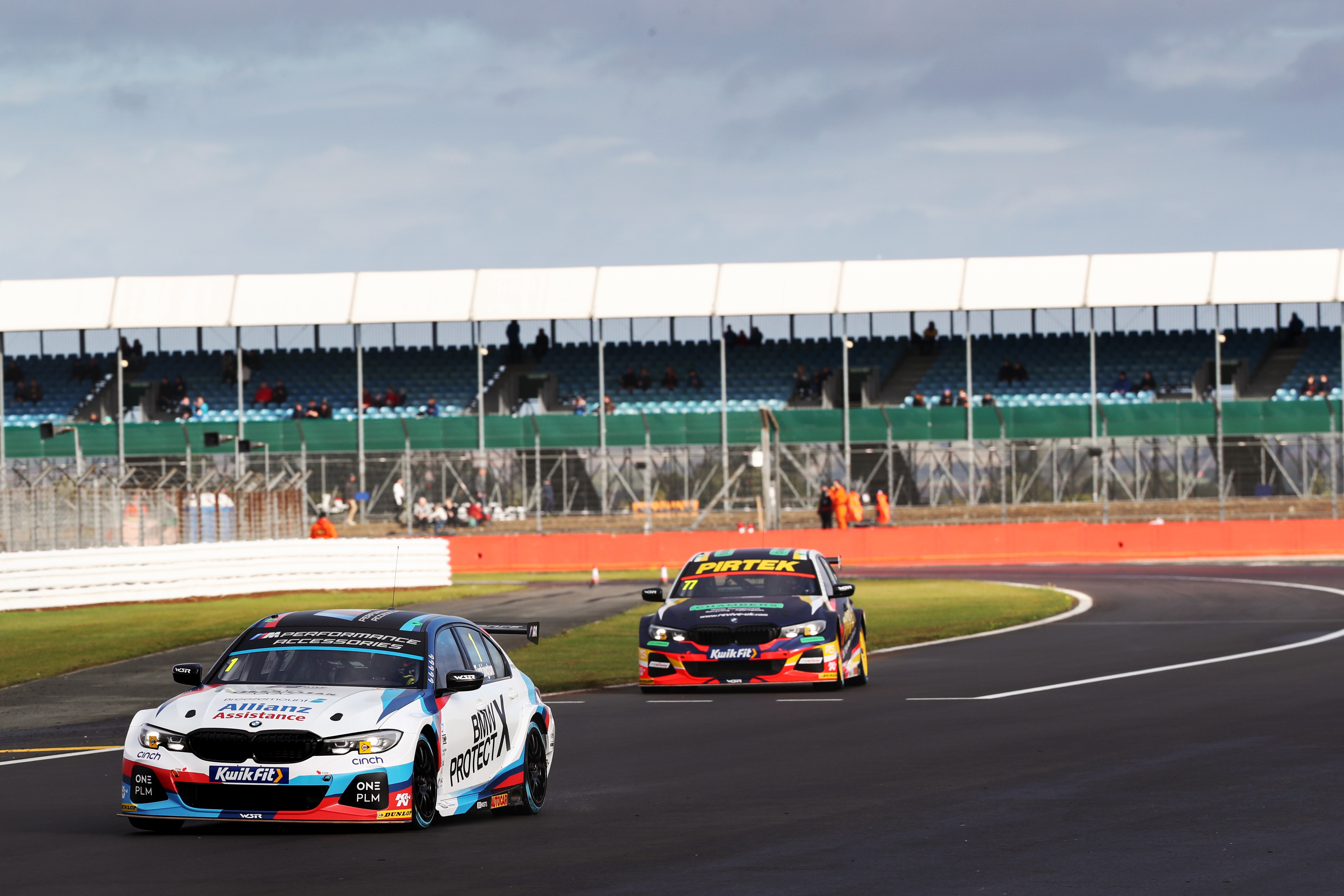 Colin Turkington and Andrew Jordan will go into the 2019 British Touring Car Championship season finale as two of the leading contenders for the most coveted crown in UK motorsport, after surviving the slings and arrows on a dramatic day of racing at Silverstone yesterday (29 September).

With the title battle reaching fever pitch at the ‘Home of British Motor Racing’, qualifying was always going to be a tight and tense affair. Tom Oliphant led the Bavarian charge in fifth position behind the wheel of his BMW 330i M Sport, while Turkington pulled a superb lap out of the bag on maximum success ballast to line up alongside his Team BMW stablemate in sixth. Although he was only two tenths-of-a-second further adrift, that was enough to relegate BMW Pirtek Racing’s Jordan to 14th on the closely-contested, 30-car grid.

Race day was characterised by changeable conditions. Oliphant held position in the opener to take the chequered flag fifth on a greasy track, as Jordan scythed his way through into the top ten. Turkington, meanwhile, found himself tagged into a 360-degree spin that dropped him all the way down the order to 25th, but demonstrating his class, the defending champion produced an excellent recovery to 14th at the chequered flag to salvage two potentially crucial points.

The Northern Irishman was one of the undisputed stars of race two, as he picked his rivals off one-by-one. He had climbed to second – setting an incredible fastest lap along the way, well out of reach of what anybody else could muster – when the action was red-flagged on safety grounds with four laps left to run due to deteriorating conditions as the rain intensified.

On the less favourable medium-compound tyres, Oliphant similarly went on a charge. After making his way up to third, the second-year BTCC driver rapidly latched onto the back of the leading pair and seized the initiative when they made contact on lap ten.

The 29-year-old maintained his advantage in the worsening weather, but a late safety car intervention for a car beached in the gravel would unfortunately prove to be his undoing. At the re-start, Oliphant was the first to test the grip on cooler tyres, and after running wide through Copse Corner, he eventually wound up seventh, one spot ahead of Jordan in eighth.

Further light rain made for a slippery circuit once again in the last race of the day, and all three drivers elected to pit to change over to wet weather rubber during an early safety car period. Rejoining in 18th (Oliphant), 19th (Jordan) and 21st (Turkington) – all more than 40 seconds shy of the lead – they went on to fairly carve their way through the slick-shod runners, with Turkington and Jordan even indulging in an entertaining side-by-side scrap along the way.

Oliphant ultimately crossed the finish line an excellent fourth to cap a very consistent day in distinctly inconsistent conditions, with his trio of results seeing him close to just 11 points adrift of the lead in the chase for the 2019 Jack Sears Trophy. Turkington took the flag seventh with Jordan eighth, meaning the pair head to Brands Hatch in a fortnight’s time sitting first and third in the Drivers’ standings respectively, only 17 points apart as the final showdown speeds into sight.