BOGIE IS THE MAN AT HOME ON SCOTTISH RALLY 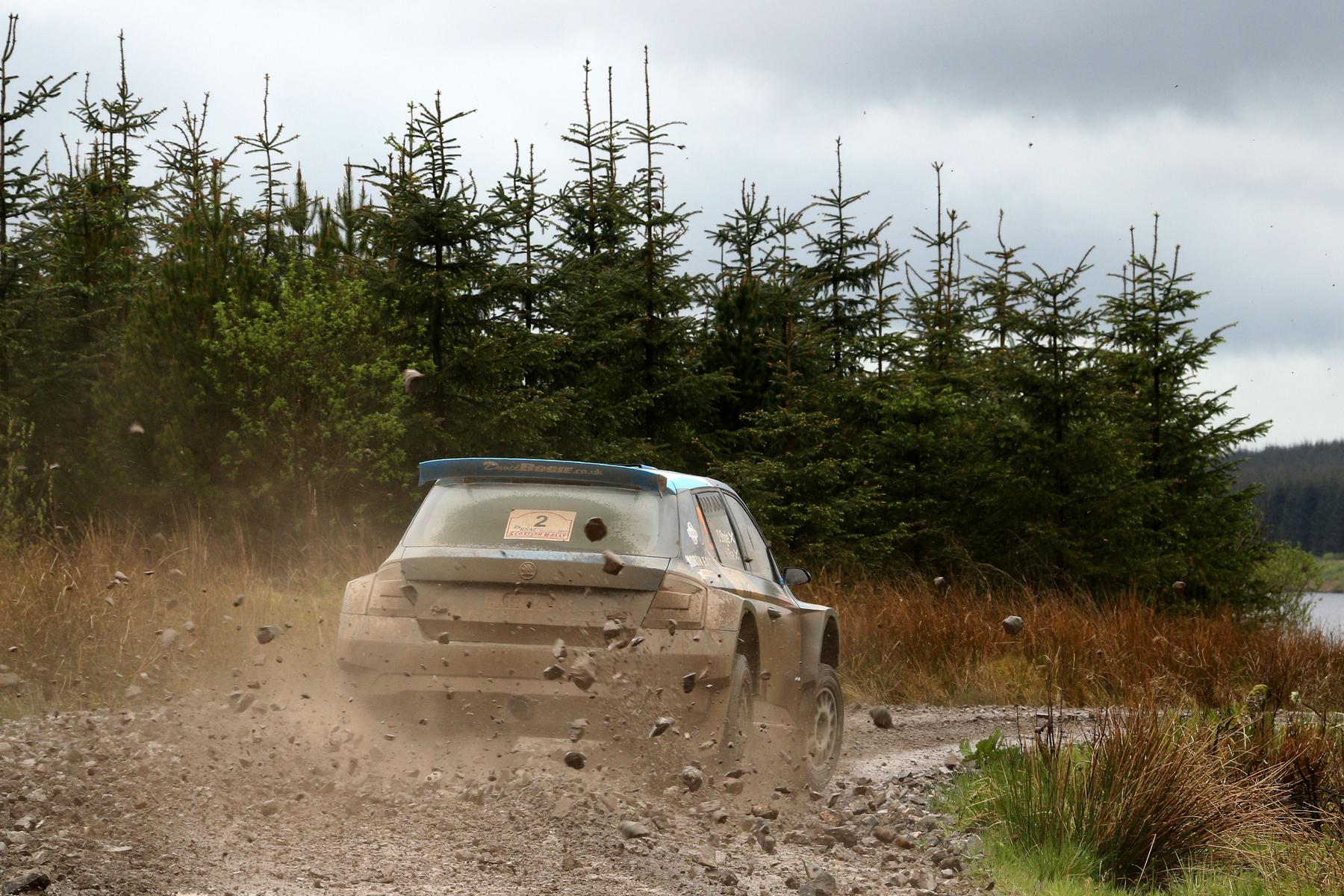 The third round of the Prestone MSA British Rally Championship went right down to the wire on the final stage of the final day, with homegrown hero David Bogie and co-driver Kevin Rae winning the RSAC Scottish Rally (19-20 May).

Bogie and Rae enjoyed a ding-dong battle throughout with the fellow Skoda Fabia R5 crew of Fredrik Ahlin and Torstein Eriksen, until the Scandinavian pairing were forced out of the event with a damaged radiator. Osian Pryce and Dale Furniss in their Ford Fiesta R5 repeated their Pirelli International Rally result in second, while Marty McCormack and David Moynihan took their second top three finish of the year, rounding out the rostrum at the end of a gruelling weekend.

Over 74 rough and tough gravel miles awaited the BRC crews. The opening night was to be a case of survival of the fittest, and flexing his muscles on the two passes of the Mount Joe stage was Tom Cave. The young Welshman and navigator James Morgan were on their second event with the Hyundai i20 R5 and looked comfortable at the overnight halt, with a healthy 9.9-second advantage. Not so lucky were Matt Edwards/Darren Garrod in their Ford Fiesta R5. The Hankook-backed pair set an impressive fourth-quickest time on the opening run before a large rock broke a suspension strut and wheel – putting them out of contention.

It would be another bitter pill to swallow for Cave, who found himself forced out of the lead for the second event in a row, this time with a broken wheel. With the Hyundai unfixable, it was to be an early bath for the initial pace-setter.

With the demise of the Korean machine, a battle royale was set up for the final day, with the fight for the lead becoming a two-horse race between CA1 Sport team-mates Ahlin and Bogie. The former came into the event riding a crest of a wave, having swept to glory on the first two rounds. The latter, on the other hand, had a point to prove. The Dumfries-based driver had shown flashes of brilliance in his DMACK-shod Fabia R5, but the results had not reflected his phenomenal speed. With the bit between his teeth, Bogie wasn’t leaving without a home win.

Descending rain made tyre choice extremely difficult as the two BRC heavyweights battled it out on the gravel stages, trading seconds after every test. Bogie was a man on a mission on the afternoon loop of stages, with the Scottish driver reducing the deficit to 1.4 seconds with two speed tests remaining. A stage later and he had turned the tables, to lead Swedish star Ahlin by 0.1 seconds going into the final 8.11km showdown.

Ahlin’s luck, however, would run out halfway through the stage when a rock made its way into the front of the Skoda, bursting a hole in the radiator. It was game over for the championship leader. Much to the delight of a packed Moffat town centre, Bogie rolled into the finish to a huge round of applause. David had won his first BRC event since his championship-winning year in 2011.

The battle for the podium was a similarly fraught affair. Osian Pryce and Dale Furniss in their Spencer Sport Ford Fiesta R5 battled their way up the order to second to strengthen their championship position, while Marty McCormack and David Moynihan had a spirited run to rise from fifth to third on the final stage in their Kumho-backed Skoda Fabia R5. Multiple BRC champion Keith Cronin in the M-Sport run Fiesta R5 was all set to take his first podium of the year, but a last-minute puncture dropped the Irishman and co-driver Mikie Galvin to fourth, just eight seconds shy of the rostrum positions. Desi Henry and Liam Moyinhan in their Michelin-supported Fabia R5 couldn’t quite repeat their third place from 2016, but were pleased to secure their first points of the year.

The Prestone Motorsport News Junior BRC unfailingly produces action-packed entertainment on the stages, with the stars of tomorrow fighting tooth-and-nail to be at the top of the pecking order. On the previous round, the winning margin was a mere 0.4 seconds and the Scottish Rally was to provide an equally hard-fought contest.

Round one winners Oscar Solberg and Patrik Barth (Ford Fiesta R2T) led after the opening two stages, with the Scandinavian combination excelling on the wet, rough speed tests until turbo woes forced the Pirelli pair into retirement on Saturday afternoon. Stepping into the breach were Cameron Davies and Caron Tomlinson in their Peugeot 208 R2, following an exciting evening scrap with Solberg and Barth.

The Welsh duo had been dogged by mechanical gremlins on the opening two rounds and were eager to put their problems behind them on the Scottish gravel. Setting some impressive times, Davies would stretch out an advantage of nearly one-and-a-half minutes to take his first BRC win in his debut year – making it three different winners from the opening three events.

Fellow Welsh competitors Meirion Evans and Jonathan Jackson were delighted to finish second in a similar 208 R2, netting their best BRC finish to date. Such was the pace of the top two, the Peugeot drivers also scored points in the overall classification. Rounding out the rostrum were Marty Gallagher and Dean O’Sullivan in another Peugeot 208 R2. The Irish crew had never stepped on the podium previously and were thrilled to spray the champagne after a demanding contest.

The Cadet Cup forms an integral part of the BRC, with drivers aged 25 and under using the new formula to cut their teeth on the toughest tests the British Championship has to offer. Coming into the third round, Josh Cornwell and Richard Bliss had a perfect record and the duo completed the hat-trick on the Scottish Rally in their Ford Fiesta R2. The pair didn’t have it all their own way as they were pushed hard by Tom Williams and Bryan Hull in another Fiesta R2. Eighteen-year-old Williams picked up his second podium of the year while Fergus Barlow and Max Freeman put up a good fight in their Fiesta R2 to take third.

In the National Rally Cup, Donnie Macdonald suffered a DNF on the last round but alongside new co-driver Neil Shanks, he grabbed his right-hand-drive Ford Fiesta R5 by the scruff of the neck and threw it through the eight gravel stages. The pair quickly gelled and took a fine eighth overall – spraying the National Rally Cup champagne in Moffat.

Spencer Wilkinson and Glyn Thomas faced a race against time to make the start-line in Dumfries. The Production Cup pairing finished rebuilding their Subaru Impreza the morning of the Scottish Rally after a tough Pirelli International event. The crew enjoys the longer, tougher and demanding challenges the BRC has to offer and brought their car home in 21st overall – and more importantly they have swelled their Production Cup points account.

“This is unbelievable! This is the one I have wanted to win the most. We didn’t get off to the best start on Friday night, but we pushed hard on Saturday to put us in a good position to fight. To go into the final stage with 0.1s between Fredrik and I was all or nothing, and it was disappointing to see him go out. It’s been a tough event – the weather has been changeable and the pace has been unreal, but we kept out of trouble and brought the car home in one piece. It’s really special to win at home in front of my friends and family. In fact, I have booked a table at a local restaurant so we will be celebrating this evening!”

“I am over the moon to get to the end of this rally and finish on the podium. It’s been hard on me, the tyres and the car. As well as punctures, we have had an electrical fire – we are lucky to be at the finish after all of that. I am so chuffed with the result, as it has made the championship very healthy for us. To be consistently on the podium in every rally – you can’t ask for any more to start the year off.”

“We didn’t think this one was coming. We struggled with the set-up to begin with, but we never gave up, we kept pushing and the times started to come to us. There were no real dramas – just a few mistakes on my behalf. I actually had a moment in the same corner where I made a mistake ten years ago – the last time I was here! We had no punctures, which helped our progress and the Kumho tyres really worked well. After the non-finish on round one, to get two podiums is very important for the championship and ticked a box for us as we head to Ypres, a rally I am really looking forward to.”

“This is fantastic, I don’t think it will ever sink in. It’s been a long time waiting for this. Last year we did the Fiesta Trophy in the BTRDA series. We won the prize to get to the BRC and now that we are here, to take the win is worth all the hard work. We had our fair share of drama – we caught cars on stage, nearly had a big, big spin, my co-driver got a bit sick and our lampods weren’t set up right. The win has really helped us in the championship, as another poor result would have put the pressure on too much. We just want to keep this going now!”
Prestone MSA British Rally Championship
Round 3 – RSAC Scottish Rally

(* = Joker nominations have been played. Rally Isle of Man is a double-header with two points-scoring opportunities. Every driver to drop one score.)

The full results and championship points can be found at www.msabrc.com.