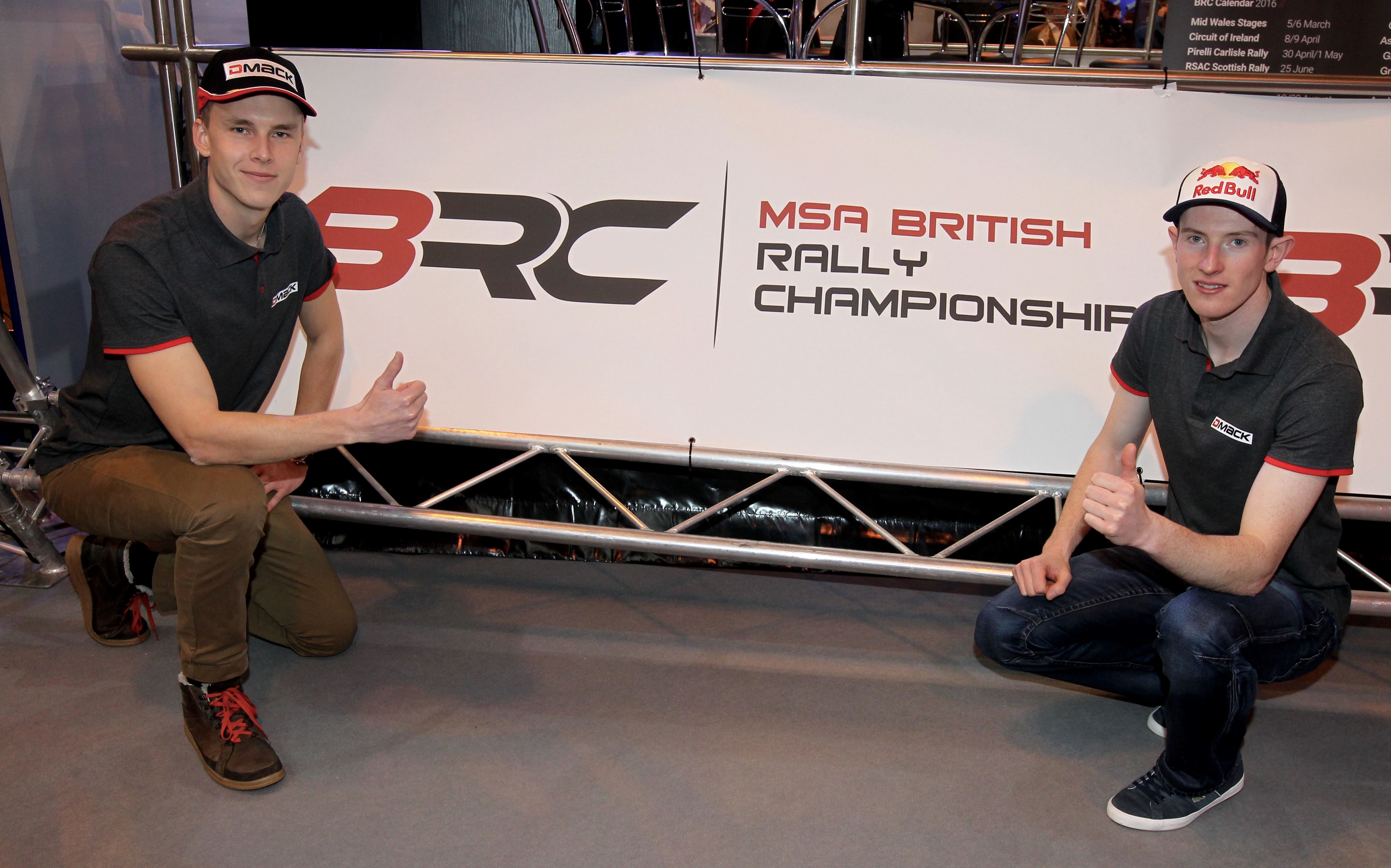 As it revs up for its eagerly-anticipated return following a year’s hiatus, the MSA British Rally Championship was the talk of the town at the Autosport International show yesterday (14 January), with a number of exciting announcements.
Kicking off with the official launch of the DMACK British Rally Team, the good news continued with the crowning of the Vauxhall Motorsport Junior Rally Team prize-winners, the arrival of Toyota and the confirmation of European Rally Championship driver Neil Simpson’s programme for 2016.

As revealed on Wednesday ahead of the show, M-Sport FIA World Rally Championship star Elfyn Evans will partner talented Finn Max Vatanen – son of double BRC Champion Ari – in a two-car assault on the British series. All three were present to officially launch the new DMACK British Rally Team in front of hordes of interested show-goers.

Evans will dovetail his BRC campaign with an assault on the WRC2 Championship, and the 27-year-old spoke highly of the revamped series and new team-mate Vatanen.

“The BRC is looking fantastic and the organising team have done a great job to turn the championship around for the year ahead,” enthused the WRC podium-finisher. “With the new structure of classes, the prizes on offer and the buzz back, it will be a fascinating season.

“I’m feeling positive and want to start enjoying driving again, and what better way to begin the BRC than with some really great stages on my home patch in Wales? I want to win rallies and get my name on the championship trophy, but I know I will have a target on my back!”

Partnering the young Welshman in the second DMACK seat is 25-year-old Vatanen, who is looking forward to competing in Britain and measuring himself against his more established stable-mate.

“It is a big year and I have a big opportunity ahead of me, with some really great rallies to get to grips with and compete on,” he acknowledged. “I have heard so much about them from my dad, on-boards and DVDs so getting behind the steering wheel will be fantastic. Elfyn will be great to learn from. I could not have asked for a better team-mate as he will be a good benchmark not only for me but for the entire field.

“The series has returned to the good old days – being very similar to the World Championship. It has everything a rally driver can expect, from bumpy Irish Tarmac to smooth and fast roads on the Isle of Man and every type of gravel you can think of. If you learn how to drive fast in Britain, you can do it anywhere!”

Thursday afternoon saw the highly-speculated announcement of the Vauxhall Motorsport Junior Rally Team prize recipients. After initial applications, a shortlist was drawn up and a shoot-out held earlier in the week to find the best two drivers from around the world to pilot a pair of R2 Vauxhall ADAMs. Irishman Robert Duggan and Swede Mattias Adielsson will take part in a full campaign in the DMACK Junior BRC.

Toyota is a manufacturer synonymous with the BRC, with David Llewellin claiming back-to-back titles in a Celica in 1989 and 1990 before Jonny Milner repeated that feat with a Corolla WRC in 2002 and 2003. A new chapter will be written in 2016, as British firm RallyPrep fields a Toyota Motorsport GmbH-blessed GT86 CS-R3 on selected rounds in the BRC3 category. This eye-catching sportscar is set to become a firm fans’ favourite with its rear-wheel-drive, sideways antics.

Finally, European Rally Championship competitor Neil Simpson officially announced he will enter the BRC in a state-of-the-art Skoda Fabia R5. Having campaigned an S2000 model Fabia in previous years, the Englishman will now tackle the full season in the R5 variant and is expected to be competitive right from the off.

MSA BRC Manager Iain Campbell was thrilled with the BRC announcements on the opening day of the Autosport International show.

“The British Rally Championship stand provided a great platform for drivers and teams to announce their exciting plans for the upcoming season,” he said. “To have news from so many categories shows the incredible buzz around the series with just 50 days until the opening round in Wales.

“With Elfyn and Max in the new DMACK British Rally Team, this will undoubtedly offer the yardstick for a lot of competitors and to have Neil Simpson from the European stage in a very potent Skoda adds a welcome dash of variety to the top flight of the BRC. To see a Toyota broadside through the forests and Tarmac lanes will certainly bring a smile to many people’s faces.

“I am delighted to welcome Robert Duggan and Mattias Adielsson to the BRC family, and I would like to commend the Vauxhall Motorsport Junior Rally Team for offering such a fantastic prize and for helping to bring two very talented youngsters into the BRC. The DMACK Junior BRC just keeps growing and snowballing, with more competitors signing up to what will be a fierce proving ground for some of the best young rally drivers.”

The 2016 BRC season will be open to rally cars conforming to FIA-homologated classes. The top category will see the exciting R5 cars do battle with S2000 and RRC machinery at the front of the field, while support classes including the Junior BRC for R2 specification cars will showcase the very latest rallying models on the special stages. There is also a National Rally Cup for non-homologated cars that have an MSA log book, which will compete over the same events with the same challenges.

The revamped series will take in seven events across the British Isles as it tours England, Northern Ireland, Wales and Scotland before culminating on the iconic lanes of the Isle of Man. Asphalt special stages and gravel tests will see the country’s best drivers in the best cars fight for overall supremacy on the best events.

Keep tabs on all the latest BRC developments by visiting www.msabrc.com or following us on social media: MSA British Rally Championship on Facebook and @MSA_BRC on Twitter using #BRC.