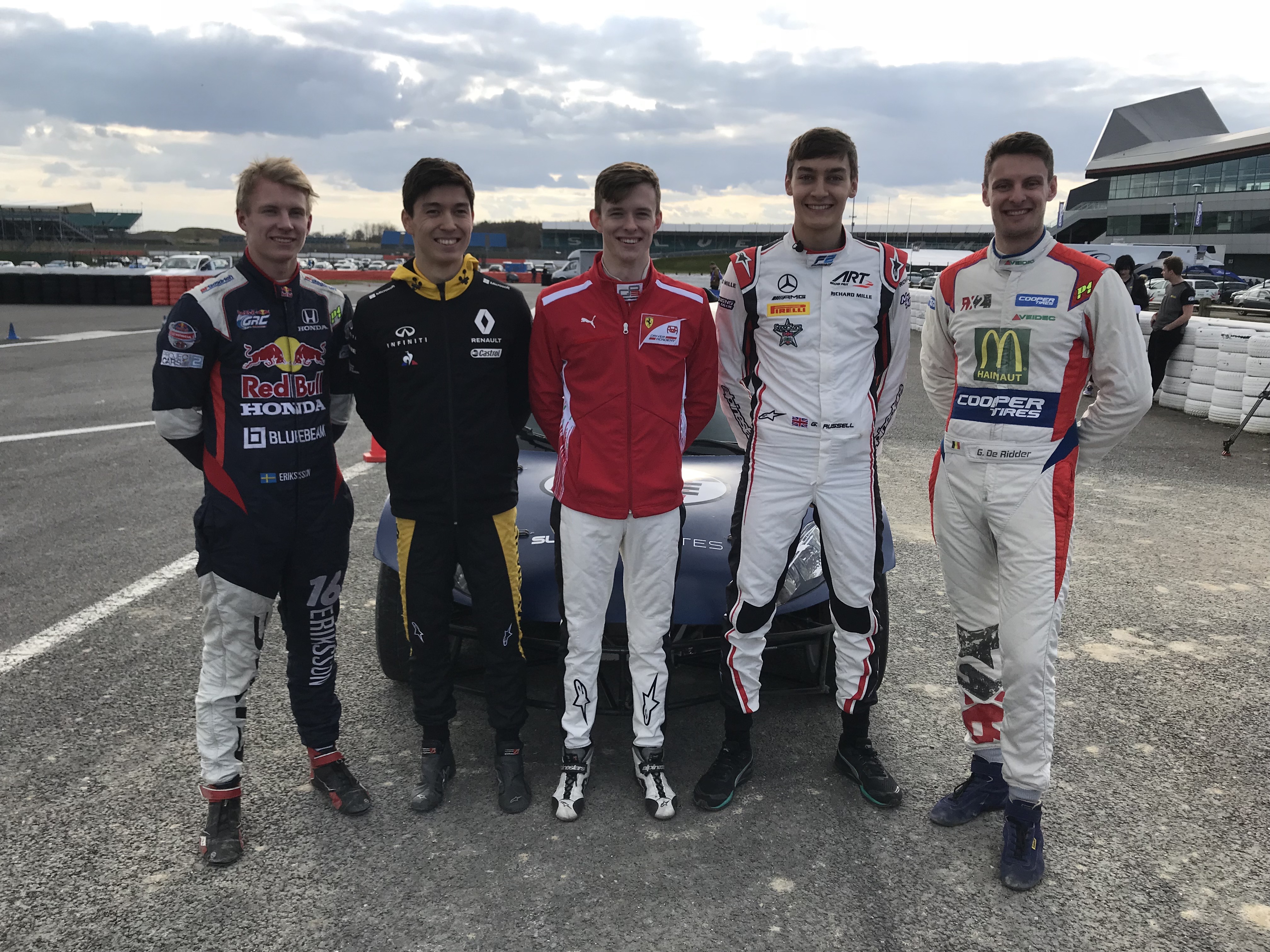 Three of Britain’s hottest young single-seater prospects were left waxing lyrical after trying out the RX2 International Series presented by Cooper Tires rallycross car at Silverstone last week, with their experience to be broadcast on Sky Sports F1 during this weekend’s Bahrain Grand Prix.

The highlight of the day for the trio was a high-speed blast in 310bhp, mid-engined, four wheel-drive Supercar Lites machinery – as will be used by all 18 full-time RX2 competitors this year across the seven-round campaign, which includes the eagerly-anticipated Speedmachine festival at Silverstone’s brand new rallycross track in May.

RX2 is the acknowledged feeder series to World RX – a breeding ground for the rallycross stars of the future, much like Formula 2 and GP3 are to Formula 1. Mercedes-AMG Petronas Motorsport’s official F1 reserve driver Russell and Ferrari F1 Driver Academy member Ilott both received tuition from reigning RallyX on Ice and former GRC Lites Champion Oliver Eriksson, who taught them the tricks of the trade before they took to the wheel themselves.

“Unbelievable – just outrageous!” enthused 20-year-old Russell, the reigning GP3 Champion and a previous winner of the prestigious McLaren Autosport BRDC Award. “The power and grip on the Tarmac section were a real shock – so much higher than I’d been expecting, and on the gravel, it was just crazy. I’ve genuinely never experienced anything like that before.

“I really got the chance to throw the car around and it was the first time I’ve taken a jump in a racing car! It was incredible – one of the most fun cars I’ve ever driven. I already want to have another go…”

“That was pretty impressive and very cool – I really enjoyed the experience,” echoed Ilott, a multiple race-winner in the FIA Formula 3 European Championship. “It’s a really special car to drive. I didn’t expect it to be as quick as it was, and it generated a lot of grip in the asphalt sections of the track.

“It’s a very well-balanced piece of kit that handles the transition from the asphalt to the gravel really nicely, and I was able to slide it around a bit too, which was a lot of fun. It takes a battering out there and just soaks up all the abuse!”

Aitken, meanwhile, paired up with Guillaume De Ridder who, like Eriksson, will contest the 2018 RX2 campaign with defending champions Olsbergs MSE. Both the Brit and the Belgian are closely affiliated with Renault Sport Formula One Team, the former as official reserve driver and the latter as a powertrain engineer.

“What an awesome experience!” grinned Aitken, runner-up in GP3 last year. “The car has way more grip than I’d expected, particularly on the Tarmac. The more you attack, the more it rewards you and the more your confidence builds, which is very enjoyable.

“It was also cool to hook up with my fellow Renault F1 team member Guillaume – the common link meant we instantly spoke the same language, and he was a great tutor. The only disappointment was that we didn’t have more time in the car – I’d love to have another go at some stage…”

Eriksson – who has no shortage of rallycross experience under his belt despite his tender age – was clearly impressed by the three single-seater stars’ performance inside the cockpit. You can catch it on Sky Sports F1 at 11:00 this Saturday, 7 April in a feature entitled ‘F1 – The Next Generation’ directly ahead of the channel’s live coverage of the season-opening Formula 2 race. Repeat broadcasts will air at 18:50 on Saturday and 12:05 on Sunday.

“They all appeared to quickly get a good feeling for the car, and from the second lap onwards, their braking was pretty much on-point,” the 19-year-old attested. “What struck me the most was the speed with which they adapted to the gravel, which is completely alien to them and fair play, they got some good air over the jump too…”

Both RX2 and World RX will return to the track at Silverstone for Speedmachine on 26/27 May. Tickets can be purchased at www.speedmachine.com/tickets