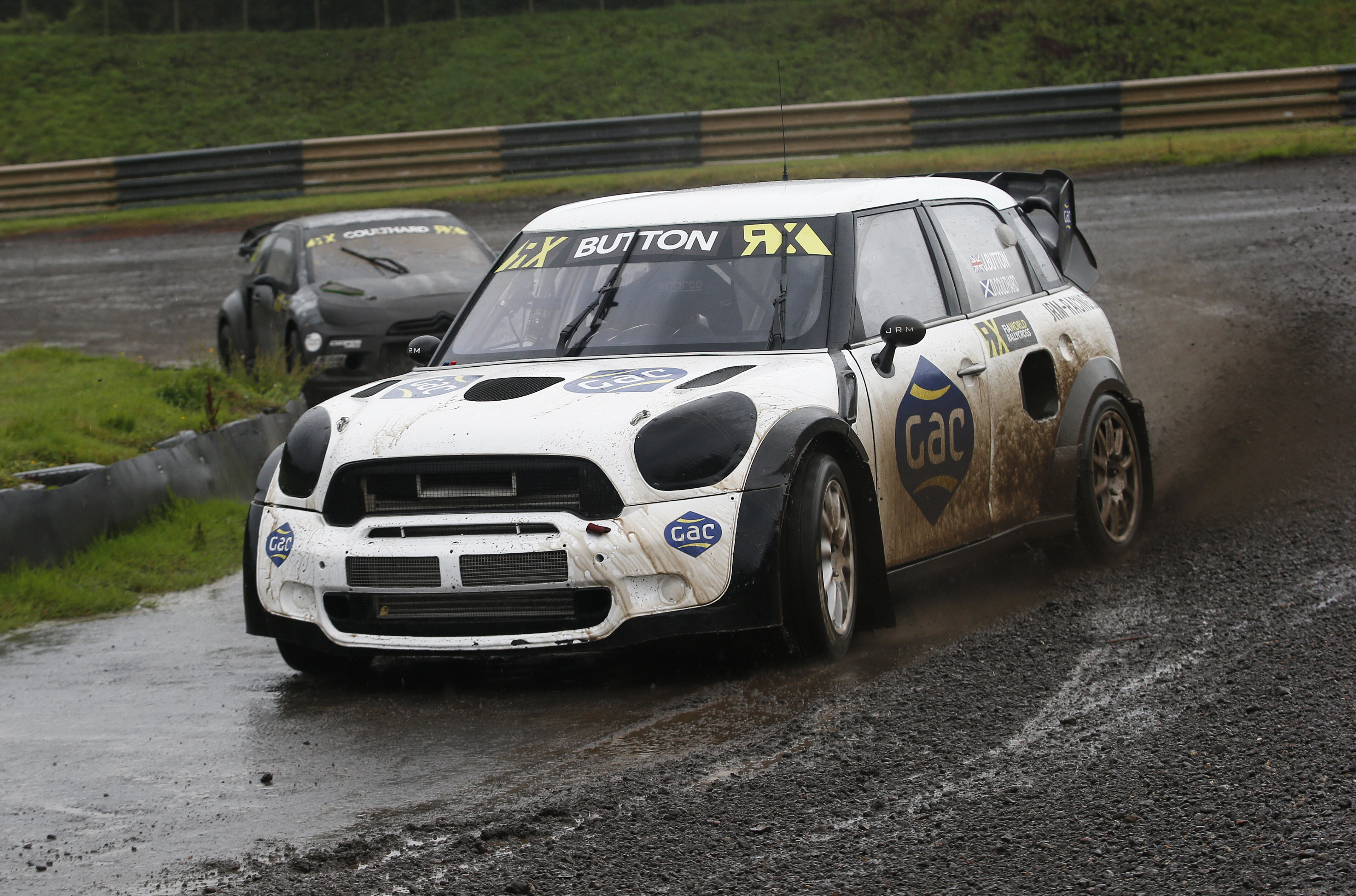 Formula One World Champion Jenson Button took a drive down memory lane at Lydden Hill today, as he and fellow grand prix-winner David Coulthard got to grips with some flame-spitting beasts ahead of the British Rallycross Championship in association with the Shannon Group on Bank Holiday Monday (31 August).

Button and Coulthard made the trip to Lydden Hill – the sport’s spiritual home – just days before the crowd-pleasing British Rallycross Championship roars into Kent. The duo were filming for a feature to be screened as part of the BBC’s coverage of a forthcoming F1 race, transporting Button back to his childhood days when he used to watch his late father John competing in the discipline.

After watching archive footage of his father in action, Jenson took to the wheel of a similar car, normally campaigned by James Harrold in the Retro Rallycross Challenge, which will form part of the British Rallycross bonanza on Monday and awards the John Button Memorial Trophy to its champion.

The experience marked the McLaren-Honda star’s rallycross debut, and after learning the Lydden Hill lines, he and Coulthard returned to the track in current day monster machinery.

Button climbed into the cockpit of a 500bhp JRM Racing Mini – as driven to the final by Guy Wilks when the FIA World Rallycross Championship presented by Monster Energy made its annual trip to Britain back in May – with Coulthard attempting to tame Liam Doran’s 600bhp DS3.

“It’s been a very special day,” he reflected. “It brought back a lot of memories. I grew up with rallycross – it was where it all started for me when I was four or five-years-old. I used to watch my dad racing back in the mid-eighties and I loved hearing the car – it was so loud! I wouldn’t be F1 World Champion if it hadn’t been for my dad and the grassroots of rallycross – that was where I caught the motor sport bug.

“It was a mega experience today and completely different to what I’m used to. Both cars were great fun to drive – they’re a lot more powerful than when my dad raced, but the same principles apply and you need real skill to master them. On your own, it’s scary enough – imagine going up against five other drivers!

“Rallycross is unbelievably competitive now, very professional and a lot of fun. It’s a really exciting discipline and it’s growing again like it was in the eighties on both the British and World scene, which is great to see.”

Coulthard at least had some prior experience of driving a rallycross car – having gone head-to-head with reigning world champion Petter Solberg in last year’s Race of Champions in Barbados – but the Scot was nonetheless awestruck and full of praise for a discipline that is enjoying a prolonged period of resurgence on an international scale.

“My eyes were out on stalks all the time!” quipped the 13-time grand prix-winner and current BBC F1 commentator. “I thought there was a small murmur of someone screaming for help inside the cockpit and then I realised it was me! I was still shaking when I got out – it’s a hell of a ride! These cars really put a smile on your face.

“Rallycross is a very different form of motor sport to what I’m used to and it requires a high level of commitment, because the drivers have to deal with an ever-evolving mix of asphalt and gravel that changes from lap-to-lap which means they need to be extremely reactive. I have tremendous respect for them, because there are just so many variables.

“For Jenson, I think this was a little walk down memory lane – it was John Button giving up his own racing career to focus on Jenson’s that allowed him to fulfill his dreams – while for me, it was a fascinating, adrenaline-fuelled day. I’ve always enjoyed trying out different sports to appreciate how skilled their competitors are.

“Lydden Hill is a fantastic, family-friendly facility with a lot of history, top-class viewing and an accessible paddock that makes this discipline particularly appealing. It’s a great way to spend a day, and I would thoroughly recommend to anyone who hasn’t been here or has never watched rallycross to come along.”

Throughout the day on Saturday (29 August), British Rallycross cars will be on display in Canterbury High Street. Tickets will be available for Monday’s racing priced at just £15, or can alternatively be purchased either online or on the gate. Accompanied children aged 12 and under will be admitted free of charge. See www.lyddenhill.co.uk for further details.