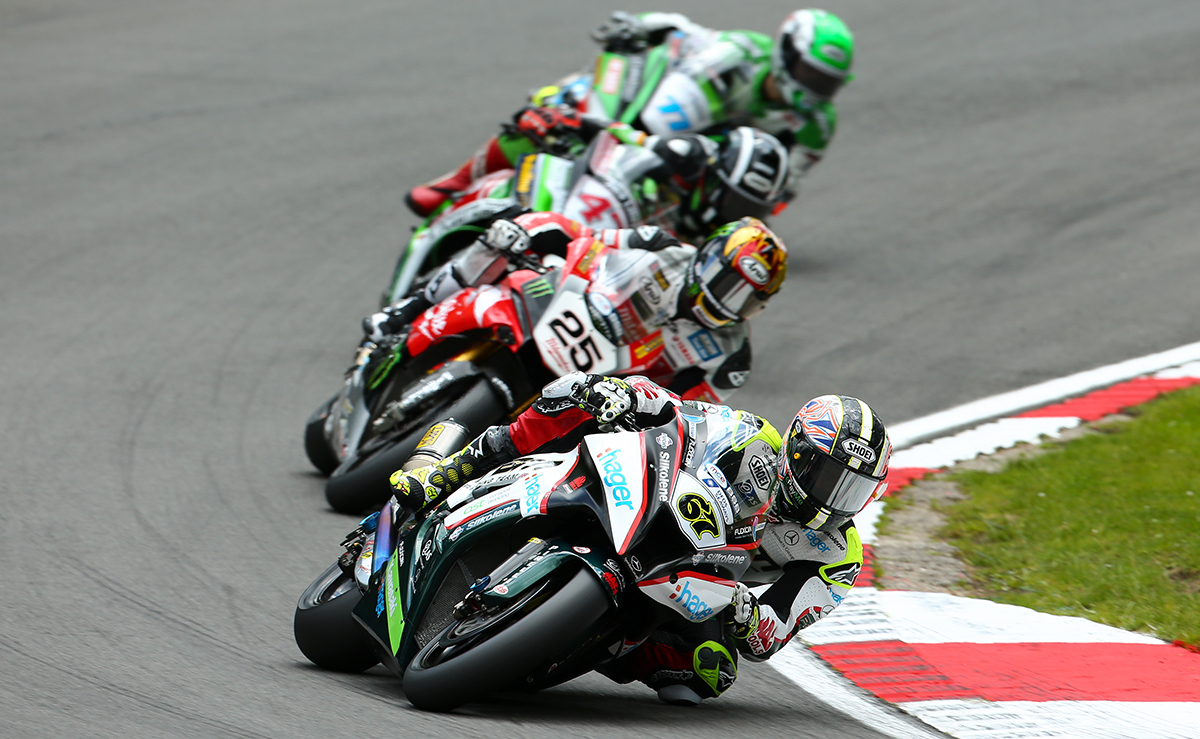 The two-wheeled heroes of the MCE Insurance British Superbike Championship are steeling themselves for arguably their greatest challenge of the season on 31 July – 2 August, as they rev up to return to ultra-fast Thruxton.

BSB is the UK’s biggest and best bike racing series, and Thruxton’s flat-out curves and sweepers offer competitors one of the sternest tests of the year – it truly is a place where bravery is rewarded, with top speeds exceeding an eye-watering 180mph. The popular Hampshire circuit will play host to the JG Speedfit round, and is set to kick-start the second half of the 2015 campaign in style.

Huge crowds always pour through the gates over the mid-summer weekend, with thrilling elbow-to-the-ground action guaranteed. In evidence of that, you need only cast your mind back to this time last year, when Josh Brookes, Shane Byrne and Ryuichi Kiyonari waged a breathtaking race-long scrap for supremacy and flashed across the finish line separated by less than half-a-second.

PBM Kawasaki rider Byrne and Milwaukee Yamaha’s Brookes remain embroiled in battle 12 months on, with the four-time BSB Champion opening up a healthy early advantage in the standings before his Australian rival hit back with a dominant double victory in the most recent outing as ‘Shakey’ came a cropper at over 120mph.

Between them, Byrne and Brookes have clinched five of the last six successes at Thruxton and will begin the weekend hotly-tipped to continue their captivating no-holds-barred duel for glory, but there are all manner of pretenders eager to knock them off their perch.

James Ellison (JG Speedfit Kawasaki) has actually prevailed more often than Brookes in 2015 and has been a consistent thorn in the side of the two leading title protagonists. Local favourite Tommy Bridewell – hailing from just up the road in Etchilhampton, near Devizes – has similarly tasted victory champagne this year and will be eager to make the most of his ‘home advantage’ aboard the Tyco BMW.

Three-time BSB Champion Kiyonari (Buildbase BMW) has yet to reach the rostrum this season after claiming pole position in the curtain-raiser, but the Japanese ace can never be discounted, whilst two legends of the motorcycling world are also expected to lock horns.

Former MotoGP and World Superbike Championship star John ‘Hopper’ Hopkins was an injury replacement for Lloyds British Moto Rapido Ducati last time out and is likely to remain on the bike at Thruxton, and Stuart Easton’s ankle-breaking accident at Brands Hatch means the PBM Kawasaki man will be ‘subbed’ by multiple Isle of Man TT winner Ian Hutchinson.

A trade village overflowing with memorabilia, a Supercar display and £5 rides on Thruxton’s state-of-the-art Skid Pan are additional attractions, and for early birds, a Pit Walk at 09:20 on Sunday morning offers the opportunity to meet the riders and grab a few autographs and selfies with the stars. What’s more, once the racing gets underway, giant TV screens at the Chicane and Complex will make sure the tens of thousands of on-site spectators don’t miss a second of the thrills ‘n’ spills.

“It’s fantastic to be welcoming British Superbikes back to Thruxton for the JG Speedfit round,” enthused Thruxton Group Managing Director Bill Coombs. “Last year’s event was phenomenally well-attended, and we were blessed with brilliant sunshine and some spectacular racing. There’s no reason to expect any different this time around!

“The championship battle is hotting up nicely and there are no shortage of potential ‘spoilers’ in the field ready to upset ‘Shakey’ and Josh’s party! The action will be fast-and-furious from the moment the riders take to the track, and some superb viewing areas mean fans can soak up every moment of the entertainment. I can’t wait!”

Advance tickets begin at just £7 for Friday entry, £10 on Saturday and £26 on Sunday. Accompanied children aged 15 and under are admitted free-of-charge. All advance race day or weekend ticket-holders will be entered into a prize draw to win a pillion ride on race day. For further information and to buy, visit http://www.thruxtonracing.co.uk/racing/bsb or call 01264 882200 (Option 1).

A short preview video to whet the appetite can be viewed at: https://www.youtube.com/watch?v=hETlf_fvbrY