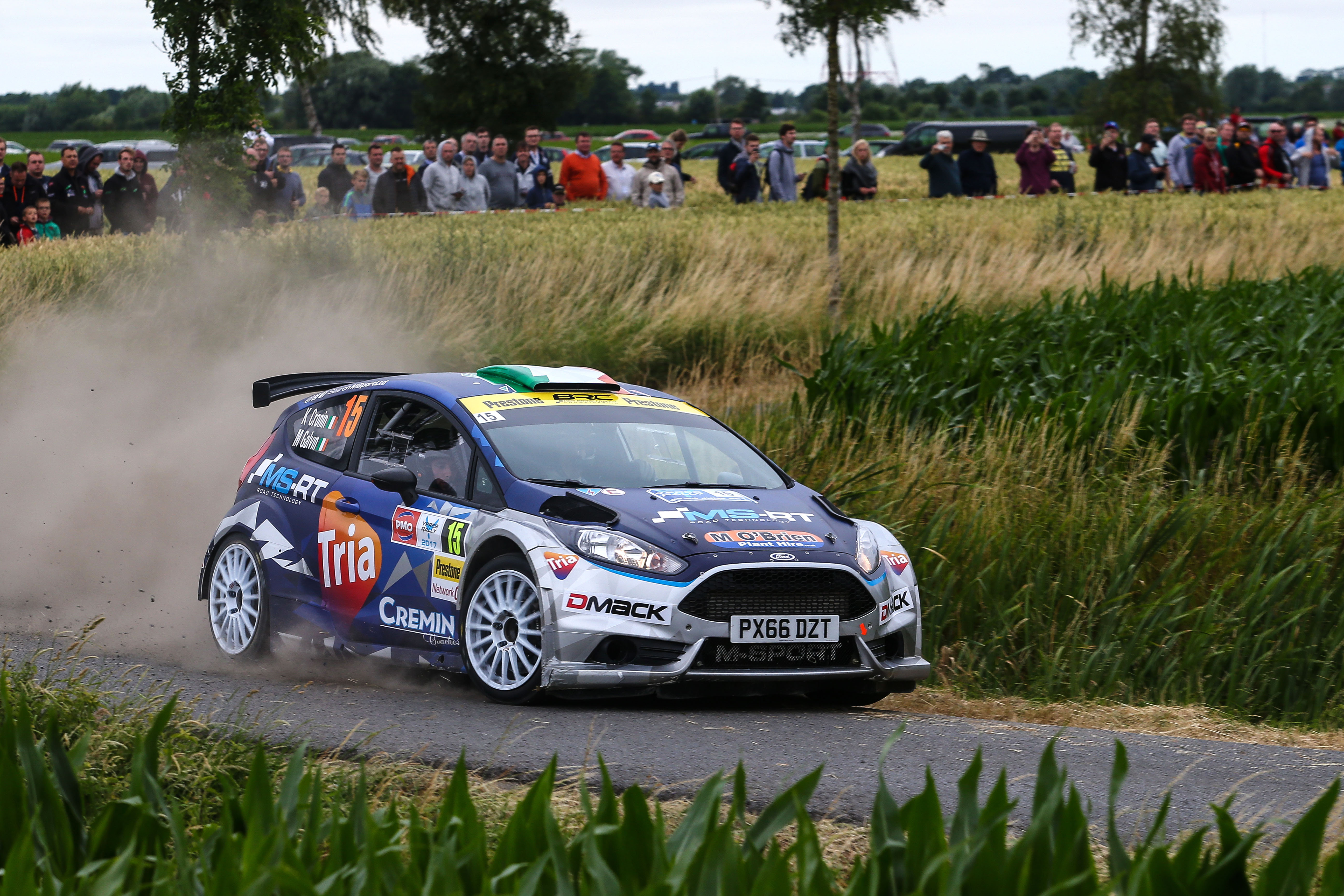 The action-packed Prestone MSA British Rally Championship heads overseas to Belgium for the legendary Renties Ypres Rally, the latest round of the pulsating series (22-23 June). England may struggle for honours in the FIFA World Cup in Russia this month, but fear not, the Prestone BRC team are sending the best from all of the home nations in the quest for European silverware. Tony Pond, Jimmy McRae and Kris Meeke are the only British drivers to have lifted the trophy in northern Belgium so far, but that could change in 2018.

Two drama-filled days comprising more than 160 competitive miles in daylight and atmospheric night-time conditions on the fast and flowing Belgian Tarmac roads await the BRC stars. In the series’ 60thanniversary season, the finest BRC crews will go toe-to-toe with some of the best in the world including FIA World Rally Championship leaders Thierry Neuville and Nicolas Gilsoul in a factory Hyundai i20 R5 and last year’s Ypres Rally winners Kevin Abbring and Pieter Tsjoen in their brand new Citroen C3 R5.

As well as chasing the overall podium, competitors will be vying for the Tony Pond Award, which will be presented to the first BRC crew across the finish line. There will also be a Junior Tony Pond Award – adding another incentive for rallying’s emerging talent to go for glory in the Flanders region.

Leading the championship after the first round in England are Matt Edwards and Darren Garrod in their M-Sport prepared Ford Fiesta R5. The Welsh pairing claimed the opening BRC event on the gravel of the Pirelli International Rally – their breakthrough BRC win. Ypres is a happy hunting ground, with the Fiesta duo having finished second in the BRC section and tenth overall last year. Edwards will be hoping for more of the same this season as he bids to maintain his championship lead.

Keith Cronin and Mikie Galvin topped the British Championship crews in Ypres last year – receiving the Tony Pond Award in the process, courtesy of a fine seventh overall in the main event. With a year’s knowledge under their belts and a switch to a new Michelin-shod Hyundai i20 R5, the reigning British champions will look to lead the British attack as the BRC takes the fight to the local Belgian drivers.

Rhys Yates and Elliott Edmondson have undertaken the equivalent of a backpacking trip as the English team have rallied all around Europe, getting to grips with the new Skoda Fabia R5. Second on the opening round will give them confidence for an all-out assault for British honours in Ypres as the pair relish the switch to Tarmac. Yates took his first outright win on the recent Rally van Wervik against strong opposition – the perfect warm-up for Ypres.

Two fellow British teams in Skoda Fabia R5s will be hoping for better luck in Flanders this season. Marty McCormack, a driver who won the hearts of the local fans with a spirited drive in an S2000 car in 2015, rolled out of contention in dramatic style on the second stage of the rally last year. With David Moynihan sat alongside, the Irish pairing will be striving for their first BRC win and a change of fortunes this time around in their Kumho-backed Fabia R5. David Bogie similarly rolled out of the opening round of the championship in England and will be eager to get his championship back on-track. The 2011 BRC title-holder will be joined by the experienced John Rowan on the pacenotes as the pair aim to be top of the BRC pile at the spectacular Ceremonial Finish in the DMACK-shod Fabia R5.

Tarmac ace Alex Laffey and co-driver Patrick Walsh chalked up their best BRC result on gravel on the Pirelli Rally in sixth place and will be pushing for their first BRC podium in their Ford Fiesta R5, while BRC newcomer Lawrence Whyte will be learning the art of ditch-cutting on his first foray to Ypres. Fellow Scot, Paul Beaton will join the young charger in the striking Fiesta R5.

Junior BRC heats up ahead of Tarmac test

Norwegian Steve Rokland and English co-driver Tom Woodburn produced a masterclass on the opening round of the season as the Anglo-Norwegian pairing swept their way to victory in their Peugeot 208 R2. Rokland also played his Joker card, which put him a further five points clear at the summit of the standings.

Chasing Rokland was the hard-charging James Williams in the Network Q Vauxhall ADAM R2. Williams recorded his best-ever finish with second place in the series curtain-raiser and now returns to the scene where he clinched his maiden BRC podium. The ADAM is a strong car on the sealed surface and Williams along with Ross Whittock will be gunning for glory in Belgium.

2017 Junior BRC runners-up William Creighton and Liam Regan excel on the Tarmac and pushed hard for Junior BRC honours last season. With their Peugeot 208 R2 firing on all cylinders, you would be brave to bet against the pairing from Northern Ireland for Ypres glory.

The Peugeot 208 R2 is a popular car for the Junior BRC and will be great to watch in the hands of the hard-charging Marty Gallagher, James Wilson and Josh Cornwell.

Kicking off her BRC campaign in Ypres is 2017 Ladies Champion Nabila Tejpar, who hopes to use her recent outing on the Portuguese WRC event to good effect to put her 208 R2 into the mix.

The MH Motorsport fold will field a brace of Fiestas for the rapid Josh McErlean and series returnee Alex Waterman, who will both be pushing for their first points of the season. The Harper Adams University team will be hoping for a turn in fortunes after a disappointing opening round in Carlisle, while the final Fiesta R2T in the BRC will be in the hands of William Hill – a man looking to bank more points to swell his account.

Kevin Horgan had a torrid opening round in England but a return to his favoured asphalt surface will give the Skoda Fabia R2 driver confidence for next weekend.

Cadets embark on Ypres adventure
Jordan Reynolds leads the way in the Cadet Cup after the Pirelli International Rally, and the young Englishman will hope to make it two from two in Ypres. He won’t have it all his own way however, as Fred Field will be out to impress in his Opel ADAM Cup car while they will both be chased hard by Bart Lang (England), Finlay Retson (Scotland), Johnnie Mulholland (Ireland) and Will Graham (England) – all in Ford Fiesta R2s. All will visit Ypres for the first time, creating an exciting, unpredictable battle for supremacy in what will be one of the closest-fought classes on the event.

John Morrison and Peter Carstairs bring the big Mitsubishi Evo 9 to Belgium for the first time and will be eager to compare then National Rally Cup machine against the local stars.

“After an exciting opening round in Britain, we travel across the water for our overseas round in Belgium for the legendry Ypres Rally,” enthused Prestone BRC Championship Manager Iain Campbell. “Last year our plucky British crews braved the cuts, entertained the crowds and fell in love with the Belgian Tarmac. We have already seen the pace notched up another level from our competitors this season, and with most of the route the same as 2017, I think our BRC crews can bring a strong challenge to the local drivers. There has been a good build-up with the Brits versus the Belgians, and we would love to see a BRC crew getting close to an overall rostrum in 2018. Let battle commence.”
Brand Manager for Prestone, Stephanie Hickford said: “Ypres is a huge event in the Prestone British Rally Championship calendar and we’re so excited to be a part of it.

“The weekend is set to be exciting and exhilarating for all involved, including drivers and spectators. We can’t wait to welcome fans to the site, and chat with them about their favourite drivers and Prestone BRC moments.

“As headline sponsor, we’ll have a presence at the show, and our brand ambassador and top motoring journalist Henry Catchpole will also be in attendance, providing live updates, commentary and snaps from the show.”

The Renties Ypres Rally is open to the public and those wanting to see drivers in the heat of battle across the weekend can watch the action on every iconic stage. Tickets are 45 Euro (£40) with the action just an hour drive from the Eurotunnel and Port in Calais.  For those who want to soak up the start, finish and service park atmosphere can do so free or charge. The successful crews spray the champagne on Saturday evening and into the early hours of Sunday morning.

Shakedown on Thursday evening and many of the stages across the weekend will be Streamed live on Facebook via the Ypres and BRC channels.
For further information, head to msabrc.com and to view the full range of BRC merchandise for the new year, visit www.prestonebrcshop.co.uk.