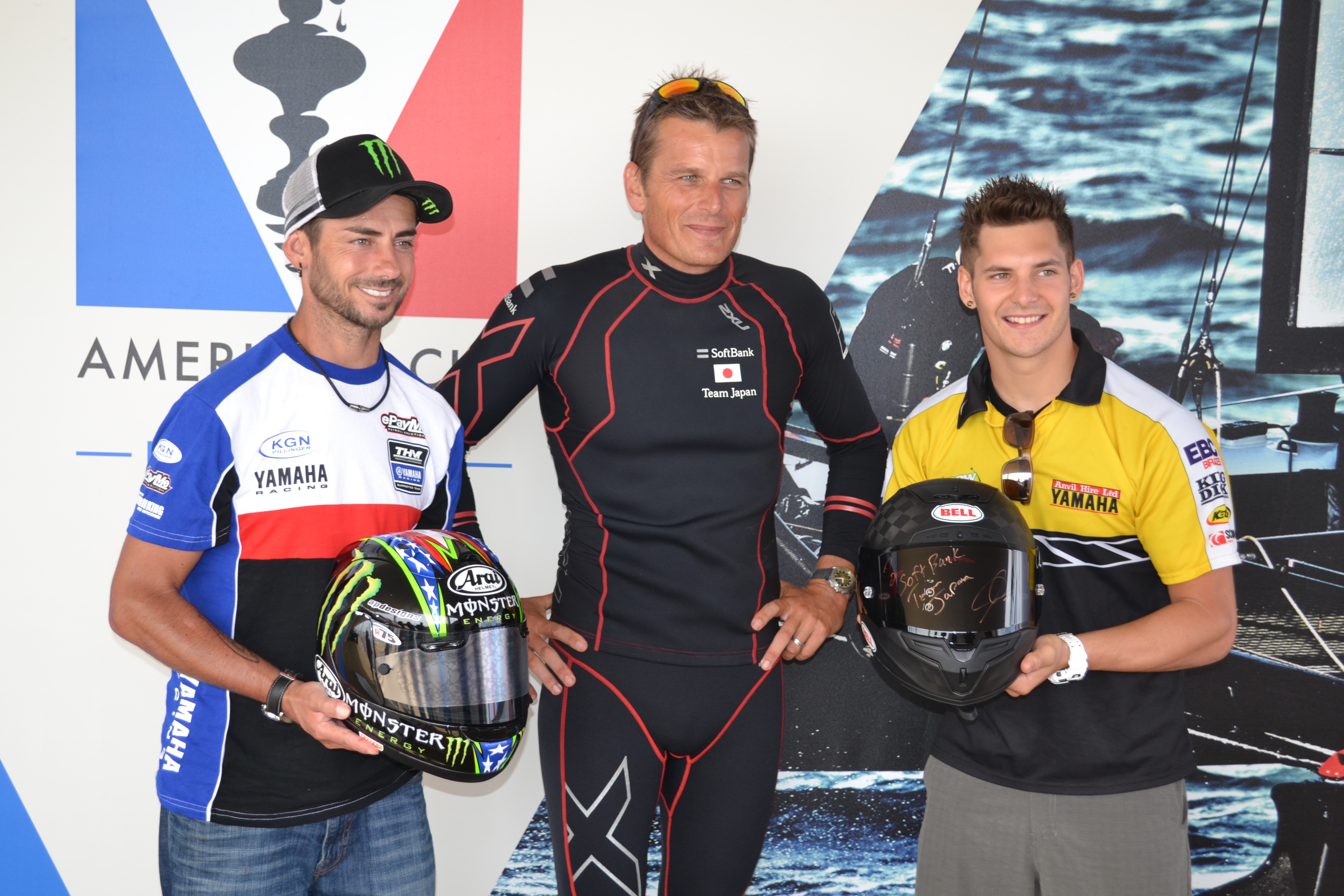 Ahead of this weekend’s MCE Insurance British Superbike Championship (BSB) race meeting at Thruxton (22-24 July), riders James Rispoli and John ‘Hopper’ Hopkins got a taste for life on the high seas with a visit to the Louis Vuitton America’s Cup World Series in nearby Portsmouth.

BSB and the America’s Cup might be two very different sporting disciplines, but they are united by the common themes of speed and precision. The fun began when SoftBank Team Japan yachtsman Yugo Yoshida set sail for Thruxton – the fastest circuit in Britain, where Superbike competitors reach almost 200mph – for an adrenaline-fuelled pillion ride with Rispoli aboard a 1,000cc Yamaha R1 road bike.

When he removed his helmet afterwards, the 32-year-old Olympian – the first Japanese sailor in 15 years to join an America’s Cup team – could scarcely wipe the smile off his face.

“That was very different to anything I’ve ever done before and an amazing opportunity!” ‘Yoshi’ enthused. “It was incredibly quick and an awesome experience and, I have to admit, a little scary too!

“It really gave me an appreciation for the bravery and skill required to ride at those speeds – let alone race. The G-forces were a real eye-opener and although I always felt safe, it was also very much on-the-edge. The only problem is, I think I might have caught the bug now…”

The following day, Rispoli together with countryman and fellow Yamaha rider Hopkins headed for Portsmouth as guests of SoftBank Team Japan – the Japanese challenger for the 35th America’s Cup, to be held in Bermuda in 2017.

There, the duo met team CEO and winning America’s Cup skipper Dean Barker and exchanged jerseys, before Rispoli took to the water for a once-in-a-lifetime opportunity as a guest racer aboard the team yacht.

SoftBank Team Japan is the youngest squad in the contest having only been in existence for a year, but after achieving its maiden podium finish in Chicago last month, the momentum is swiftly building and 25-year-old Floridian Rispoli was palpably impressed by what he saw.

“It was cool to take ‘Yoshi’ out on the bike and to give him the BSB treatment at Thruxton with a blast around the track,” grinned the two-time AMA Superbike Champion. “He seemed to really enjoy himself, and it was awesome to see his reaction afterwards.

“Then the boat ride was like nothing I’d ever done before. It was every bit as intense as racing a superbike, and the choreography between the crew members was just crazy! Even though it was only a practice run, with all the other teams out there it felt like a real race and we were literally threading the needle all the time.

“The wind comes out of nowhere and just hits you, and I think the coolest thing for me was that I was able to understand the way it all worked without knowing the rules. It really was something else – big thanks to SoftBank Team Japan for such an amazing opportunity.”

BSB rookie Rispoli – nicknamed ‘The Rocket’ – will be back on-track at Thruxton tomorrow (Friday) for practice, and is eyeing up a strong weekend around the circuit where he holds the British Supersport lap record.

Tickets are still available on the gate for £5 on Friday, £15 on Saturday and £32 on Sunday (£42 with paddock pass), with weekend tickets on sale for £38 and accompanied children aged 15 and under admitted free of charge. The weather forecast is scorchio – and the racing is set to be just as hot. Don’t miss it!