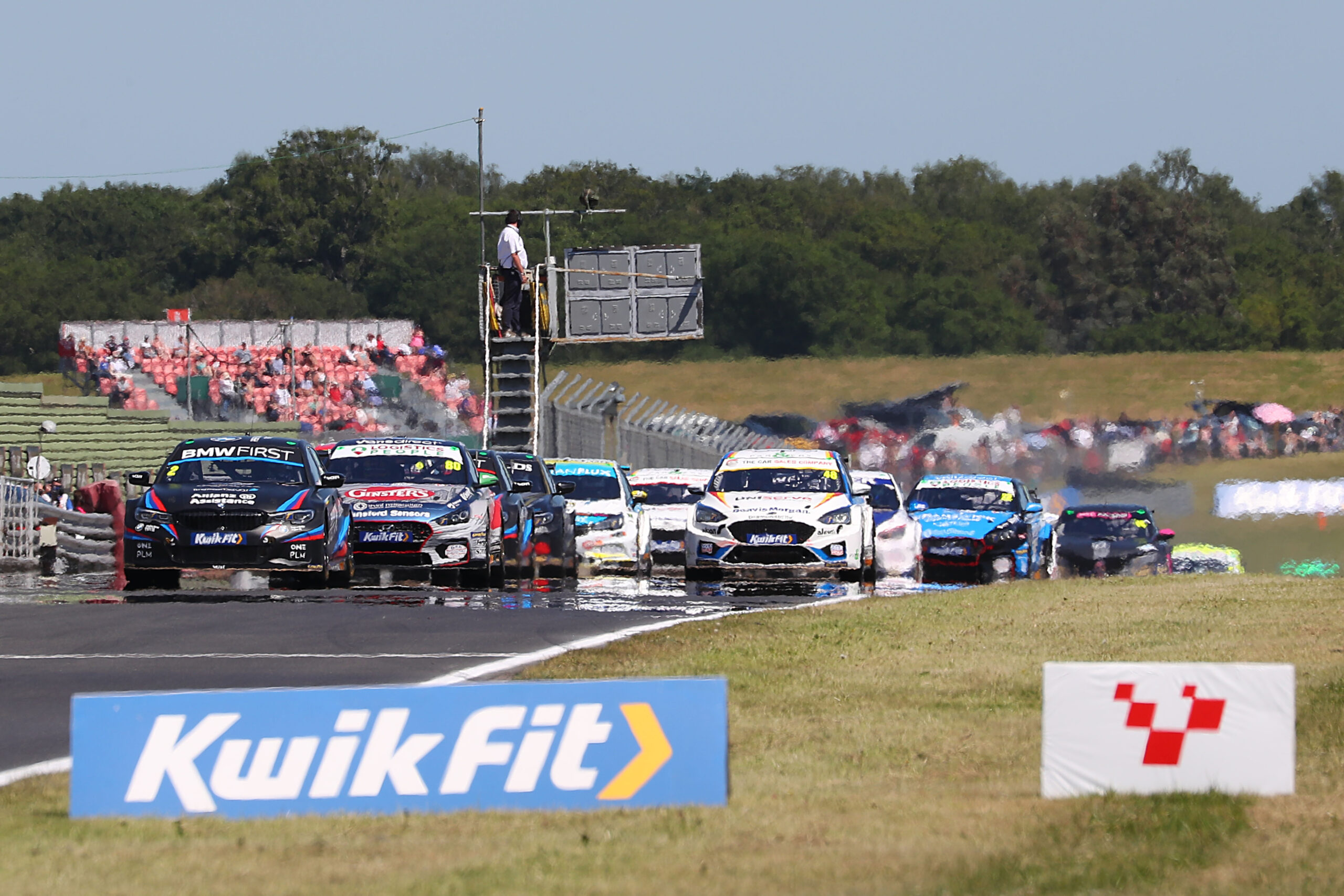 Win apiece for Turkington, Sutton and Ingram as fans return

The perennial contenders had endured mixed fortunes during the opening race weekend at Thruxton last month but bounced back in style around the 2.97-mile Norfolk circuit.

Team BMW’s Turkington repelled an early attack from Ginsters EXCELR8 with TradePriceCars.com’s Ingram to take his first victory of the season in the opening race.

Snetterton – basked in glorious sunshine throughout the weekend – also saw the return of the Goodyear ‘Option’ tyre, and the vast majority of the front-runners chose to utilise softer rubber for the first contest.

Ingram made a stellar effort on the opening tour as he hauled his Hyundai i30N alongside Turkington’s BMW 3 Series on no fewer than two occasions, but the four-time champion held firm whilst getting temperature into the tyres of his rear-wheel drive machine.

The lead duo traded fastest laps later in the bout, but in truth, Turkington was able to keep Ingram at arm’s length until the chequered flag – scoring an important win in the process and the 155th podium of his BTCC career.

Rory Butcher claimed a lonely third place, but it was a promising first 2021 podium for the Scotsman after his off-season switch to Toyota Gazoo Racing UK.

Sutton’s success was a completely different story as the Laser Tools Racing driver surged to victory, having started a lowly 11th on the grid in the second race.

The reigning champion made pass after pass in his striking #1 Infiniti Q50 and his impressive performance was confirmed when a late overtake on race-long leader Turkington clinched his second victory of the campaign.

The final place on the podium went to MB Motorsport accelerated by Blue Square’s Ollie Jackson after he came out on top of a fantastic battle with the Ginsters-backed Hyundai of Ingram.

Jackson looked to have lost out when Ingram nipped past late on, but the two-time race-winner would not be denied as he fought back to repass in the closing stages.

Ginsters EXCELR8 with TradePriceCars.com then scored its maiden BTCC victory, and the first-ever win for Hyundai machinery in the UK’s premier motorsport series, as Ingram took a popular triumph in the reversed-grid contest.

Ingram had to muscle his way past pole-sitter Stephen Jelley shortly after mid-distance as the leading BMW ran wide through turn one, before the positions were finally confirmed through the right-hand hairpin.

Infiniti man Sutton and Halfords Racing with Cataclean’s Gordon Shedden also bullied their way past the fading Team BMW car of Jelley, as their own battle intensified towards the finish.

Sutton held onto to second – moving to the standings’ summit in the process – whilst Shedden grabbed his first podium since returning to the BTCC.

There was another positive story in the final race as PHSC with BTC Racing’s Jade Edwards became the first female to score a championship point since Fiona Leggate in 2006, as the Honda driver finished 15th.

As the dust settled at a scorching Snetterton, Sutton now leads the Drivers’ standings by two points from Ingram, with Turkington a further three in arrears.

Unsurprisingly, Ingram and his Ginsters EXCELR8 with TradePriceCars.com squad hold the advantage in the fight for Independents’ honours.

Colin Turkington said: “It was so nice on the cool-down lap when you’ve had a race win and you see the banks on the back straight of the last half of the lap filled with spectators, and I just know they all had a mega night last night in the campsite. It adds so much to the atmosphere and feels extra special in front of the fans. That’s the first time we’ve been on the soft tyre this year, but I think we managed it well, and once again the 3 Series BMW is a fantastic weapon around Snetterton, it’s a good hunting ground for us.”

Ashley Sutton said: “I loved it! The car was absolutely phenomenal, and I decided to put on a good little show for the fans. After such a bad qualifying yesterday, and we didn’t make as much progress in Race 1 as we wanted to, we had our work cut out, but the ultimate goal was to win Race 2 and we’ve achieved that. I’m over the moon with that one (result in race three), I didn’t expect to get quite as high as that. If someone offered me this last night I would have definitely taken it – I’m delighted.”

Tom Ingram said: “Amazing! To come to the second weekend and take a second, then a fourth, then a win in the last race is amazing. I honestly can’t express just what a great job that everyone at Ginsters EXCELR8 with TradePriceCars.com has done, they’ve put an insanely good car under me. Of course, this means everything to me because I’m the one that’s getting to drive the car around, but for everyone in the garage it’s such a special feeling and to share it, I’m so pleased we’ve been able to do it. It’s also really nice to wave to some fans on the way in, so just absolutely fantastic.”