BTCC BLASTS BACK INTO ACTION 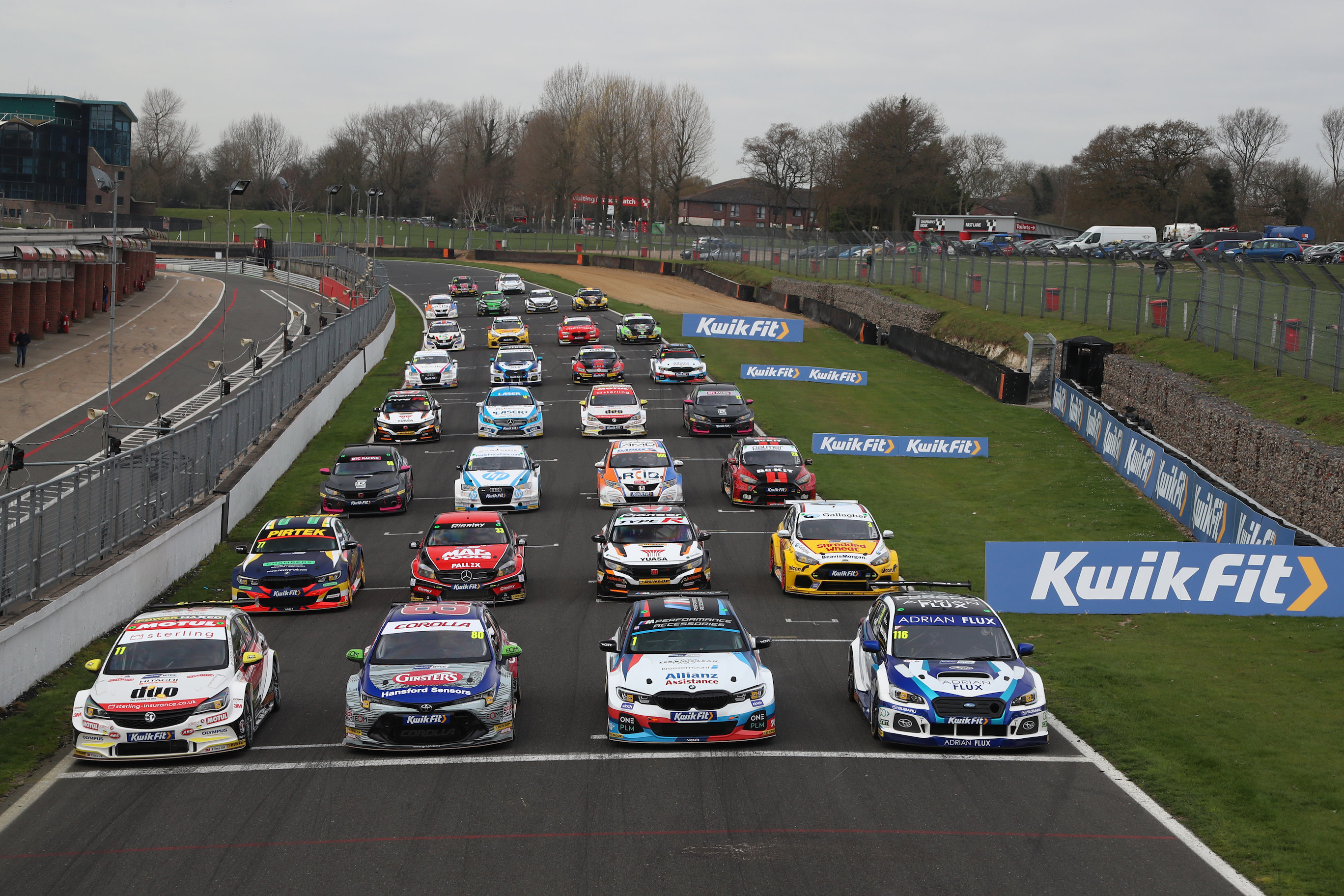 It was Cook who left the Kent venue with the standings lead as he followed his up his victory with two solid points finishes in the day’s other contests.

Adrian Flux Subaru Racing’s Ash Sutton took pole position during qualifying on Saturday, but that counted for very little once the action got underway amid changeable conditions on Sunday.

BTC Racing’s Cook won the opener after getting his tyre tactics spot on, as others switched to the new Dunlop BluResponse wet tyre with fog and drizzle shrouding the circuit.

Cook – starting the race in tenth – was the first of many further back to gamble on dry tyres, and it proved to be a tactical master class.

Adrian Flux Subaru Racing’s Sutton made a stellar getaway from pole position as a trio of BMWs blasted by the Sterling Insurance with Power Maxed Racing Vauxhall of Jason Plato.

Cook dropped back initially as the wet conditions sent cars twitching around the 1.2-mile Indy circuit, but the tide turned on lap five when Cook set the fastest lap in his new Honda Civic Type R (FK8).

The 27-year-old began ripping through the order – bringing along a number of other dry tyre runners with him – and in just a matter of minutes he was on to the tail of race leader Sutton.

The same two drivers enjoyed a famous battle for victory in the final race of the 2018 BTCC season, but this was a straight forward scrap as Cook scythed by Sutton’s Levorg with consummate ease.

Cook never looked back and it was merely a case of who would join him on the podium as the Dunlop SportMaxx-shod dry tyre runners began surging up the leaderboard.

It was local man Jake Hill who made his way into second in the TradePriceCars.com Audi, much to the delight of the partisan crowd, and Team Shredded Wheat Racing with Gallagher’s Tom Chilton followed him home.

Andrew Jordan then scored the first victory for the all-new BMW 330i M Sport as he surged his way through from 15th on the grid in race two.

Changeable conditions again greeted the grid ahead of the race, but unlike the first contest, all 30 drivers chose to start the race on the Dunlop SportMaxx dry tyre.

After myriad overtaking manoeuvres up and down the order in the early running there was a three-way tussle for the lead – between Cook, Sutton and Jordan – midway through the race.

The ballast-laden Honda of long-time leader Cook couldn’t hang on as Sutton made one of his textbook moves at Graham Hill Bend to snatch the lead. Jordan immediately put him under pressure however, and the 2013 Champion eventually cruised by the 2017 Champion on lap 16 to take the first win of the season for the Bavarian marque.

Sutton held on to second but not before withstanding an almighty effort from Adam Morgan, Jake Hill, Tom Ingram and Stephen Jelley.

It was Morgan’s Mercedes running side-by-side with Sutton’s Subaru as the quintet approached the chequered flag. A photo finish confirmed Sutton’s second place by just 0.022s from Morgan.

Chilton crossed the finish line first on the road but in a post-race appeal was adjudged to have gained an advantage during contact with Matt Neal’s Honda. The Surrey man failed to give the position back during the race itself and was therefore penalised by the addition of five seconds being added to his overall race time, handing Butcher with his first ever BTCC win.

Chilton’s Ford Focus had seemingly clinched first as he got by Neal across the start/finish line on lap 13, but not before the contact was made resulting in the post-race penalty.

Neal’s speed continued to dip and it all came to head when contact with Jelley’s BMW sent the Honda sideways through Clearways, allowing the charging Butcher past both of them in the older shaped Civic Type R, a move that would ultimately reward him victory.

Jelley and Neal continued their scrap and the latter faced last lap heartache when a wheel problem forced him to slow dramatically. Jelley went on to grab a hugely popular podium – his first since winning at Rockingham in 2009 and the first ever for Team Parker Racing in the BTCC.

Josh Cook and BTC Racing top the Drivers’, Independent Drivers’, Teams’ and Independent Teams’ tables at this early stage of the season, whilst Honda and BMW share the lead of the Manufacturers’ standings. Race three winner Rory Butcher is currently leading the Jack Sears Trophy.

Josh Cook said: “The guys at BTC Racing have really put a lot of effort in over the winter. That was for the team, they’ve done a great job. I didn’t think it was a big risk. It did start to get a bit slippy at the end with a bit more rain falling but it held off. I wanted to keep a gap to the guys behind just in case anything happened. There was no magic there just a bit of calculated risk and it’s paid off, luckily!”
Andrew Jordan said: “I’m a bit emotional to be honest. They [the team] deserve that. I believe in this car, I have a good feeling about myself and the team. Well done to BMW with the new 3 Series – it’s fantastic. Ash is probably one of the best racers in the championship. It was for me and him to fight out and we both want to get points, but I want to get wins as well. I’m sure people think because we’ve had limited testing we’ll keep getting quicker and quicker but I don’t think that’ll be the case just because it’s been rolled out in such good trim.”
Rory Butcher said: “It’s not the way you would like to win but you need a little bit of luck in the BTCC and I’ll take it. I’m so pleased to get the first win for AmD and it’s an amazing feeling to have a BTCC victory to my name. I felt quite calm today. We didn’t qualify in the top ten but my strategy was to just chip away in the races. I knew Matt (Neal) would fade a little bit on the soft tyre. It’s my first podium. Hopefully it’ll be one of many. We need to qualify a bit higher because when you’re at the front it’s most definitely easier. We’ve got the speed and the race-craft. We can do it.”