BTCC READY TO ROAR INTO CROFT 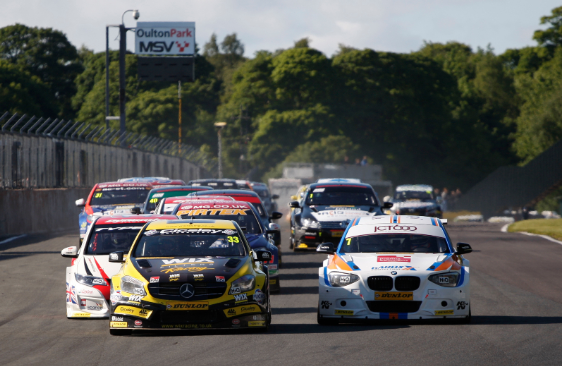 The strapline for the event is ‘The Force Comes North’ and few could argue with the sentiment as the Dunlop MSA British Touring Car Championship prepares to roar into Croft Circuit next weekend (27/28 June).

The biggest and best car racing series in the UK is in the midst of its annual pilgrimage around the country, and now it’s time for the North East to join the party as 30 of the world’s most talented touring car drivers battle it out for supremacy.

Croft marks the midway stage of this sensational and unpredictable BTCC season that has so far thrown up no fewer than seven different race winners.

Not only will this be a crucial weekend in the chase for the championship, but Croft also boasts its own milestones and headlines. Race three at the North Yorkshire venue will be the circuit’s 50th BTCC race in the modern era since its return to the calendar back in 1997.

One man chasing his own milestone is Jason Plato – the most successful driver in the history of the BTCC – who is just one rostrum away from an incredible 200th career podium in the series. Where better to do it than Croft for the Newcastle-raised racer?

At the other end of the scale, Nicolas Hamilton – brother of Formula 1 World Champion Lewis – will make his debut in the championship next weekend, which is sure to add yet more fever to an already highly anticipated event.

A big crowd is expected to descend on the charming and characteristic venue – not to mention the many more who will be watching the action live on ITV4 – as you’re always guaranteed fireworks when the BTCC comes to town!

Story so far: Five Star
The 2015 Dunlop MSA British Touring Car Championship grid contains five former champions in its ranks and judging by the start of the season it’s easy to see exactly why they remain the benchmark.

Recent victories for young northern lights Adam Morgan and Sam Tordoff signalled their intentions to be among the next generation taking it to the proven stars, but the combination of speed and consistency across a gruelling 30-race campaign are the much sought after qualities that seemingly only its past champions currently possess.

One man who has held the required blend throughout his remarkable career is double champion Jason Plato. The Team BMR driver has scored more victories and podiums than any other driver in the history of the series and his double success at Oulton Park last time out saw him surge to the summit of the standings.

Next up in the championship table is Honda Yuasa Racing’s duo of Gordon Shedden and Matt Neal. The Japanese marque only launched the new race version of its Civic Type R on the eve of the season, before it has even been released as a road car, but despite the tight timeframe for preparation it is fair to say that Honda hit the ground running.

Both Shedden and Neal have already taken wins in 2015, and with development to the new car ongoing it’s possible that the two title protagonists have even more performance left in the tank.

MG Triple Eight Racing’s Andrew Jordan is approaching a full calendar year without a win in the BTCC – not a statistic the 2013 champion will be particularly fond of – but he’ll be buoyed by returning to the scene of his last triumph. Not only is that a tonic for the 26-year-old but so is his recent form. Consistent finishes with his new team have led to a series of podiums and he’s edging ever closer to a maiden win for MG. If he can produce the goods next weekend then he’ll undoubtedly ignite his own title challenge.

Next up in the current standings is reigning champion Colin Turkington who has been dubbed the ‘King of Croft’ in recent seasons, having taken four wins at the track in the last two years. Admittedly those victories came in BMW machinery but now with the Oulton Park pace-setting VW CC there is every chance he can repeat the feat.

There are a number of other drivers who still fancy their chances for the championship too, but they’ll have to stage their own successes soon if they’re to keep pace with the ‘Five Star’ performers that currently lead the way.

Talking Point: Hamilton debut steals the headlines
Away from the scrap for this year’s BTCC crown there’s little doubting the big story surrounding next weekend’s event at Croft – the arrival of Nicolas Hamilton.

The brother of reigning F1 World Champion Lewis caused a stir during pre-season when announcing his partial campaign in the bumper-to-bumper tin-top championship. The news also had Fleet Street’s finest noting Croft in the subsequent coverage when it was confirmed that Hamilton would make his BTCC bow at the venue in the AmDTuning.com Audi S3.

“I am excited to be starting my British Touring Car Championship journey at Croft,” he enthused. “The unique mix of fast, flowing corners and tight, twisty sections means close wheel-to-wheel racing, especially in the BTCC.

“The crowds are always amazing there, giving support to all the teams and drivers over the weekend. I cannot wait to get back out at Croft and go racing!”

As he notes, he is returning to Croft having raced there previously in the Renault UK Clio Cup but this is a move to the big time for the young talent. Far from contending with being the brother of one of the most famous sportsmen in the world, Nicolas is busy carving his own path, particularly as he’ll become the first disabled driver to compete in the BTCC.

“Whilst I’m aiming to improve as a driver, I’m also hoping to inspire others to strive for their own personal goals, whatever their situation in life,” said the man who lives with the neurological condition Cerebral Palsy. “Anyone can ‘Exceed Expectations’ in one way or another and I hope to prove that when I race alongside not just able-bodied drivers, but the best touring car drivers in the UK.”

It’s not yet known if Lewis Hamilton will be in attendance at Croft to lend his support, but the double World Champion is clearly proud of his younger brother.

“To go from being in a wheelchair, through having a big surgery when he was five years old to be now racing cars against and beating people who have no disability is hugely inspiring. I am excited for him,” noted Lewis in a recent blog for the BBC.

“Obviously, I hope it goes well for him, but it’s ultimately not just about winning, it’s about going out and competing as an equal despite having a disability. What he can do in a car, despite everything he has against him, is pretty special.”

Timetable and ticket information
It’s not only the three headlining BTCC contests to look out for as there will be a plethora of support series to enjoy on a huge weekend programme of motor racing.

Those unable to attend can watch more than eight hours of live coverage on ITV Sport, with the entire race day being broadcast on ITV4 from 11:15 on Sunday.