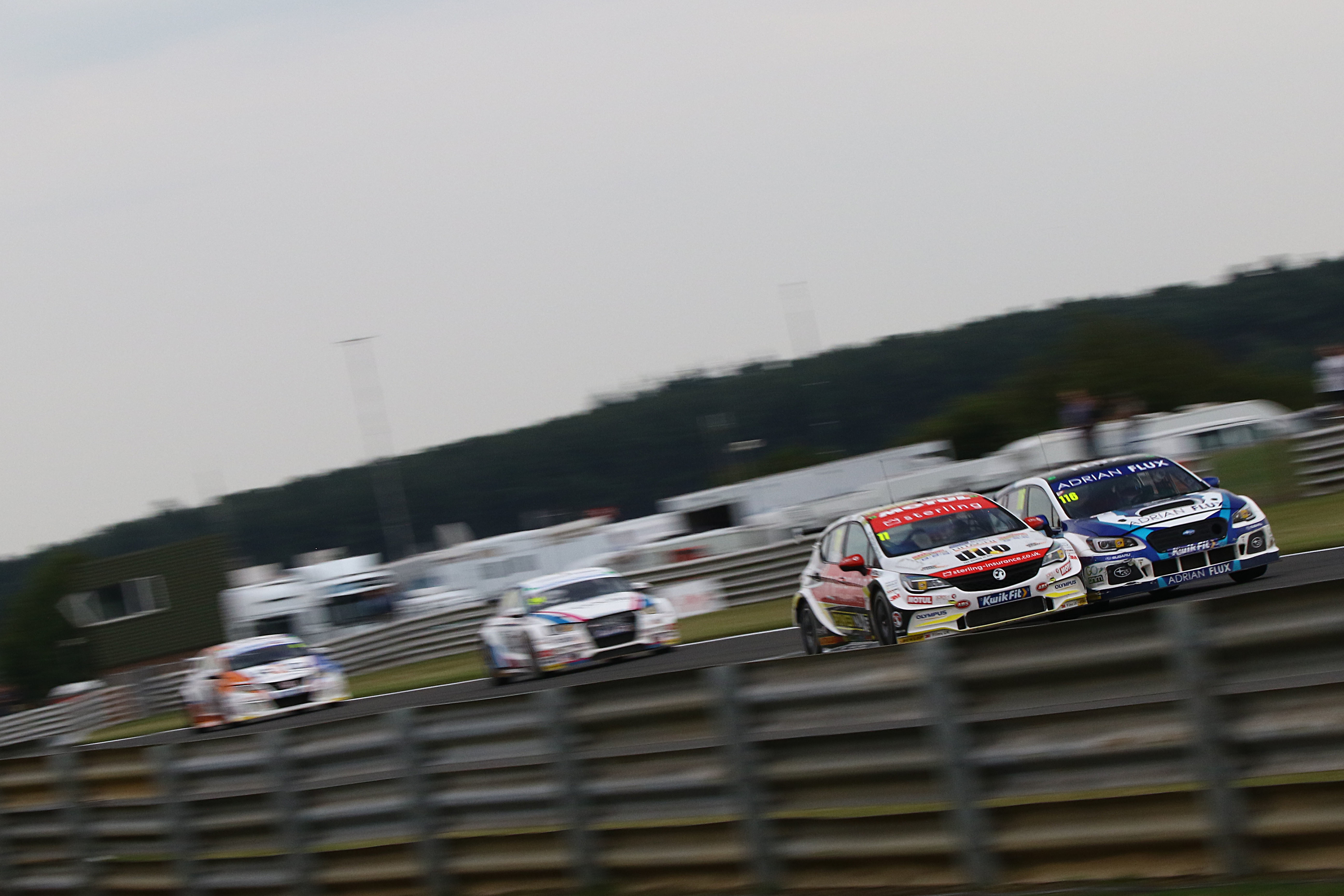 The MPA Creative team is excited to return to Thruxton Circuit next weekend (17/18 August) with the Kwik Fit British Touring Car Championship.

The second visit to the Hampshire circuit of the 2019 BTCC season is sure to be full of action and we are very much looking forward to rolling our sleeves up yet again for another weekend of thrilling racing.

West Surrey Racing’s trio of BMW 330i M Sports have so far proven to be the car to beat this year, as the Bavarian marque has claimed ten victories out of 18 races.

Reigning champion Colin Turkington notched up another consistent performance at Snetterton to pull a further three points clear of nearest rival and stablemate Andrew Jordan, though the chasing pack – spearheaded by Josh Cook in the BTC Racing Honda – is far from out of the equation. The standings’ top six drivers sit within 70 points of one-another. With 67 points on offer at each of the four events to come, there’s plenty of scope for it all to change – and quickly.

Honda machinery has arguably proven to be the most suited to the high-speed sweepers at Britain’s fastest race track having taken victory in 13 of the last 27 rounds there – including via Cook himself back in May.

That said, the BMWs were strong first time around. Jordan capitalised with a pair of victories as the outfit caught everyone on the hop out of the blocks with its trio of new-build 3 Series’ fresh out of the workshop just a week before the curtain-raising event of 2019 at Brands Hatch.

Thruxton’s a favourite of both fans and drivers alike, and a massive crowd descended on the circuit earlier this year. Another huge attendance is expected to bask in the August sunshine, and soak in the thrilling action served up by Britain’s premier motorsport series.

Those unable to make the trip will be able to catch the action on qualifying and race-day, live and exclusively via the championship’s long-term broadcast partners, ITV Sport, with an eight-hour programme of the best motor racing action in the country to be screened live on ITV4 next Sunday. The BTCC is in rude health, illustrated by ITV’s year-on-year live broadcast figures for the championship seeing an 18 percent rise.

One of the stories to emerge at Snetterton, after a summer break which saw teams striving to find every thousandth-of-a-second from their cars and drivers, was the pace of Tom Ingram and his Team Toyota GB with Ginsters Corolla.

The car is new-for-2019, and the first that Speedworks Motorsport has constructed from the ground up to compete in the series. While he had been there-or-thereabouts throughout the first half of the campaign, Ingram had yet to hit the heights he reached in the outgoing Avensis last year on the way to taking the Independent Drivers’ and Teams’ titles.

At Snetterton, though, the team made a major breakthrough. The in-season two-day test at the Norfolk circuit was spent hunting down a cure for a troublesome damping issue which had prevented their Corolla from operating as expected. It was immediately evident at Snetterton that Speedworks’ efforts had borne fruit.

Ingram flew to pole position and followed up with a lights-to-flag win in race one – managing a three-second gap to next-best Dan Cammish.

“I couldn’t keep up and we didn’t have enough in the car,” said Honda’s Cammish, himself a man in good nick. “He had a bit of a quicker package and I could see where he was good – we couldn’t match it. They’ve worked hard, so all credit to them. We’re all working hard, though. That’s just how competitive it is in this championship.”

“We made a massive step forward at the test,” confirmed Ingram post-race. “It was so important for us. The way that the BTCC works over a race weekend, time is so tight and you can’t try the things you’d like to.

“The team have been none-stop trying to get every single last bit out of it. It was better there than the Avensis ever was, and if we’re there already – it’s a real good sign going forward.”

Over the last three race weekends, at Croft, Oulton Park and Snetterton, Andrew Jordan has edged Colin Turkington in points scored by four points. The BMW Pirtek Racing man is striving to overcome an early-season deficit after a disastrous non-score back at Donington Park. He’s keeping parity but the reigning champion has so far been able to keep Jordan at arms’ length.

Jordan sealed a win-double at Thruxton earlier in the year, to bounce back immediately from that Midlands misfortune. Despite reaching the top step twice, he was only able to nibble away at Turkington’s advantage. He will be hoping the dice rolls his way next weekend.

“It’s nip and tuck in the championship between myself and Colin,” said Jordan. “To gain 30 points over four weekends isn’t going to happen easily. If he gets some bad luck somewhere, I need to be there to pick up the points.”

The next in the form-book is Halfords Yuasa Racing’s Dan Cammish. The Honda man has outshone his legendary team-mate, Matt Neal, in his second BTCC campaign and has constructed a title challenge from a string of podium finishes over the last three weekends. The top step has eluded him in 2019 to this point, but the Honda Civic Type R (FK8) is well suited to the pace and poise required at Thruxton. He’ll look to take a bite out of the BMWs over Rounds 19, 20 and 21 on ‘home turf’ for Honda, based just up the road at Swindon.

Rory Butcher is another man looking to fire himself into championship contention. The AmD driver was instrumental in the outfit securing its maiden BTCC Independent Teams’ trophy at Snetterton. He’s also top of the tree in the Independent Drivers’ championship and the Jack Sears Trophy.

Alongside with team-mate Sam Tordoff, the Essex outfit are enjoying their best streak in the BTCC to-date. Its first two victories came via Butcher but both he and Tordoff have combined to propel the AmD Honda squad to the top of the Independent Teams’ running – albeit tied with BTC Racing on points.

Bath-based Josh Cook and team-mate Chris Smiley are the guys steering BTC Racing’s Honda Civic Type Rs into Indy title contention, and following a podium-double at Snetterton, they’ll be looking to follow up with more silverware in Hampshire – especially given Cook took to the top step there just a couple of months ago.

All three BTCC races on Sunday, 18 August alongside the rest of the day’s action will be broadcast live, free-to-air and in high-definition by the series’ longstanding partner ITV, on ITV4, via the ITV Hub and streamed live online at itv.com/btcc. Those in attendance at the circuit can stay in touch with the commentary and live timing from every session, available at btcc.net/live and via the Official BTCC App throughout the weekend.

Advance tickets are available from just £13, with weekend passes with paddock access running to just £42. Saturday grandstand seats are an additional £5. Accompanied children aged 12 and under will be admitted free of charge.

For further information or to buy tickets, see https://thruxtonracing.co.uk/racing/btcc or call 01264 882200 and select Option 1.