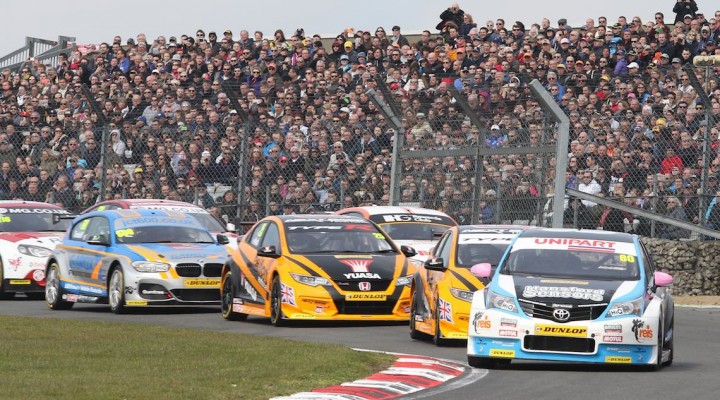 The 2016 Dunlop MSA British Touring Car Championship commenced in fine style at Brands Hatch with a trio of different drivers celebrating victory from the three fast and furious races.

Tom Ingram, Gordon Shedden and Adam Morgan all tasted champagne on the top step of the podium, but it was Matt Neal who left the Kent circuit with the championship lead.

Ingram set a scorching lap record during qualifying on Saturday, taking a maiden pole position in the process, and the 22-year-old duly backed up his pace with an impressive lights-to-flag victory in the season opener.

Reigning champion Shedden inherited the lead and ultimately the win in the second contest, after contact between Ingram and West Surrey Racing’s Rob Collard sent them both spiralling out of contention.

Race three produced another lead change when pole-sitter Sam Tordoff had to give up top spot to the hard charging Morgan. Tordoff and WSR team-mate Jack Goff kept Morgan’s Mercedes honest throughout, but the WIX Racing star held on for his third career victory.

The day kicked off under glorious spring sunshine as tens of thousands of fans flocked to the world famous motor sport venue. The spectators were immediately entertained as Ingram and Speedworks Motorsport’s first ever BTCC victory received rapturous applause from the huge crowd.

While the race was frenetic further down the order, the top three contenders in Ingram, Honda’s Shedden and his team-mate Neal remained steady throughout. A slowing backmarker and a mid-race safety car spell proved to be the only issues for Ingram, but the young charger dealt with both interruptions with consummate ease.

MG’s young duo continued to belie their relative inexperience by finishing fourth and fifth, with debutant Ashley Sutton getting the better of Josh Cook.

The Halfords Yuasa Racing boys improved further in the second bout by scoring Honda’s first one-two of the season, as Shedden headed Neal.

Ingram’s Toyota had maintained the lead off the line while Collard’s BMW blitzed from sixth on the grid into second before the 32 cars reached Paddock Hill Bend for the first time.

Collard immediately set about attacking Ingram and the duo touched at Paddock on the second tour before more forceful contact at Druids sent the BMW into a spin. Ingram continued for half a lap but then slowed with damage, which was caused as a result of the earlier incident.

Honda inherited the top two positions and never looked back while Aron Smith completed the podium order in his VW – the first rostrum for new squad BKR.

Morgan celebrated victory in race three around the 1.2-mile Indy circuit after holding off a near race-long threat from the WSR duo of Tordoff and Goff.

WIX Racing’s Morgan slotted in behind pole-sitter Tordoff and the soft Dunlop SportMaxx tyre-shod Mercedes crawled all over the back of the BMW on the opening lap. Morgan eyed his opportunity on lap two and darted past Tordoff on the run down to Paddock Hill Bend.

The closing stages were tense as Tordoff and Goff hauled their BMWs back towards Morgan’s Mercedes. The Lancashireman kept his powder dry, however, and saw off several attacks to take the win.

Three-time champion Neal may not have won any of the three opening rounds but used all his experience and guile to bag more points than his rivals with strong second, third and fifth-place finishes.

Honda leads the Manufacturers/Constructors’ table from WSR and MG respectively, whilst debutants Subaru are fourth. The Japanese marque produced a hugely impressive effort just to ready its four Levorgs in time for the meeting, and the Team BMR-run squad was rewarded as Jason Plato and Colin Turkington scored points in races two and three respectively.

Next up for the BTCC and for MPA Creative, it’s rounds 4, 5 and 6 of the 2016 Dunlop MSA British Touring Car Championship – to take place at Donington Park on 16/17 April.