BTCC set for another sensational season 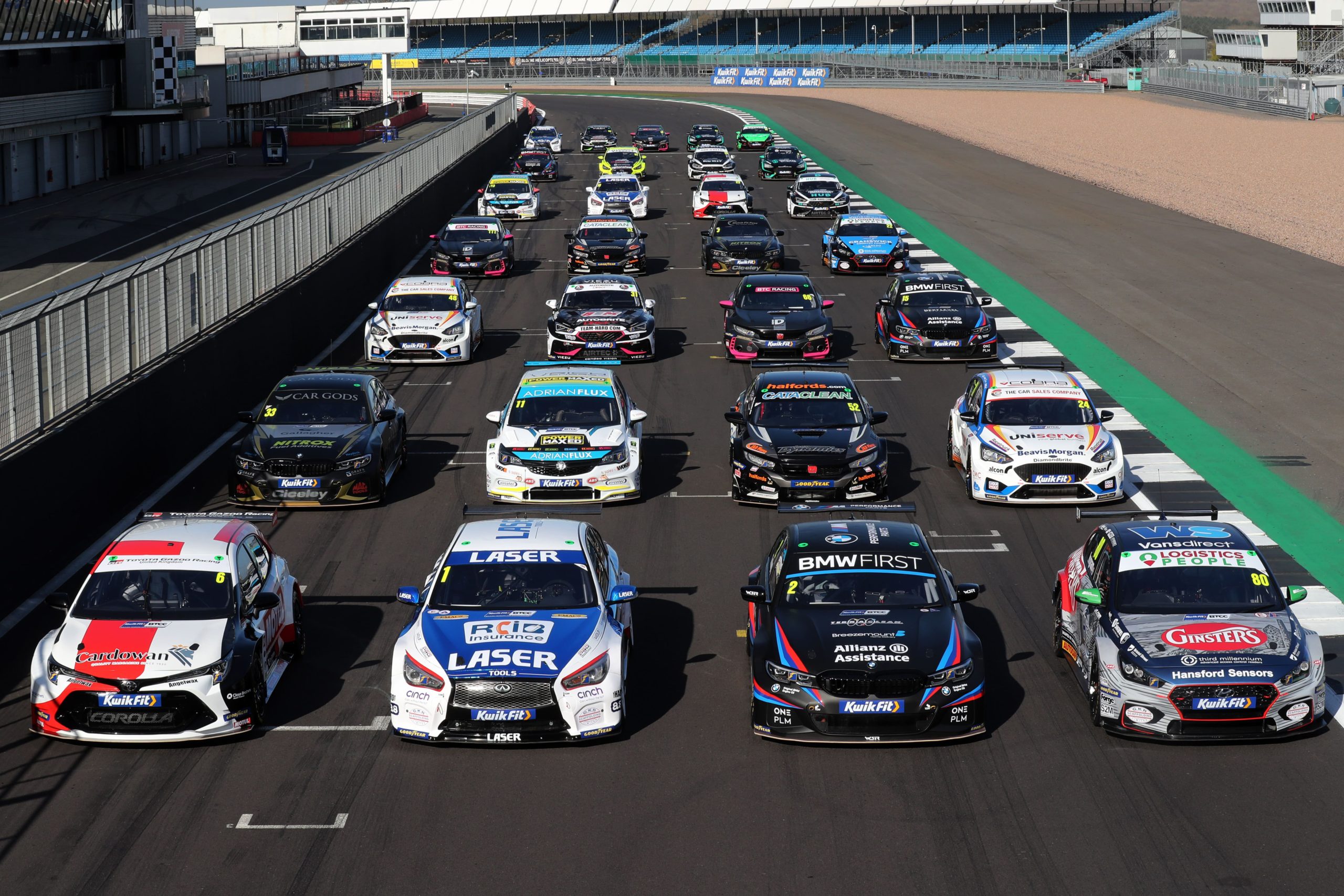 The 2021 Kwik Fit British Touring Car Championship was officially presented at Silverstone today (22 April) as a mouth-watering capacity grid took to the famous circuit during the annual Season Launch event.

A stellar line-up of proven contenders, young challengers and returning champions will battle for British motorsport’s most coveted prize this year, with no fewer than eight of the world’s most recognised vehicle marques represented on the final entry list.

Although the first event of the season is set to take place behind closed doors while the country continues to emerge from the Coronavirus pandemic, the BTCC is looking forward to welcoming back its significant and loyal fanbase thereafter.

Spectators returning trackside from June onwards are undoubtedly in for a treat, as are those watching from home, as the series continues to enjoy its unrivalled live and free-to-air UK television coverage on ITV4.

The highly anticipated 2021 Kwik Fit British Touring Car Championship will comprise 30 races across ten events at eight venues around the UK, with the hugely popular and ultra-fast Thruxton circuit kicking off proceedings on 8/9 May.

Champions versus challengers
Reigning champion Ash Sutton rightly headlines the packed 29-driver grid, but the Laser Tools Racing star has a host of household names snapping at his wheels.

Tin-top legend Jason Plato is back after a one-year hiatus as he looks to add to his two BTCC Drivers’ titles so far, whilst triple champion Gordon Shedden returns to the UK’s premier motorsport series following a three-year sabbatical.

Power Maxed Car Care Racing’s Plato and Halfords Racing with Cataclean’s Shedden may have five championship trophies between them, but Colin Turkington has a record-equalling four all to himself and the Team BMW stalwart will also be looking to win back the crown this season.

It’s not just the glittering list of former champions that will be considered contenders, as a number of young chargers have been fighting at the front for several years…

Former championship runner-up Tom Ingram has swapped Toyota for Hyundai machinery as he joins Ginsters EXCELR8 with TradePriceCars.com, whilst Rory Butcher has taken the vacant seat at Toyota Gazoo Racing UK. Both drivers have multiple race wins between them and both have previously clinched the Independents’ trophy, but they only have eyes on the main prize in 2021.

Ford Focus runners MB Motorsport accelerated by Blue Square (Jake Hill and Ollie Jackson) and Racing with Wera & Photon Group (Sam Osborne and Andy Neate) have joined BMW and Toyota in the race for Manufacturers/Constructors’ honours this year, which will add an exciting dimension to proceedings.

Sutton is still flying the flag for Independent teams at Laser Tools Racing, alongside Scotsman Aiden Moffat and Carl Boardley, making this one of the strongest trios in the entry.

Car Gods with Ciceley Motorsport will fancy its chances for overall and Independents’ success this season, as Adam Morgan and Tom Chilton get their hands on new BMW 330i M Sports.

Plato is joined by the talented Dan Lloyd in the Power Maxed Car Care Racing Vauxhall Astras, whilst Dan Rowbottom completes an all-changed line-up in the Halfords Racing with Cataclean Hondas.

One of the most exciting additions in 2021 will be the newest car on the grid – the Team HARD-built Cupra Leon. Jack Goff and Glynn Geddie pair up for Team HARD. with Autobrite Direct, whilst Aron Taylor-Smith (Team HARD. with HUB Financial Solutions) and Nic Hamilton (ROCKiT Racing with iQuoto Online Trading) complete the promising line-up.

No fewer than 11 new cars have been built and prepared by BTCC teams during the winter, which is testament to the ongoing success, appeal and relevance of the UK’s highest profile and most popular championship.

Away from the on-track action and as is normal in any off-season, Series Organiser TOCA has ratified a number of minor amendments to its regulations following consultation with the championship’s teams.

After the successful trial of the ‘Top Ten Showdown’ qualifying session at Snetterton during the 2020 Kwik Fit British Touring Car Championship, the same format will be replicated at Donington Park, Snetterton and Silverstone this season.

The Goodyear ‘Option’ tyre will be phased back in at four of the ten scheduled events following a hiatus during the delayed 2020 campaign, whilst it was also agreed that maximum success ballast will be increased back to 75 kilograms, given that cars now demonstrably carry their extra weight far more capably and competitively than before.

It will also be another important year of development for the BTCC’s Hybrid project, with Hybrid power being introduced into the series in 2022. The system and related components began its very comprehensive test and development programme last year and continues with more intensive on-track testing throughout 2021.

The full 2021 Kwik Fit British Touring Car Championship field will contest the only official pre-season test session at Silverstone today (22 April) before the serious business gets underway in just over two weeks’ time at Thruxton.

Alan Gow, BTCC Chief Executive, said: “It’s always an exciting and proud day when we officially present our packed grid of cars and stars at our annual Season Launch event.

“To display such a high-quality capacity field – despite all the challenges faced over the last 12 months – is testament to the huge enthusiasm, determination and professionalism of everyone involved.

“The number of newly-built cars over the off-season is also unprecedented in recent times and only goes to further highlight the BTCC’s rude health, our ever-increasing appeal and the massive commitment shown by all the teams.

“Our loyal partners such as Kwik Fit, Goodyear and ITV – among many others – also play an enormous part in the success of the series as they continue to maximise their involvement in Britain’s biggest and best motorsport championship.

“Obviously it was a real wrench to have competed without the tens of thousands of spectators lining the banks and filling the grandstands at each event last season, so we simply cannot wait to welcome everyone back. The BTCC is just not the same without its fans trackside and no doubt the atmosphere they bring will add another fantastic ingredient to the season ahead.

“Those unable to follow trackside will of course still benefit from the extensive live, free-to-air UK coverage on ITV4, as well as our multiple platform live-streaming and catch-up options, meaning you won’t have to miss a moment of the action.

“Everyone is incredibly excited about what is sure to be a sensational 2021 Kwik Fit British Touring Car Championship – bring it on!”