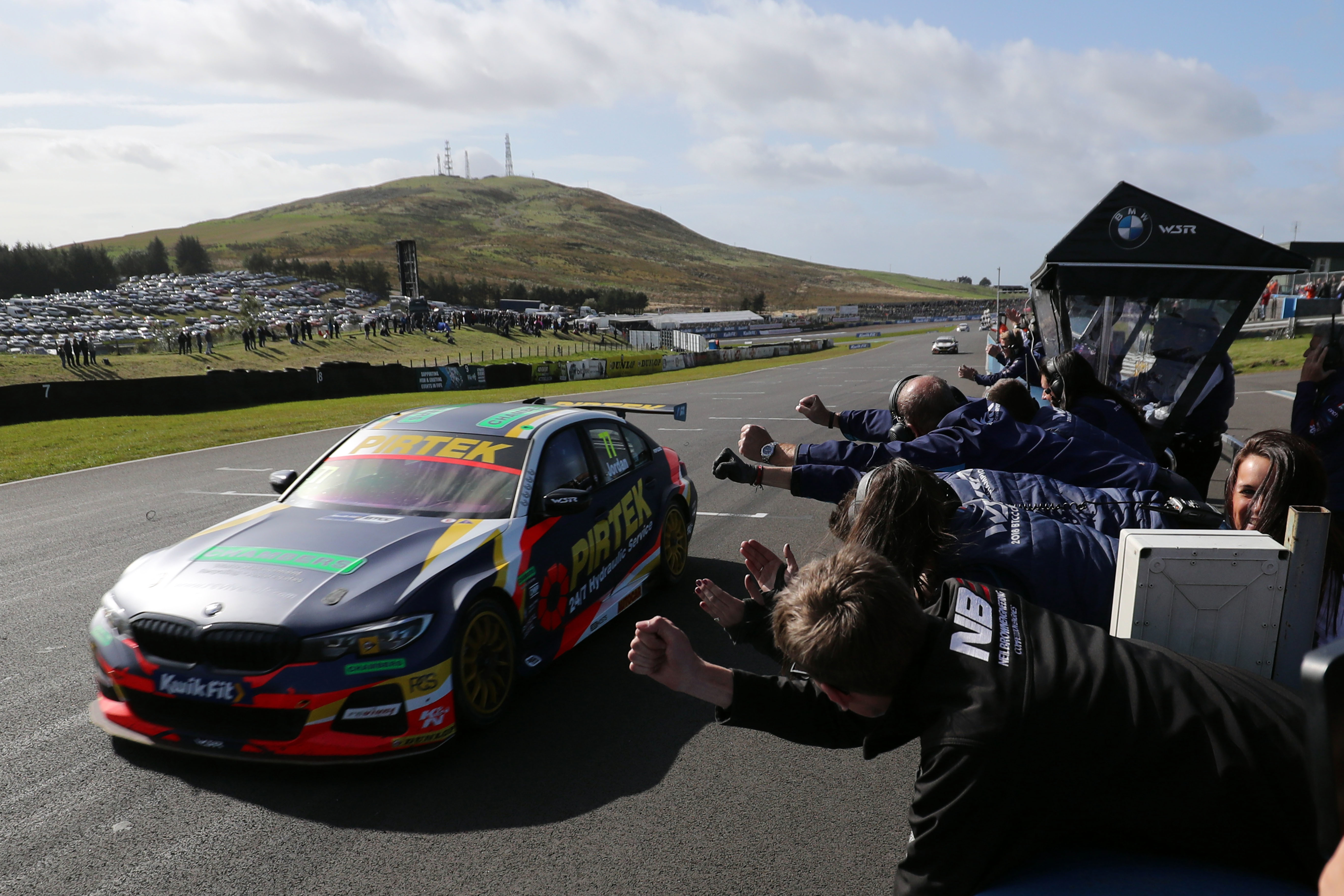 The pendulum swung one way and then another in the race for the 2019 Kwik Fit British Touring Car Championship, as BMW’s Colin Turkington and Andrew Jordan both found trouble on a dramatic day of racing at Knockhill.

Rory Butcher and Jake Hill each took a victory, with Jordan winning the other as he significantly closed the overall points gap to stablemate Turkington.

Halfords Yuasa Racing’s Dan Cammish claimed two podiums around the tight and twisty 1.27-mile circuit – his tenth and 11th rostrums of the season – as he too strengthened his own championship chances.

The day began with Scotsman Butcher getting the home crowd on its collective feet as the pole-sitter reclaimed the lead on the final lap to win an exciting opener.

The Cobra Sport AmD AutoAid/RCIB Insurance driver fended off the attentions from BMW Pirtek Racing’s Jordan for almost the entire 27-lap contest, before the Honda Civic Type R clipped the kerbs at the final hairpin on the penultimate lap.

Butcher, already struggling to put power down with a lost gear, was doubly sluggish out of the the hairpin as a result, compromising his momentum up the hill and across the start/finish line as Jordan stormed around the outside to briefly claim first and a potentially important championship point for leading a lap.

Jordan’s joy was short lived, however, as the 3 Series carried too much speed into Duffus Dip on the final tour and the 2013 champion briefly ran off track, giving Butcher the opportunity he needed to nip back by and into the lead.

The roar from the partizan crowd could be heard above the engine noise and Butcher held firm until the finish to claim his third victory of the season.

Despite the drama, Jordan would finish the race where he started, immediately reducing the points deficit to Turkington in the process, who himself had his own race long tussle with Cammish and Tom Chilton for the final place on the rostrum.

The title race was then blown wide open as Jordan claimed victory in race two, whilst Turkington was forced out of contention during a podium fight with home hero Butcher.

Butcher lost the lead off the line to the fast starting 3 Series of Jordan and he was immediately under further pressure from Halfords Yuasa Racing’s Cammish.

Cammish – running the Dunlop Sport Maxx soft tyre – was able to scramble by Butcher’s AmD-run Honda on lap six, seemingly bringing Turkington along with him. Team BMW’s Turkington briefly took third from Butcher across the start/finish line but the duo duelled it out through the first few corners of the next lap.

Butcher nudged his Honda Civic Type R down the inside of the #1 BMW on the entry to McIntyres and inevitable contact followed as Turkington turned in.

The 3 Series was tipped into a gravel-bound spin that sent Turkington tumbling down the order, whilst Butcher was able to continue relatively unscathed.

Jordan, Cammish and Butcher scampered off to complete the podium positions as Turkington recovered to finish 19th.

Butcher received a five-place grid penalty for his part in the Turkington incident, as the now seemingly increasing number of title contenders prepared for the final highland fling in Scotland.

That bout belonged to TradePriceCars.com’s Hill, who took his first BTCC win with a commanding lights-to-flag performance. Hill’s success was also the first for the Audi S3 in the BTCC, as the Kent driver became the tenth different race winner in the 2019 season so far.

Hill kept BTC Racing’s Josh Cook at arms length throughout, whilst Mac Tools with Ciceley Racing’s Adam Morgan completed the podium positions after he got the better of Sterling Insurance with Power Maxed Racing’s Jason Plato.

The championship drama struck Jordan on this occasion as he was forced into retirement whilst trying to avoid the spinning Subaru Levorg of Senna Proctor.

Turkington recovered brilliantly from his race two woe to take tenth in the finale, leaving him with a ten point advantage in the standings over Jordan, with Cammish only a point further back.

Rounds 25, 26 and 27 of the Kwik Fit British Touring Car Championship will take place at Silverstone on 28/29 September, before the final event of the season commences at Brands Hatch next month.