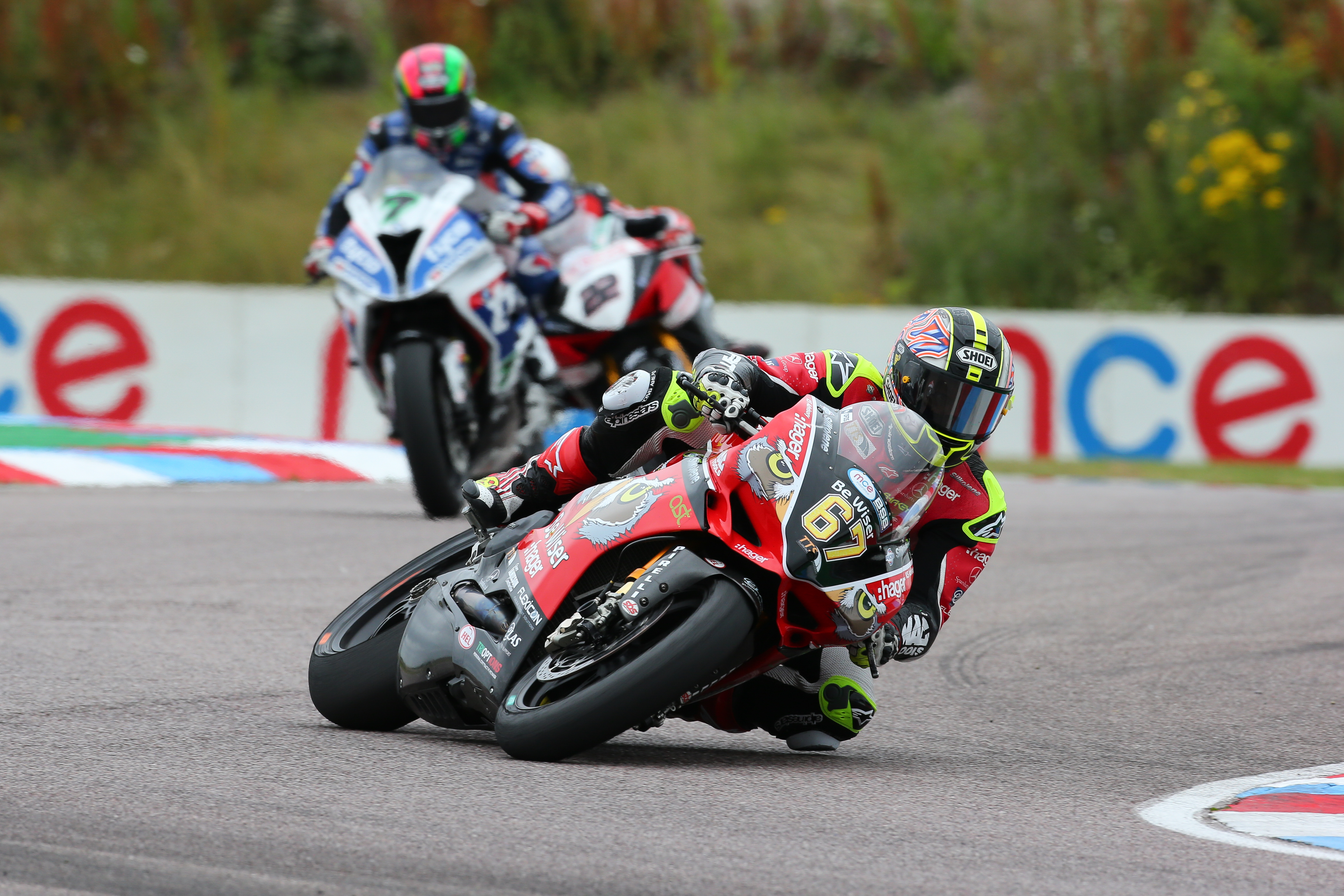 A bumper crowd flooded into Thruxton Circuit today (24 July) for the sixth round of the 2016 MCE Insurance British Superbike Championship (BSB), and they were rewarded with a spellbinding spectacle of high-octane two-wheeled thrills.

As the sun continued to shine, fans flocked to the popular Hampshire track – the quickest in the country – expecting to be entertained and true to form, Thruxton did not disappoint as its fast, flowing nature encouraged stunning slipstreaming scraps right the way through the field.

After storming to a commanding pole position in qualifying, championship leader Shane ‘Shakey’ Byrne was similarly a force to be reckoned with in race one – although it was not made easy for him. After pulling clear of his pursuers in the opening laps, a red flag stoppage for an accident back in the pack gave his competitors the opportunity to redress the balance – and Michael Laverty took full advantage.

The Tyco BMW rider got the hole-shot at the re-start, but after two laps, Byrne was back in front and thereafter went unchallenged all the way to the chequered flag as he notched up his fourth victory of the campaign.

“I worked quite hard at the first start to establish a decent lead, after which I tried to manage my tyres and look after everything,” ‘Shakey’ reflected. “Michael got away slightly better than me at the re-start, but once I passed him, I got my head down – although maybe I pushed a little too much, as it seemed to punish my tyres and the last couple of laps got a bit sketchy!”

Laverty held on to secure the runner-up spoils ahead of Quattro Plant Teccare Kawasaki rider Luke Mossey, who snared his second podium of the year.

Behind them, a freight train of riders delighted spectators as they enthusiastically exchanged positions. Local lad Tommy Bridewell (Bennetts Suzuki) dropped down the order early on but recovered to finish fourth ahead of ex-MotoGP ace James Ellison – an impressive performance from the JG Speedfit Kawasaki star, who had begun all the way down in 23rd on the grid – and Honda Racing’s Jason O’Halloran.

The onset of rain delayed the start of race two, and when the action did get underway, Byrne’s dominance was swiftly undone by gear lever problems that forced the Be Wiser Ducati rider out of contention – and proved to be the catalyst for a palpitating scrap for supremacy between Laverty, O’Halloran and Haslam, the latter clearly keen to make hay with his chief rival in trouble.

After duelling it out over several laps, Laverty eventually broke away from O’Halloran to take his first victory since the season curtain-raiser back in April. Despite becoming increasingly ragged as the laps ticked down, the Honda man held on for second, whilst Byrne’s rookie team-mate Glenn Irwin got the better of Haslam late on to clinch a well-deserved breakthrough BSB rostrum. Mossey, Haslam and Peter Hickman (JG Speedfit Kawasaki) completed the top six.

“Coming here, we knew we needed to get back into Showdown contention,” Laverty mused. “We’ve been fast enough to fight for the podium and race wins everywhere this year, but we’ve just been very unlucky, so it’s nice to get a double podium today around a circuit that isn’t traditionally the strongest for our bike.

“‘Shakey’ has shown awesome pace all weekend – after qualifying, I joked that they may as well give him the trophies there and then! It was fantastic to even get close to him, and the team has done a great job. I had to ride patiently this afternoon which is not easy to do, but it worked a treat. I’m chuffed with what we’ve achieved!”

There was local success in the support categories, finally, with Andover’s Jake Archer roaring to the rostrum in the HEL Performance British Motostar Championship and Leon Morris from Stockbridge tallying a victory and runner-up finish in the Ducati TriOptions Cup to remain firmly in the hunt for the coveted crown.