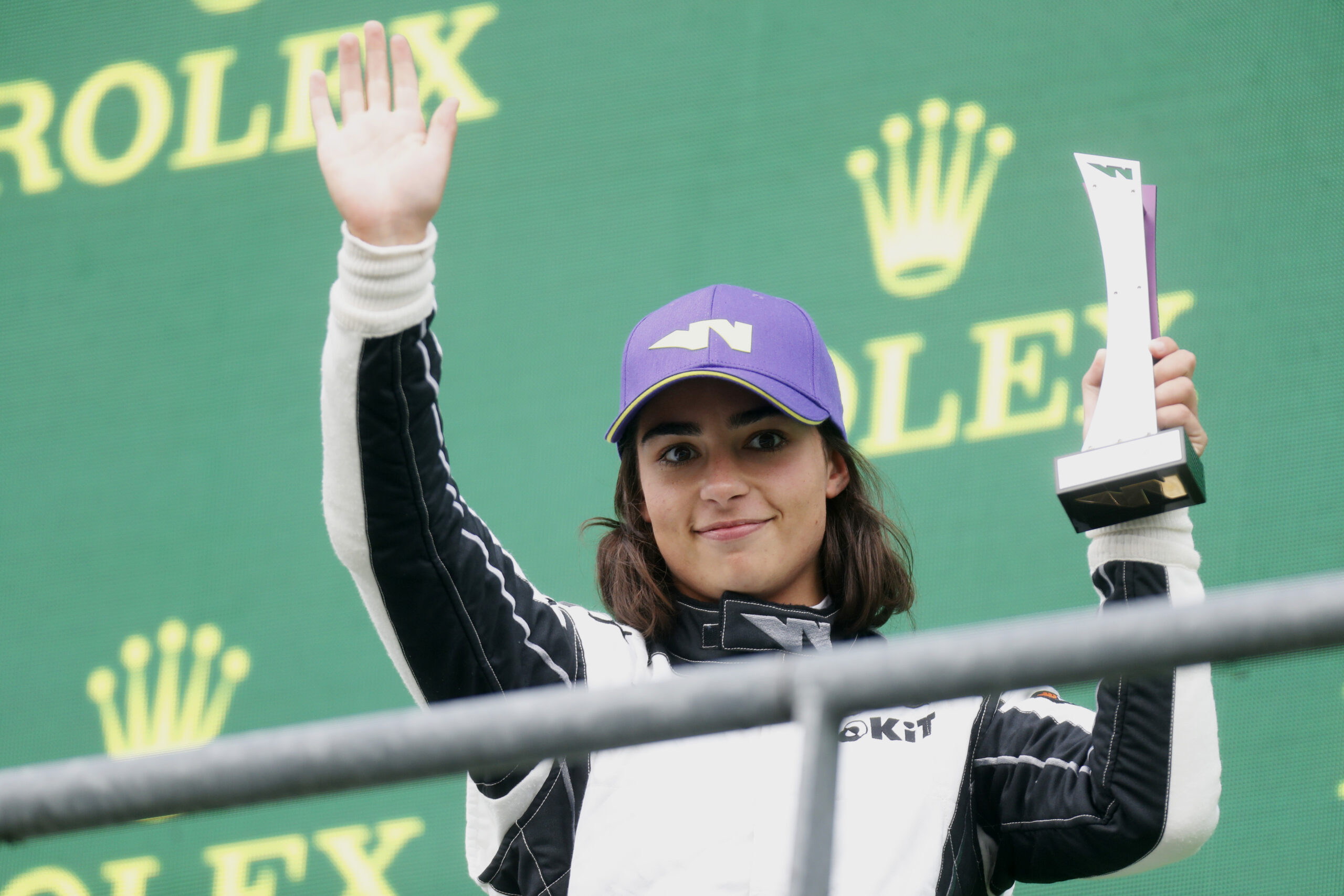 The fifth instalment of the 2021 W Series championship got underway at Spa-Francorchamps today (28 August) in changeable conditions. Jamie Chadwick took a fourth podium of the season at the iconic Belgian circuit while Bruna Tomaselli brought it home in 15th.

Due to a waterlogged track, the race would start under the Safety Car to aid in creating a drying line for the competitors, SC driver Bernd Mayländer peeled off into the pits with 16 minutes on the clock remaining.

Chadwick timed the start to perfection opening up a substantial advantage into turn one. The 2019 champion would go on to extend that gap to 2.6 seconds by the end of the first lap and maintain the margin for several laps.

Team-mate Tomaselli, meanwhile, defended masterfully from Abbie Eaton at Les Combes as the duo engaged in a titanic battle at the fringes of the points-paying positions.

With eight minutes on the clock, Finland’s Emma Kimiläinen moved past Alice Powell into second and began hunting down Chadwick. Despite a valiant defence, the 23-year-old was unable to hold back the advances of the Ecurie W driver and inevitably conceded the race lead.

In the closing stages of the race Tomaselli spun out of contention tumbling down the order, the Brazilian rookie would come across the line in 15th place.

With title rival Powell in fourth and Chadwick picking up her fourth podium of the season, the reigning champion extended her championship lead to a seven-point advantage heading into the final three rounds of the season.

W Series now turns its attention to Zandvoort in the Netherlands (3-4 September) in just one week’s time, followed by the Circuit of the Americas (22-23 October) and the season finale at Autódromo Hermanos Rodríguez (29-30 October).

“I had no answer for Emma [Kimiläinen] today –  credit to her for such an impressive job. She came past and was just using better parts of the track and turning the tyres on better than I was.

“I’m still delighted with P2 and happy to come away unscathed having had such challenging conditions this weekend. When we were behind the safety car it seemed fine but as soon as it came in it got quite tricky. Overall, I think we managed it well and I’m looking ahead to next weekend in Zandvoort.”

“I’m disappointed with the result today but in these kinds of conditions you never really know what to expect. I felt like I had good pace and was battling with Abbie [Eaton] before the spin which ultimately decided the outcome of my race.

“Congratulations to Jamie [Chadwick] and the team on another podium – I hope I can add to that tally in the remaining three races of the season.”

“To come away from Spa having extended the championship lead is a brilliant achievement. Emma did a great job today but Jamie still came away with second place and that’s great news for the points battle with Alice [Powell].

“Bruna [Tomaselli] had a difficult day out there today – the conditions have been crazy at Spa this weekend and they can catch any driver out at any time. I know she’ll bounce back and be back at the sharp end at Zandvoort next weekend.”