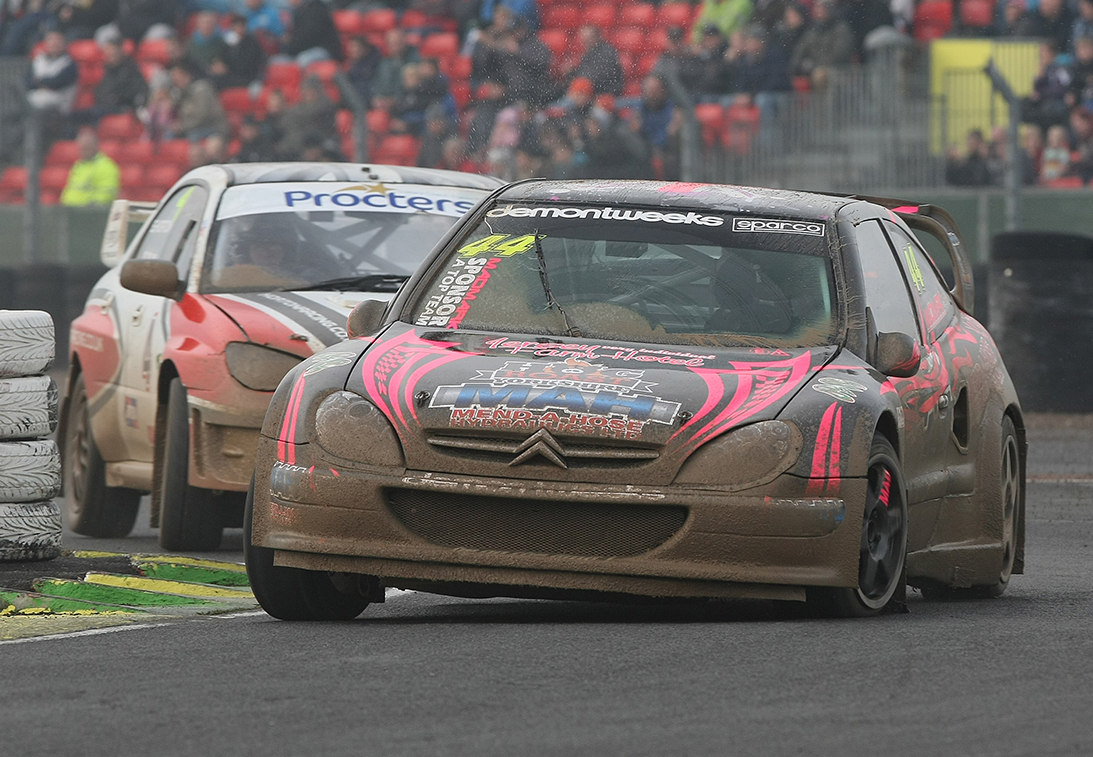 Croft Circuit is psyching itself up for a feast of flat-out, mud-slinging action next weekend (Sunday, 15 November), as some of the most talented drivers in Europe speed into the popular North Yorkshire venue for the eagerly-anticipated finale to the 2015 Autosport International BTRDA National Rallycross Championship.

Rallycross is a captivating blend of circuit racing and rallying, and a monster field of almost 80 flame-spitting cars will take to the asphalt and gravel at Croft for more than 40 races over the course of the Darlington & District Motor Club (DDMC) organised event.

A high calibre of competitors includes international flavour in the form of leading European drivers from Norway and Belgium as well as some of the top homegrown stars – a number of local heroes amongst them.

No fewer than 11 champions will be kicking up the dust and dirt, with Barnard Castle hotelier ‘Mad’ Mark Watson – three times a British Open Rallycross title-winner – a surefire crowd-pleaser behind the wheel of his striking 550bhp Citroën Xsara T16 Supercar.

Add into the mix recently-crowned 2015 winners David Bell and Tomasz Wielgosz, the ultra-experienced Mark Flaherty and 2014 British Super 1600 Champion Jack Thorne – making his debut in a Ford Focus T16 – and all the ingredients are firmly in place for a spectacular day of high-octane entertainment.

In the Production Class, fans will be able to cheer on ex-Stockhatch Champion Martin Peters (Ingleby Barwick), John Gaskin (Middlesbrough) and Connor Hook (Newcastle), whilst Stokesley’s Ian Horn will campaign his trusty Vauxhall Nova in the Historic races as father and daughter Marty and Jennie Hawkes (Stockton-on-Tees) duel it out in BMW Minis.

With many titles still up for grabs and double points on offer, the action will get underway at 09:00 on Sunday, 15 November and promises to be fast and furious throughout. Croft Circuit Manager Mike Cantelo is confident it will be an unmissable event.

“It’s always a pleasure to host the Autosport International BTRDA National Rallycross Championship,” he enthused. “Being the season finale, there is inevitably a bit of an ‘end-of-term’ feeling to proceedings, with competitors throwing caution to the wind in the pursuit of title glory.

“It’s a fantastic value family day out, with more than 40 races guaranteeing plenty of bang for your buck and something for everyone. The cars are sensational and the drivers really know how to wring their necks. It’s fast and frantic – and phenomenal fun!”

Tickets are available for just £8 in advance (until Tuesday, 10 November) or £10 on the gate, with accompanied children aged 15 and under admitted free.

For further information or to find out more about any of Croft’s race meetings or driving experiences, see http://www.croftcircuit.co.uk/ or call 01325 721815.