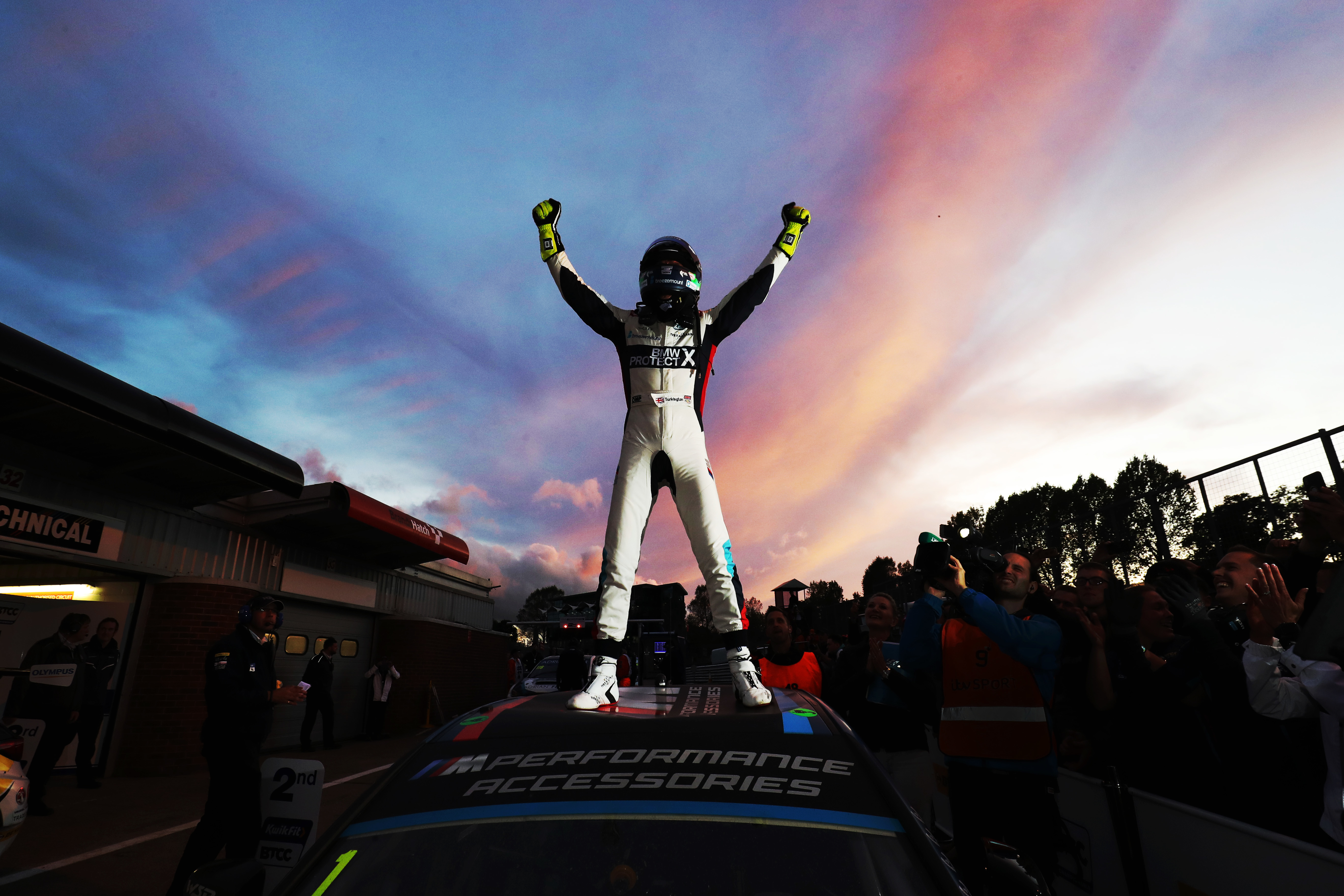 Team BMW’s Colin Turkington was crowned a record-equalling four-time BTCC champion in the most dramatic of circumstances after an unforgettable finale at Brands Hatch earlier today (13 October).

Halfords Yuasa Racing’s Dan Cammish kicked off proceedings in superb style by claiming the most important victory of his BTCC career to-date, before Adrian Flux Subaru Racing’s Ash Sutton scored his first win of the season.

The 30th and final round of the 2019 Kwik Fit British Touring Car Championship will live long in the memory with Sterling Insurance with Power Maxed Racing’s Jason Plato winning the race – his first of the year – whilst the fight for the title went down to the wire.

Cammish would face heartbreak with around four miles of the season remaining, whilst Turkington scythed his way from 25th on the grid to claim a sixth-place finish, ensuring that he leapfrogged Cammish by just two points in the overall standings.

Honda man Cammish came into the weekend with it all to do – 16 points in arrears to Turkington – and his task seemed even harder when his BMW rival dominated qualifying on Saturday.

Andrew Jordan, Josh Cook and Tom Ingram completed the quintet of drivers with a chance of winning the championship coming into the final weekend, but five soon became three after a frenetic opener at the famous Kent circuit.

Cammish surged from 12th to first as intensifying rain helped to produce one of the most exciting races of 2019.

Pole-sitter Turkington lost the lead off the line to Sutton’s Subaru and the pair began an intriguing battle for the lead in the early stages. Turkington’s BMW 3 Series squeezed back by at Druids a few tours later and the reigning champion was now holding a 28-point advantage in the live standings.

All that was to change, however, when Matt Simpson’s Honda went off at Paddock Hill Bend, bringing out the safety car.

Rory Butcher grabbed the lead at the restart in his AmD-run Honda, as the rear-wheel drive BMWs and Subarus struggled in greasy conditions.

Cammish was scything his way through the order as the handling of the Honda Civic Type R proved to be the standout contender in changeable weather, and he soon disposed of BMW Pirtek Racing’s Jordan. Sutton and Turkington were next to be pushed down the order by Cammish and the moment of truth followed on lap 16.

Race leader Butcher held the inside line through Paddock Hill Bend but Cammish hauled his Honda around the outside at one of the most daunting corners in the world. The Yorkshireman emerged in the lead and never looked back.

Matt Neal – having switched to Dunlop BluResponse wet tyres during the earlier safety car period – made a number of moves on the final lap, bringing Tom Chilton’s Motorbase-run Ford Focus through with him. The experienced duo eventually completed the podium, further relegating BMW’s title contenders in the process.

Things improved even further for Cammish when he moved to the summit of the overall standings with just one race of the campaign remaining.

Cammish led race two from pole position but immediately came under attack from the fast starting BMW of Turkington, after he had blasted through the order from fifth on the grid.

Honda’s Neal fought back from third as they ran through Graham Hill Bend for the first time and contact was made with Turkington’s 3 Series, spinning the latter down the order. Turkington immediately pitted to take a gamble on slick tyres, a decision that ultimately failed to pay off, meaning the incident with Neal handed Cammish the championship lead.

The wet/dry contest eventually went the way of Sutton as he made impressive moves past both manufacturer-backed Hondas, whilst Jordan kept his title hopes alive in second with Cammish settling for third.

The final race of the year belonged to BTCC legend Plato as he grabbed a first victory in nearly two years, a result that has been on the cards for much of the season.

Plato was able to get by early leader Stephen Jelley, before the Vauxhall Astra driver pulled away to take a comfortable victory from Cobra Sport AmD AutoAid/RCIB Insurance’s Rory Butcher and Adrian Flux Subaru Racing’s Sutton, but it was all eyes on the battles behind.

Turkington – starting the race in 25th and eight points behind then standings leader Cammish – ripped through the order from the outset, making up ten places on the opening lap alone. The #1 BMW was soon inside the top ten, just behind the similarly charging Toyota of Tom Ingram, and the duo had swarmed up behind Cammish’s Honda Civic Type R.

Having nipped past Ingram’s Toyota Corolla, Turkington then squeezed by Halfords Yuasa Racing’s Cammish at Druids with four laps to go.

Whilst Turkington was now reducing the points deficit, Cammish was still in command of the overall standings lead knowing that eighth position was good enough for a maiden BTCC title.

With seemingly no end to the drama, Cammish suffered heartache with just a lap and a half of the campaign remaining, having previously been the only driver to have completed every single racing lap of the season so far.

As Cammish sped towards Hawthorn Bend – his brake discs already glowing – the #27 Honda suffered with brake failure and continued straight on and into the barrier at one of the fastest corners on the circuit.

In the blink of an eye, Cammish’s championship dreams were over and Turkington’s despair had turned to ecstasy, the Northern Irishman eventually passing the chequered flag to equal Andy Rouse’s record of winning four British Touring Car Championships.

Jordan and Cammish eventually ended up on the same number of points, just two behind champion Turkington.

The Kwik Fit British Touring Car Championship will return in 2020, again comprising of 30 races across ten race weekends. In a shake-up to the calendar, Donington Park will host the opening event on 28/29 March.