COLIN TURKINGTON DOES THE DOUBLE AT DONINGTON PARK 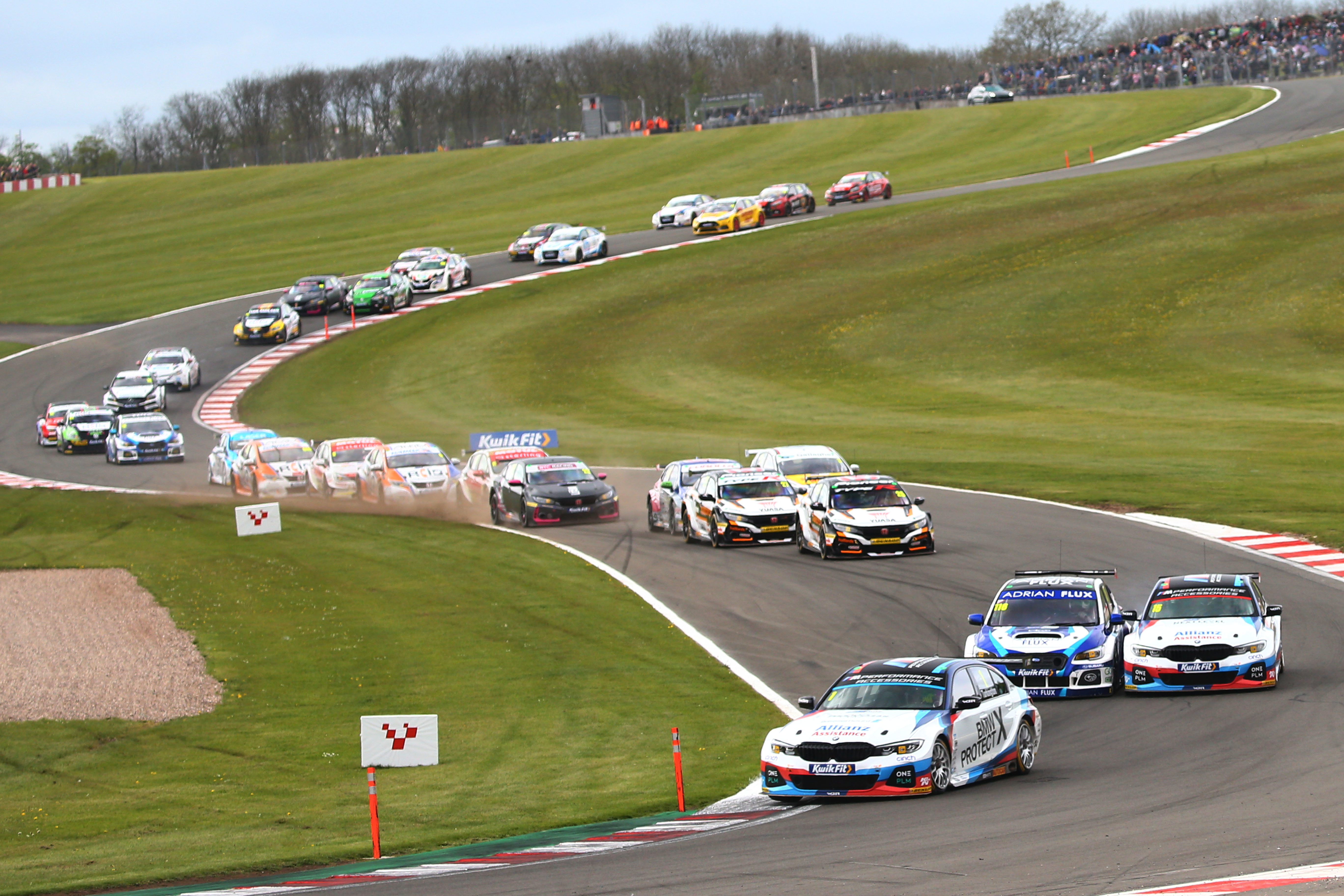 The opening race was action packed at the East Midlands circuit, and the second bout provided its fair share of incident too, but it was Turkington out front in both contests.

Turkington converted his first BTCC pole position in over two years into a relatively comfortable race one victory as the drama commenced behind him.

A multi-car accident on lap one led to several retirements and heavy damage to a number of cars as Andrew Jordan’s BMW slid sideways following contact on the exit of the Old Hairpin. The Mercedes of Adam Morgan had nowhere to go – making contact with Jordan’s BMW – while Ollie Jackson’s Ford, Matt Simpson’s Honda and Jake Hill’s Audi also crashed out of the action.

Jordan was taken to hospital as a precaution but the incident caused so much damage to his BMW 3 Series that the 2013 champion was unable to take part for the remainder of the day.

Turkington had to contend with a further two safety car periods in the next race as the action packed weekend continued. The triple BTCC champion took to the challenge with consummate ease as he scampered off into the distance on each occasion.

Halfords Yuasa Racing’s Matt Neal – quietly going about his business on an otherwise dramatic day – made a great move by Sutton on lap 17 of 19 to take second place away from the Subaru star.

Ingram then scored an emotional first win in the all-new Team Toyota GB with Ginsters Corolla in the final race, as more than 4,500 Toyota members and their families watched on.

Sutton’s two podiums moved him to the head of the overall Drivers’ standings, although just six points cover the top five drivers with Cook, Turkington, Chilton and Butcher following closely behind.

Honda top the Manufacturers’ order whilst Team BMW lead the Teams’ table. Tom Chilton is the man to beat in the Independent Drivers’ field whilst BTC Racing currently lead the Independent Teams’. Rory Butcher extended his advantage in the Jack Sears Trophy.

The Kwik Fit British Touring Car Championship now moves on to Thruxton in Hampshire in three weeks’ time (17/18 May).

Colin Turkington said: “What a start to the season compared to last year. We’ve seen this before; track position counts and if you can get out front you’ve got half a chance. I won the race by managing the safety car periods and kept Ash (Sutton) half a length back. I can’t say enough about this team. That’s three wins already for the new BMW 3 Series this season. It’s a big pat on the back for the whole team.”

Tom Ingram said: “It’s an incredibly special moment. What a weekend to do it on, in our now adopted home race. I can’t tell you the pride we’ll hold in this tonight. There’s been so much hard work that’s gone into this. To be able to do it in front of Toyota, and 4,500 supporters from the factory is just incredible. It’s doubly special for me as I lost my grandma in the week. It’s extra special for her. That’s for nanny.”

Ash Sutton said: “It’s great to be leading the standings and quite unexpected to be honest. I knew I didn’t have the pace to just sit there. As soon as Matt (Neal) got through I wasn’t going to make it too difficult. I couldn’t match his pace with the ballast. The focus was on keeping Tom (Chilton) behind me. We haven’t been in this position before, so I’m just going to take it as it comes. Brands Hatch, Donington and Thruxton are literally about collecting points.”

An appeal for an incident involving Rob Collard and Andrew Jordan is to be heard at Thruxton, due to the latter’s enforced absence