CONTENDERS CLASH AS TURKINGTON RETURNS TO THE TOP 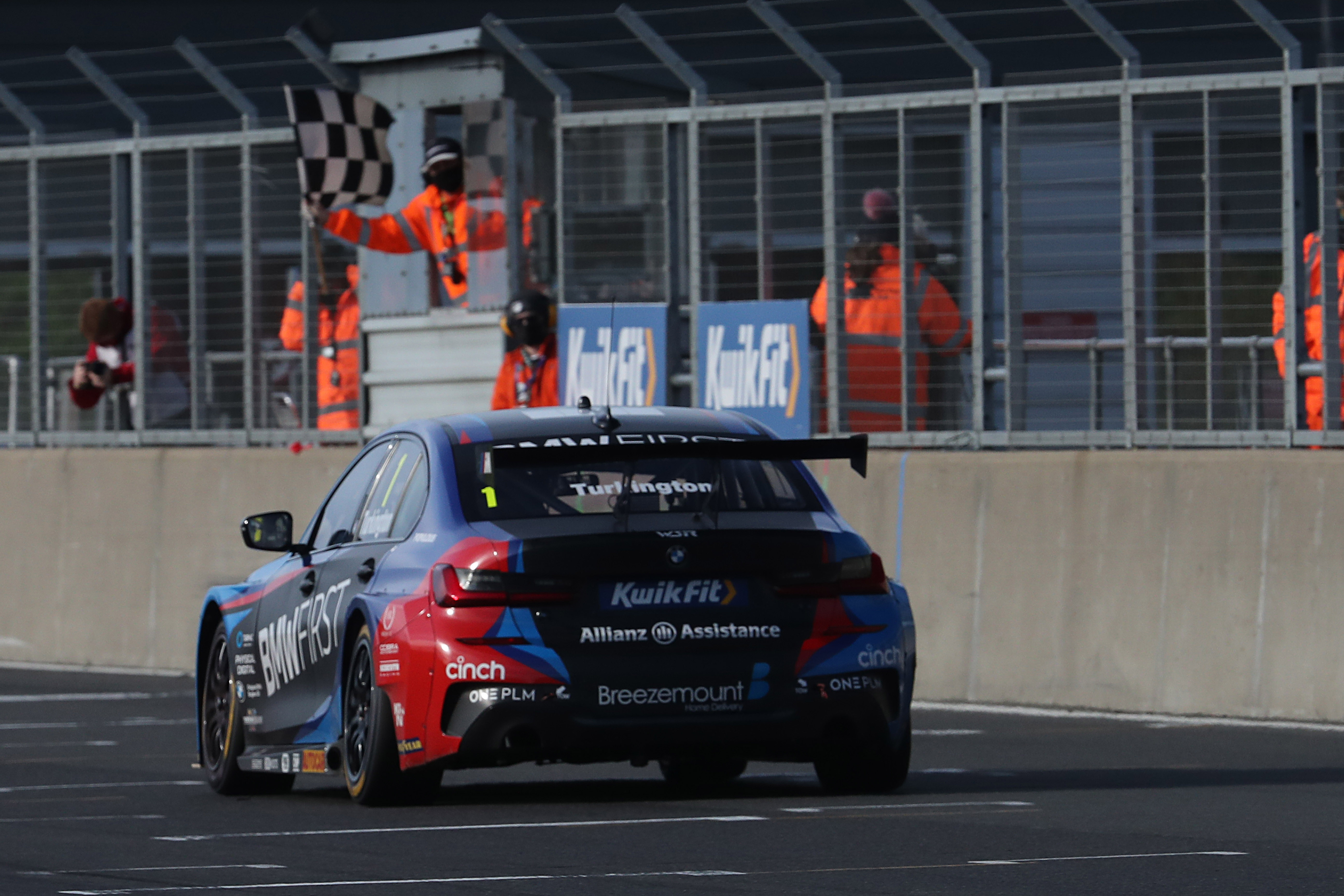 Team BMW’s Colin Turkington enjoyed one of the best weekends of his illustrious BTCC career as a double victory at Snetterton today (25 October) vaulted him back to the summit of the standings.

The Northern Irishman grabbed pole position in the all-new ‘Top Ten Showdown’ on Saturday afternoon and duly converted that into two commanding wins on race day.

Turkington followed that up with a podium in the final bout as Rory Butcher and Tom Ingram clashed, impacting on their respective championship challenges.

The morning action commenced with Turkington securing a lights-to-flag victory despite the early attentions of Toyota rival Ingram.

Turkington’s 3 Series blasted away from the line with what looked to be one of the best launches of the season so far, as Toyota Gazoo Racing UK with Ginsters’ Ingram breezed by the sluggish-starting MB Motorsport accelerated by Blue Square Honda of Jake Hill.

Ingram’s Toyota Corolla went side-by-side with the #1 machine around the outside at Agostini on lap one, but Turkington cleverly squeezed Ingram on the exit of the turn, bringing Hill back into the battle. Hill scythed by Ingram but then ran wide through the next left-hander at Hamilton and Ingram was back into second.

It wasn’t the last time that the pair would switch positions as Turkington set about scampering away from the fight. Hill made a committed move on Ingram in the latter stages at Wilson, and Ingram’s Toyota was tipped into a half-spin. That allowed Hill through, but the MB Motorsport man subsequently chose to relinquish the position.

So Turkington, Ingram and Hill were confirmed in the podium positions but there was another scrapping trio behind them with Butcher eventually getting the better of two of his fellow title contenders – Laser Tools Racing’s Ash Sutton and Halfords Yuasa Racing’s Dan Cammish.

The top five in the overall Drivers’ standings occupied the top five positions for the majority of race two, with the only change coming during a last lap shoot-out following a late safety car period.

The battle simmered rather than reaching boiling point as Turkington produced a repeat victory from Ingram, although the latter did well to hang on for second.

Motorbase Performance’s Butcher nibbled at Ingram’s Toyota Corolla several times, with a significant effort made on the final lap. Butcher out-braked himself at Wilson – leading to contact – which enabled Sutton’s Infiniti Q50 to join the fray. Ingram fended them off as Sutton slipped into third, while Butcher fell into the clutches of Cammish.

It was Butcher’s turn to take a hit at the final turn as Cammish’s Honda Civic Type R slid into the Ford Focus through Murrays. Cammish lost out, however, as Hill pipped the Halfords Yuasa Racing car to the line by just 0.047s – breaking the race-long monopoly of the top five contenders.

Jackson rounded off a dramatic day by claiming a second career BTCC victory, as the leading protagonists kicked off behind in the final encounter in Norfolk.

The Ford man made one of the moves of the season on the opening lap as he held on around the outside, before eventually tucking in ahead of Adam Morgan in the Carlube TripleR Racing with Mac Tools Mercedes.

Morgan kept Jackson honest throughout while also holding the chasing pack at bay, but it wasn’t enough to prevent the latter from taking another impressive and hard-earned win.

Turkington concluded his sensational weekend by claiming an unexpected podium, as Butcher’s Ford Focus crashed into Ingram’s Toyota Corolla at the final corner.

The Speedworks Motorsport-run car of Ingram had been reeling in Butcher’s #6 machine in the latter stages and he eventually made his move at Coram on the last lap. The initial contact happened through the right-hander, but as Butcher’s Focus skated across the grass he then returned to the track before slamming into Ingram’s car at Murrays.

Turkington scampered past and was followed home by fellow title contender Sutton in the Laser Tools Racing Infiniti Q50, whilst Butcher crawled home in fifth.

Halfords Yuasa Racing’s Cammish claimed sixth, but he was one of many drivers to get stuck behind pole-sitter Chris Smiley in the Excelr8 Motorsport Hyundai. The Northern Irishman defended extremely heavily from the likes of Sutton and Turkington, but it was Cammish who would eventually end Smiley’s effort as he tapped the rear of the Hyundai i30N.

Rounds 22, 23 and 24 of the Kwik Fit British Touring Car Championship at Snetterton saw Turkington return to the top of the Drivers’ standings, whilst his Team BMW outfit holds sway in both the Manufacturers’ and Teams’ tables.

Sutton is nine points adrift in the overall order, whilst Honda star Cammish is a further 16 in arrears. Ingram and Butcher remain in contention, but the duo will be ruing their clash at the final corner of the final race.

Michael Crees leads the Jack Sears Trophy, whilst Turkington also returned to the head of Goodyear Wingfoot Award thanks to his pole position on Saturday.

Colin Turkington said: “Race one was a great start to my day – it’s always nice to get pole and convert it into a win. The first lap was a bit tricky and as the leader, you’re the one doing all the experimenting, but I knew that if I could keep Tom [Ingram] and Jake [Hill] behind me for the first laps that I would have a good chance of converting the race.

“I got a good start again in race two and survived the first lap when the pressure was on, but it was really the scrap behind me that allowed me to break free. I saw that Tom was having an almighty race trying to keep the others behind, so I just tried to keep my focus and keep chalking down the laps – there’s nothing that beats that feeling of winning!

“Finishing third in race three was big surprise for me, but when it’s going your way, it’s going your way and this was a perfect weekend. I tried to be patient, make the right moves and stay out of trouble. I had excellent pace with the weight and I knew I had to fight for every point and every position before we go to Brands Hatch. The BMW has been ballistic at Snetterton, so absolute credit to Team BMW for that. I leave very happy tonight.”

Ash Sutton said: “A couple of times in race one, I was trying to egg [Rory] Butcher on. Every time I got close to him, he just defended which made my life hard as I had Dan [Cammish] behind me. In the middle part of that race, I just sat there letting him go after Tom [Ingram] – ultimately we weren’t going to get past that thing in a straight line. It was a tough race, but I was pleased to get back on the podium.

“I got hit left, right and centre in race three – I felt like I gave every car the room it needed but [Chris] Smiley just thought different. It was a kick in the teeth for Colin [Turkington] to jump us. I feel like today, we’ve been pushed around a little bit and we’ve not had the pace in the car, but we’ve come away with a shout and that’s the key thing going into Brands.

Dan Cammish said: “What can I say we’ve been average throughout, we lacked something all weekend. From race one we’ve been chasing a lack of speed. We’ve looked good for pace this year but today we’ve just lacked something and I don’t know what that is. Usually when I go home if I’ve made errors then I’m feeling pretty down, but I don’t know what more I could have done all weekend.

“I could have done with a few more points out of today but what we’ve got to do is come back fighting at Brands and have a good end to this championship. I’m happy to be where I am. We’ve had a sensible year, there’s been opportunities missed but there’s also been some good days. It would have been nice to get a bit more out of this weekend, but all we can do now is regroup and see if we can come out with something a little bit quicker at Brands.”

Tom Ingram said: “The plan was always to jump Jake [Hill] off the line in race one, and that worked out perfectly – but keeping him behind me was no mean feat. He got a little bit of a run into Wilson and a bit of an overlap, but it’s greasy on the inside and he locked up and couldn’t get it stopped, which resulted in a bit of contact. Jake and I have raced against each other for over ten years now, and there are no hard feelings.

“Race two was a tough one – it was hard work keeping those guys behind. The safety car intervention at least allowed my heart rate to drop momentarily and I was pleased to come out relatively unscathed, and really happy with another second place and more good points – I lost some ground to Colin, but gained ground on all the other guys. I felt like I really earned my Ginsters pasty for that one!”

Rory Butcher said: “I really hate being involved in incidents. It just doesn’t sit well with me. I love to race hard, I love door-to-door racing but when you end up going across the grass and hitting one of your competitors, it’s a horrible feeling. Tom should have come out of that corner and taken that podium, it’s a shame.

“Overall we’ve been strong, I don’t think we’ve made the most of what we had in front of us; we should have had two podiums at least I think. But there’s lots of positives that we’ve got to take from that. The fact that we were so pacy and potentially could have fought for pole. And now we’re going to a track that we’re strong at and have done a lot of testing at, so that’s something to look forward to.”

Ollie Jackson said: “The first win was really emotional, but this one just feels brilliant. I used to win races back in Caterhams obviously, but I think once you get back into the feeling of winning races again, it’s definitely something and it gave me the confidence to push forward today. It’s fantastic after a pretty unlucky first race – I wasn’t expecting to have such a great end to the day.

“I got a good start and then managed to get the tyres switched on right away. I was just focussing on the track, getting the lines right and placing my car. Adam [Morgan] definitely had the pace on me towards the end. His car was probably set up to work in the second half of the race and mine was for the first half. gave me a good old push for the last few laps, but thankfully I just held on.”