By George Wilson10th May 2021Uncategorised 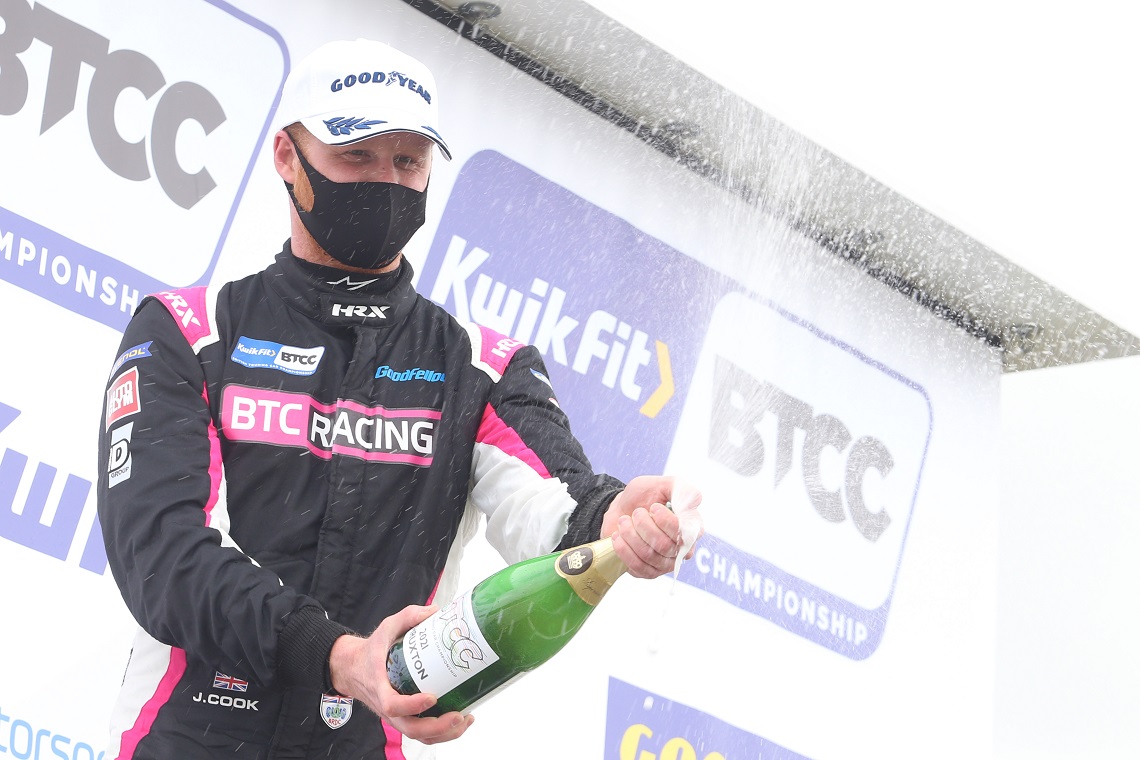 The BTCC Media Team from MPA Creative kicked of the new season in style last weekend, bringing fans and stakeholder all the action via television, radio, print, online and social...

Reigning champion Ash Sutton won the final contest in his Laser Tools Racing Infiniti Q50, but it was MB Motorsport accelerated by Blue Square’s Jake Hill who left the high-speed Hampshire venue with the early championship lead after the Kent driver scored an impressive podium hat-trick.

Cook had to work hard for the win in the curtain-raiser as he slipped past pole-sitter Sutton and Team BMW’s Colin Turkington after last season’s top-two drivers clashed on the opening lap of the new season.

Racing got off to an enthralling start – as you’d expect in the BTCC – and Cook initially seemed to lose out as his Honda Civic Type R bogged down from second on the grid.  Sutton held the lead down into the Complex for the first time, with Turkington and Cook’s #66 machine running side-by-side immediately behind.

As Sutton braked into the right-hander he was clipped by Turkington’s BMW 330i M Sport, and the reigning champion’s Infiniti was tipped into a spin.

Cook made the most of an opportune moment as he slipped into the lead, with the rear-wheel drive BMWs seemingly struggling for early grip. Turkington had by now dropped to fourth – behind Cook, Tom Ingram’s Ginsters EXCELR8 with TradePriceCars.com Hyundai and Hill – whilst Tom Oliphant’s BMW was spinning to the rear of the field.

The opening lap drama was far from over, however, with the most dramatic moment still to come as Ollie Jackson’s MB Motorsport accelerated by Blue Square Ford Focus wriggled through one of the quickest parts of the circuit.

Three-time champion Gordon Shedden was unable to avoid the rear of Jackson’s Ford and the Halfords Racing with Cataclean car was subsequently speared across the track and into the unfortunate Hyundai i30N of Chris Smiley.  Heavy impact with the barrier followed for Shedden and the safety car was immediately deployed.

Cook kept his powder dry following the restart, as did Ingram, whilst Hill’s #24 Ford Focus completed the podium despite coming under race-long pressure from Turkington.

Bath-born Cook eventually took a more straightforward victory in the second contest, but not before a couple of significant incidents punctuated proceedings.  The Ford Focus of Andy Neate (Racing with Wera & Photon Group) made contact with Glynn Geddie’s Cupra Leon (Team HARD. with Autobrite Direct), whilst Jade Edwards’ Honda (PHSC with BTC Racing) was also collected as the cars ran through turn one for the first time.

All three cars made heavy contact with the barrier, as the Team HARD-run machine of Geddie barrel-rolled to an eventual standstill. The drivers involved were thankfully unharmed in the accident, but the race was immediately halted by a red flag.

The restart got underway in a similar fashion when the Toyota Gazoo Racing UK car of Rory Butcher slammed into a tyre-stack after a high-speed run through Noble, as the Scotsman battled with Hill and Ingram.

The second race of the season gradually settled, but not before pole-sitter Cook had slid through the Complex into Ingram’s Hyundai i30N, although both cars were able to continue relatively unscathed.

Cook held P1 from start-to-finish and was joined by the perfect rear-gunner in the shape of BTC Racing team-mate Dan Cammish, who ensured that Hill had to settle for third – albeit securing a second impressive podium of the day for the Ford Focus man.

Sutton then splashed to a first victory of the season as the weather fell his way during a frenetic wet-dry-wet bout at the UK’s fastest circuit.

The Laser Tools Racing star was in fighting form throughout the day following two recovery drives and had already scythed his way to the front early in the reversed-grid encounter, as the vast majority of the field chose to run on Goodyear wet tyres.

Hill, Team BMW’s Oliphant and Smiley proved to be exceptions to the rule in terms of tyre choice, and when conditions improved after just a handful of laps it looked as if the trio had played a masterstroke.

The Ford Focus of Hill was particularly quick at mid-distance as he carved his way back through the order and eventually passed Sutton’s Infiniti Q50 for the lead on lap ten.

Incredibly, no sooner had Hill hit the front than the rain began to fall again on the high-speed Hampshire circuit, giving Sutton the opportunity to come back for the victory in the latter stages.

Hill was now hanging on to second with both Jason Plato (Adrian Flux with Power Maxed Racing) and Gordon Shedden (Halfords Racing with Cataclean) closing in on the final lap.

The trio went three-wide as the chequered flag fell and it was Plato who had snatched second from Hill by just 0.070s, with Shedden only 0.166s further in arrears.

It was yet another valiant effort by Hill and he was duly rewarded with the championship lead following his podium treble during this exciting season-opening weekend at the 2.36-mile circuit.

Cook’s double success leaves him one point off the summit of the standings, whilst Plato’s trio of top six finishes was good enough to see the series returnee hold third in the order.

Josh Cook (BTC Racing) said: “I’m really, really chuffed for the whole of BTC Racing; we’ve had a tough winter, but a good start to the year. We’ve just got to keep the ball rolling – we need to be fighting at the front at the end of the season so we’ve got to get our heads down!   “It definitely helped having my team-mate with me in race two. I’ve got to say, huge thanks to Dan [Cammish] – I’m sure he could have made my life a lot more difficult. Another one-two for BTC Racing and our second win of the day – we’ve got off to a dream start. Huge credit to the team – this is just brilliant.”

Ash Sutton (Laser Tools Racing) said: “I think Jake [Hill] and I experienced exactly the same thrill in race three. Like ‘ah no we’ve lost the race’ and then it comes back to you! I think we needed that after today, we deserved some solid results, and to end it on one is perfect.  “I’ve been really happy with the car’s balance, wet or dry, to be honest. But after not such a perfect day, to be only ten points behind in the championship is all that matters.”

Jake Hill (MB Motorsport accelerated by Blue Square) said: “It’s a huge result for me, MB Motorsport and Motorbase. It’s fantastic for all of us! For our first time as Manufacturers to come away with a podium at Thruxton – which has finally been good to me – I’m over the moon.  “As it rained at the end of race three, those last few laps fighting with Ash [Sutton] and then Jason [Plato] got me on the line, it was such hard work to keep it on the road. I was the first person on slicks by a long way in the end and I’m proud of myself and proud of the team, we’ve just done a fantastic job and I can’t believe I’m standings leader!”