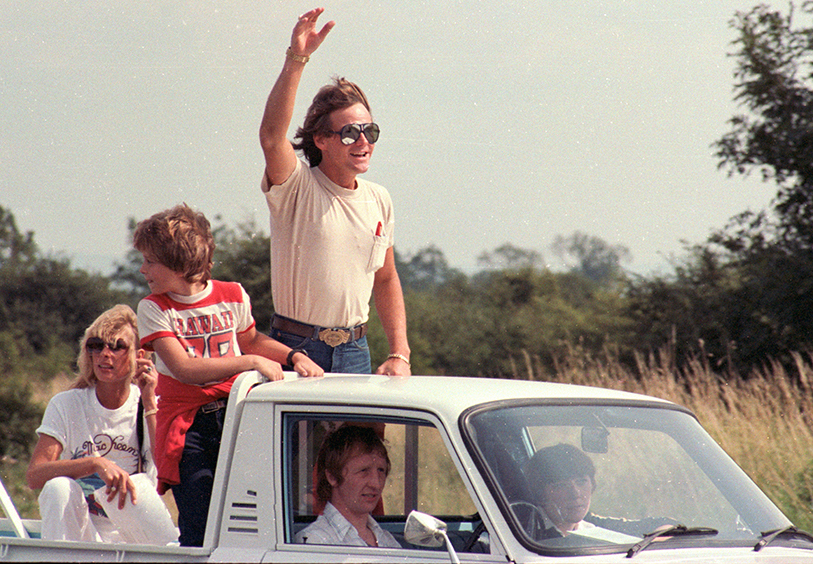 As the country finds itself swept up in wartime nostalgia, Croft Circuit will join in the commemorations next weekend (26/27 September) when it re-instates its popular Battle of Britain Race Meeting more than three decades on from its last edition.

Having originally been staged at the North Yorkshire venue when it opened its doors as Croft Autodrome back in 1964, the Darlington and District Motor Club-organised event was unique in its appeal as it showcased both car and bike racing.

The annual ‘RAF Day’ was held in deference to Croft’s aerodrome roots and its role as the most northerly Bomber Base in the UK during the Second World War, under the command of the Royal Canadian Air Force. Notably, a number of DDMC members had actively served in the conflict.

A traditional August Bank Holiday highlight, the Battle of Britain Race Meeting regularly drew crowds of up to 30,000 who were wowed by a blend of two, three and four-wheeled on-track thrills and captivating aerial displays from the spectacular Red Arrows and a thunderous Lancaster Bomber.

What’s more, the Battle of Britain Race Meeting became so well-established on the annual motor sport calendar that by the 1970s it was attracting sponsorship from global oil giant Texaco and drivers of the calibre of legendary world champions James Hunt and Barry Sheene and multiple grand prix-winner Patrick Tambay to perform demonstration runs and present trophies.

When circuit racing was halted at Croft in 1981, the Battle of Britain Race Meeting was lost – but 34 years on and in honour of the 75th anniversary of one of the most pivotal moments of the Second World War, the mixed-discipline event has been resurrected by the DDMC in conjunction with the North East Motorcycle Racing Club.

Since re-opening in 1995, Croft has gone from strength-to-strength, and the re-introduction of one of the most illustrious dates on its schedule maintains that burgeoning momentum.

“It’s fantastic to have the Battle of Britain Race Meeting back here at Croft,” enthused circuit manager Mike Cantelo. “For a long time, this was one of the most prestigious motor sport events to be hosted anywhere in the country, and to be reviving it in such a significant year is fitting indeed.

“Both the DDMC and NEMCRC have worked tirelessly to put everything together, and it is entirely appropriate that we have a tremendous variety of bikes, cars and sidecars on the bill. A superb weekend of racing and family-friendly entertainment is guaranteed!”

The packed programme will include solo motorcycles, the final round of the British F2 Sidecar Championship, the Northern Saloon & Sports Car Championship, the Porsche Club Great Britain Championship and the MG Cockshoot Cup. A coveted Battle of Britain Trophy will be awarded to the overall winner, with special accolades for other placings of merit.

Tickets are available at just £10 in advance for either Saturday or Sunday, or £13 on the gate. Accompanied children aged 15 and under will be admitted to the circuit free of charge. For further information or to find out more about any of Croft’s race meetings or driving experiences, see http://www.croftcircuit.co.uk/ or call 01325 721815.