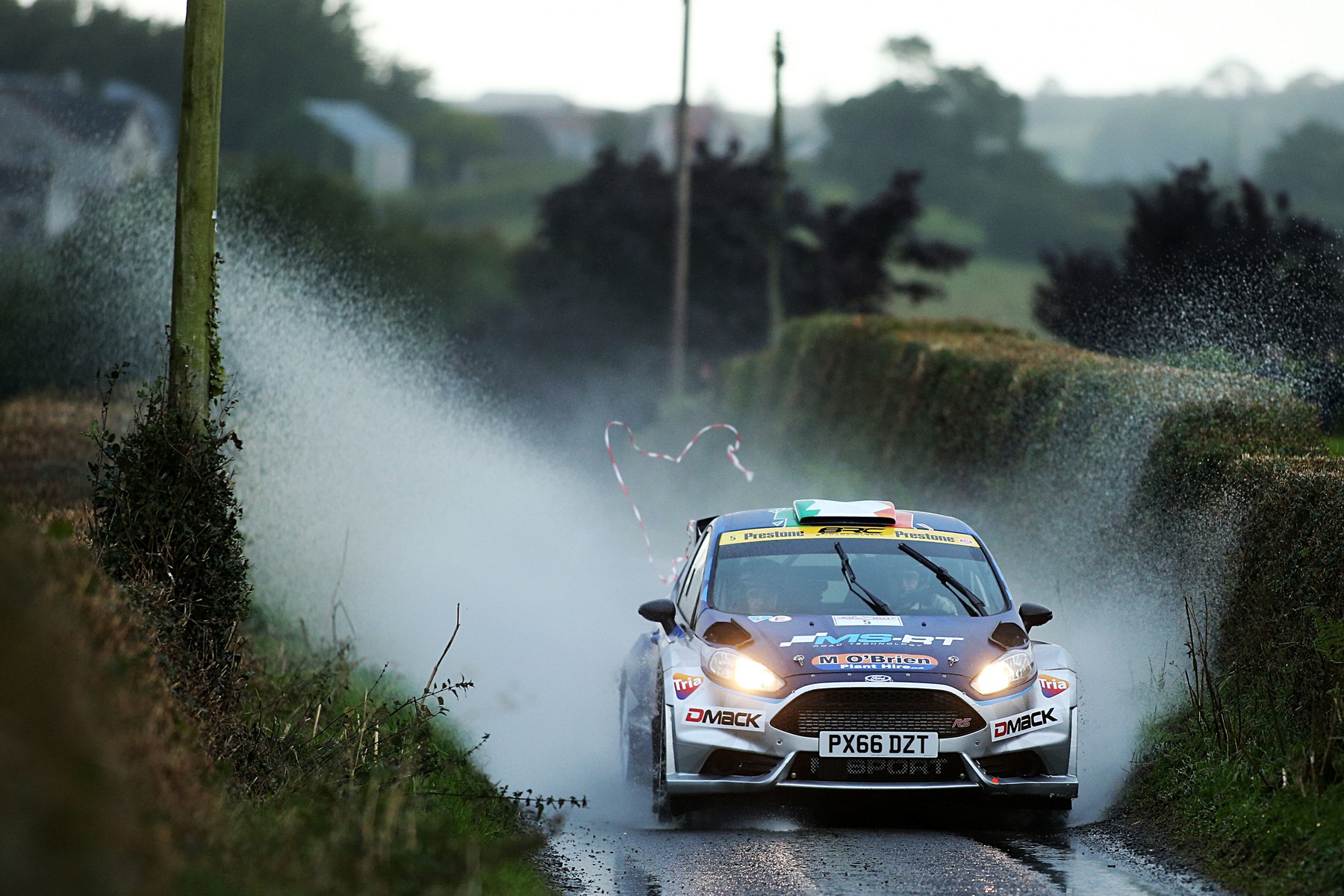 Three-time BRC champion Keith Cronin and co-driver Mikie Galvin claimed victory on round six of the Prestone MSA British Rally Championship – the John Mulholland Ulster Rally (18/19 August). The Irish pairing took their second win of the season in their M-Sport–prepared Ford Fiesta R5 to set-up an exciting title fight ahead of the season curtain call on the Isle of Man.

Finishing second on the Ulster Rally was Swedish sensation Fredrik Ahlin and his Norwegian co-driver Torstein Eriksen in their Skoda Fabia R5. The result was their best finish on a Tarmac event as they maintain their championship lead ahead of the end of season crescendo with Cronin and Galvin. Rounding out the BRC podium was local crew Marty McCormack and navigator David Moynihan (Fabia R5) who clinched their third rostrum of the season.

The legendary Ulster Rally was to provide two days of enthralling action around Derry/Londonderry. Crews were waved off into the event by the mayor of the city, Maolíosa McHugh under the shadow of the Guildhall. Over 130 miles of slippery, bumpy and narrow Tarmac lanes faced the British Rally Championship crews – providing a heart-pumping spectacle as the championship fight took another step forward to its end of season showdown.

Torrential rain showers added an exciting extra ingredient into the opening days proceedings before wet, but drying stages played host to the second and final day of action.

Sailing across the rain-soaked stages were Keith Cronin and Mikie Galvin in their DMACK-supported Ford Fiesta R5. Cronin and Galvin are the regaining Irish Tarmac Champions and used all of their knowledge to set the fastest stage time on the opening test, before breaking away from the pack on the subsequent stages. Despite a puncture scare early on Saturday morning, the M-Sport crew never looked back and held the top spot throughout the 14 times stages to take their second BRC win – backing up their dominant Ypres victory in June.

Keeping them honest across the two-day event was the Welsh crew of Osian Pryce and Dale Funrniss. The Ford Fiesta R5 partnership held onto Cronin’s coattails and at the overnight halt had brought the gap-down to a mere 1.1 seconds going into the second day. Unfortunately for Osian and Dale, history repeated itself and the fuel-pump on the Fiesta packed-up once again – replicating the retirement from the Nicky Grist Stages – round five of the BRC.

Fredrik Ahlin and Torstein Eriksen had enjoyed a ding-dong battle with Pryce all event long and once the Welshman dropped from the leaderboard, Fredrik was the only man left to challenge an on form Cronin. Setting top three stage times all weekend, Ahlin had declared himself an all round driver after a strong display on the Irish Tarmac. Second place in Ulster puts the championship power in his hands and is ready to fight Cronin on the Isle of Man for the title.

Jonny Greer has had a disappointing season by his high standards and elected to not score BRC points on the Ulster Rally. The Northern Irishman went in search of an outright podium and a win in the Irish Tarmac Championship. Deciding to use unhomologated tyres to allow him to fight for Irish supremacy, this made him ineligible for BRC championship points.

With Greer not scoring, up stepped Marty McCormack and navigator David Moynihan. The Irish crew rolled their Kumho-shod Skoda in dramatic style in Ypres and hired a Fiesta R5 to keep their championship aspirations alive. Back in the Fabia and McCormack was back to his brilliant best, threading the Czech machine through the narrow lanes to land his third podium of the season and putting himself in contention for a top three in the championship standings.

Irishman Desi Henry made a welcome return to the series after electing to miss the Nicky Grist Stages as he too rolled his Fabia R5 in Ypres. Along with Liam Moyinhan the pair threw everything at the rally to try and return to the rostrum but this time they had to settle for a respectable fourth in their Michelin-shod Skoda.

Alex Laffey was eager to bounce back after a retirement on the Nicky Grist Stages. Bounce back he did, as he and co-driver Patrick Walsh survived the two-day encounter to bring home their Pirelli-supported Fiesta R5 into fifth place and in the process has helped M-Sport close the gap to rivals CA1 Sport in the teams’ standings.

Matt Edwards and Darren Garrod were due to make it five tyre manufacturers in the top six but the Hankook Ford Fiesta R5 driver had to retire on the second day due to a broken throttle cable which had caused havoc all weekend – denying the Welsh pair their third podium on the bounce.

William Creighton and co-driver Liam Regan claimed their second win in the Prestone Motorsport News Junior BRC after two days of gruelling action on the Irish asphalt roads. The Peugeot 208 R2 crew last won on the gravel, on the Pirelli International Rally back in April and were determined to win their home event and strengthen their position at the top of the championship standings. A blistering run made Creighton untouchable as the Michelin-star notched up his fifth podium from six events.

The Northern Irish crew enjoyed a battle royal with fellow championship leader Callum Devine and Keith Moriarty on the opening day but Devine’s charge was halted on Stage 10 when the alternator cried enough – sending the Opel ADAM R2 driver into an early retirement and denying the fans of titanic tussle in the junior formula.

Norwegian star Oscar Solberg declared at the start of the event that he was going to take it easy and build his experience of Irish Tarmac. The Pirelli-backed driver ignored his own advice and pushed like Oscar only knows how. Right from the start, the Scandinavian gave it his all – bouncing the Ford Fiesta R2T between the grass banks and hedges. Solberg’s team, MH Motorsport certainly had its work cut out as they rebuilt the Fiesta throughout the event. With the car looking like a patch-work quilt at the end of the 130-mile marathon –Solberg and co-driver Patrick Barth finished second, claiming their first podium since their victory on round one – the Border Counties Rally.

Also in the fight for the rostrum positions were local stars Marty Gallagher with Dean O’Sullivan sat alongside. The 208 R2 crew were having their best showing in the BRC to date but a seized gearbox on the second stage of the final day put paid to their event and championship assault.

Englishman Josh Cornwell breezed to his fifth win in the Cadet Cup to claim the inaugural championship in his Ford Fiesta R2. After a third place on the Nicky Grist Stages, Cornwell had to travel to Northern Ireland to finally secure and seal the title. With Tom Woodburn expertly guiding, the Dorking-based driver set some rapid times – quick enough to put him in the mix with the more powerful and younger cars in the Junior BRC category and in front of five-time BRC champion Jimmy McRae on the overall classification.

The only other driver who could mathematically challenge Cornwell was MH Motorsport teammate Alex Waterman and his co-driver Harry Thomas in a similar Ford Fiesta R2. The pair did all they could, but they couldn’t stop the Cornwell freight train this time around and despite only being in their first full season of rallying, the pair can hold their heads high – showing some impressive pace in the BRC.

Rounding out the top three in the Cadet Cup was the team from Harper Adams University led by James McDiarmid and Max Haines-Messenger. The Ford Fiesta National crew suffered driveshaft woes on the opening day before a more consistent run on the second allowed them to pull clear of fourth placed crew Nabila Tejpar and Richard Bliss (Ford Fiesta R2).

In the National Rally Cup, John Morrison and Peter Carstairs were the sole runners in the class on the Ulster Rally. The Scottish crew had to bring the Mitsubishi Evo 9 to the finish to put the title out of reach from Donnie Macdonald who was absent from the Derry/Londonderry event. Flinging the big Japanese machine around the lanes, the new NRC champions stepped out of the car at the finish, pleased with their weekends work.

David White and son Matthew were in a similar position, as they too had to finish to wrap-up the BRC4 title. The father and son duo love the Tarmac events and were keen to tick off the iconic Ulster Rally from their rallying bucket list. The Barnsley-based team started to hear noises from the gearbox on Saturday afternoon and lost the intercom with three stages to go. Keeping cool heads the White’s came home in the top 10 in the BRC section – scoring their first outright championship points and the all important BRC4 title.

“It started out with a big fight early on and there was nothing between us after the first day. Tyre choice was a complete lottery and we capitalised on a good decision on the second day to bridge a gap. Unfortunately we then got a puncture so we had to build a lead all over again! We have the best chance other than Fredrik [Ahlin] to win the title and he is the clear leader but rallying is rallying. We had a bit of bad luck at the start of the year, maybe we will have some luck at the end to give us a chance to fight for the title.”

“This event was a real, real tough one. Hats off the Keith [Cronin] his pace on the wet Tarmac was unbelievable. We couldn’t match it but we have got a lot closer to the front running pace this year compared to last year so we are always learning. We are going to need to drive hard on the Isle of Man and it will be really fun to drive in a fight for the title. It’s going to be interesting, let the quickest man win.”

“We started off a bit slow, we found the conditions very tricky and we had a puncture early on as well. Gradually we built the pace and we wanted to get a good finish here so I am delighted to get third. I find I always take a bit of time to get onto the pace but I am really happy with the performance in the rebuilt car and to be back on the podium is very gratifying.”