CURTAIN COMES DOWN ON ANOTHER RECORD-BREAKING SILVERSTONE CLASSIC 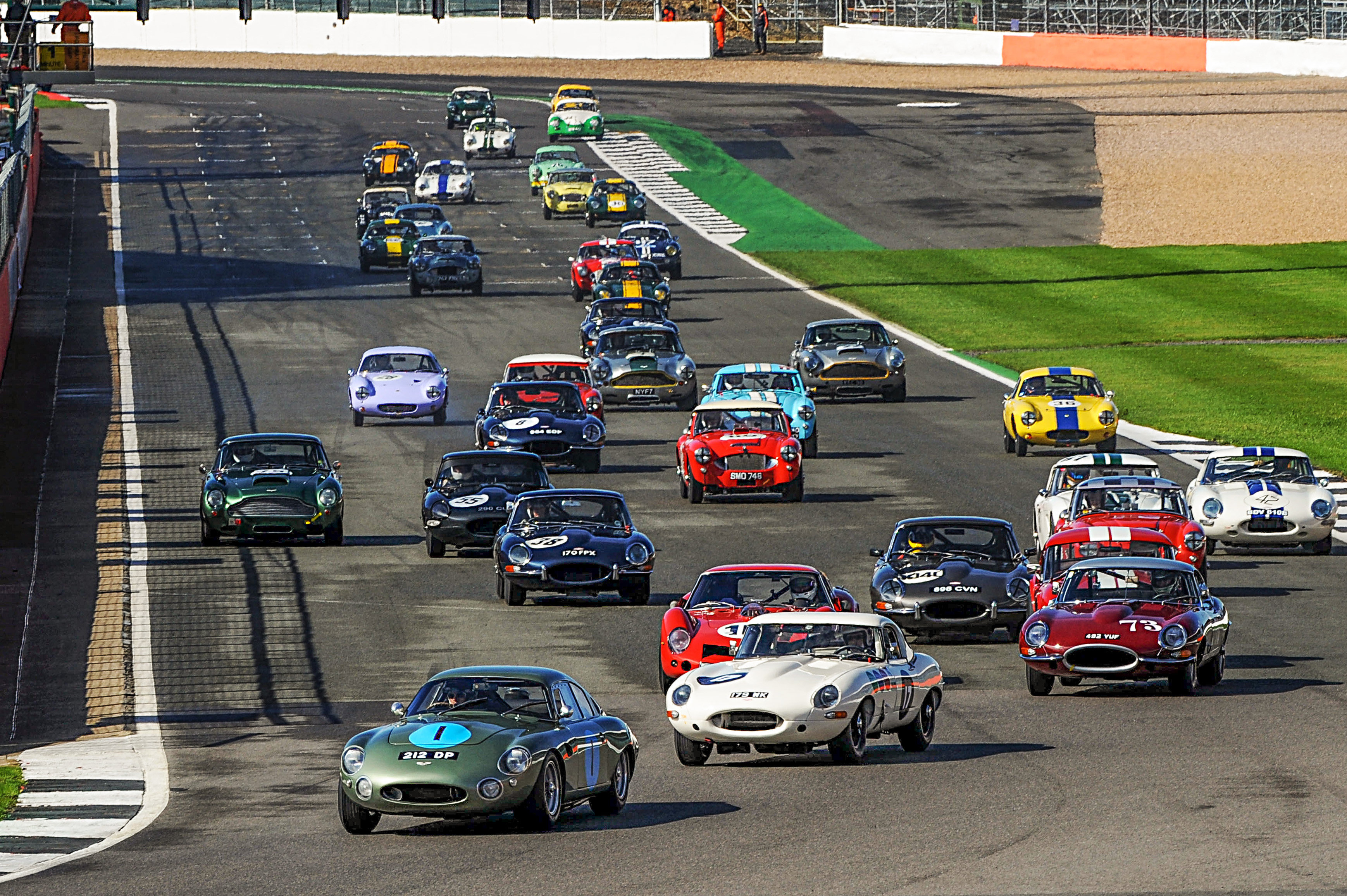 The 2017 Silverstone Classic drew to a close today (30 July), with another record-breaking day that included ten crowd-pleasing races, eye-catching anniversary parades and high-speed demos that sent more than 100,000 spectators home with wide smiles on their faces.

In excess of 1,000 entries spanned some eight decades of glorious motor sport history over the course of the weekend, from evocative Pre War Sports Cars all the way through to DFV-era Formula 1 machinery and tin-top icons from the much-loved Super Touring era.

Away from the circuit, a veritable treasure trove of classic cars saw no fewer than 10,000 packed into the infield, from fabulous Ferraris to awe-inspiring Aston Martins, legendary Lotuses and magnificent Maseratis – and everything else in-between. The dazzling display included another massive turnout from Porsche Club GB, Jaguar’s hugely-popular F-type drift experience and the Gaz 21 Club, all the way from Russia.

One car that travelled to Silverstone from even further afield was the striking, shark-nosed BMW 635 CSi, which made the trip from Australia to be piloted in both JET Super Touring Car Trophy races by its original driver, ‘Gentleman Jim’ Richards – one of which saw the New Zealander indulge in an entertaining wheel-to-wheel duel with fellow tin-top hero Steve Soper.

The JPS-liveried car was brought over by its owner Peter Sturgeon, who was rewarded for his outstanding endeavour with the Stuart Graham ‘Scarf and Goggles’ trophy. Introduced in 2015 to mark the festival’s 25th anniversary, the award is now presented annually to what is judged to be the most admired car competing at the Classic. Sturgeon received the accolade from Graham, one of the inspirations behind the original Classic event staged at Silverstone and a TT winner on both two wheels and four.

The efforts of the crowd-pleasing eBay RESTORATION LIVE team were similarly recompensed with the coveted Mervyn Garton ‘Scarf and Goggles’ Award for the best off-track visitor attraction that saw a 1984 Ford Capri successfully restored using only parts sourced from eBay. The finished model was shown off at one of Mike Brewer’s Car Clinics. The car will now be sold for Silverstone Classic’s charity partner Prostate Cancer UK on eBay.

The Street Car Shootout was another popular draw, while fans were additionally treated to the wonderful sight and sound of Nigel Mansell’s 1992 British Grand Prix-winning Williams FW14B in two commemorative high-speed demos. Another undisputed highlight was an eye-catching track parade of 115 McLaren road cars – an unprecedented figure that is hoped will be certified as a Guinness World Record. Fittingly, Bruce McLaren’s daughter Amanda was present in what would have been her father’s 80th birthday year.

Racing is what the event is most famous for, of course, and nobody earned spectators’ applause more than historic single-seater exponent Sam Wilson, whose three victories from four starts – and a runner-up finish – deservedly earned him the Motor Sport Magazine Driver of the Weekend Award.

True to form and building upon a phenomenal Friday and sensational Saturday, Sunday’s track action saw a trio of single-seater and sportscar races serve up some spectacular entertainment at the world’s biggest classic motor racing festival.

On the 50th anniversary of the world’s most famous junior single-seater series, the second Formula Ford 50 presented by Historic Motorsport International race of the weekend saw Michael O’Brien replicate his Saturday success, as he expertly navigated a track surface still damp from overnight rain.

Despite seeing his early lead erased by a safety car intervention, the Merlyn Mk20A driver maintained his composure and had enough pace to head off a challenge from reigning champion Callum Grant in the closing stages, with Benn Tilley getting the better of Ed Thurston in a last lap tussle over third.

The blue riband Royal Automobile Club Tourist Trophy for Historic Cars (Pre ’63 GT) was arguably the highlight of the morning – with a dramatic final twist in the tail for good measure. Lukas Halusa overhauled early leader James Cottingham behind the wheel of his unique Ferrari 250 GT SWB ‘Breadvan’, and went on to comfortably control proceedings up to the final few laps.

Despite losing a chunk of time a handful of laps from home, Halusa remained in charge and finished first-on-the-road – before being handed a retrospective 45-second penalty speeding in the pit-lane, relegating the scarlet Ferrari to fifth.

Halusa’s misfortune meant the duel for the runner-up spot between Simon Hadfield and Patrick Blakeney-Edwards was in actual fact the battle for victory. When Hadfield took over in the Aston Martin DP212 ‘project car’, the car was languishing down the order, and notwithstanding a brace of off-track excursions, a string of fastest laps saw him charge back through the field to pip the AC Cobra within sight of the chequered flag.

An interesting entry in the race was European Parliament Brexit Co-ordinator Guy Verhofstadt, who was spotted with both the UK’s Secretary of State for Brexit, David Davis, and Event Director, Nick Wigley, in the Silverstone Classic Heritage Paddock.

Making up for his disappointment in the previous race, Blakeney-Edwards produced a tremendous performance to triumph in the following Royal Automobile Club Woodcote Trophy for Pre ’56 Sports Cars, with the Cooper T38 he shared with Frederic Wakeman leapfrogged the Jaguar D-type of the Pearson brothers during the pit-stops to take the lead. John Pearson subsequently fell back into the clutches of the hard-charging Chris Ward, who stole second place in the closing stages in his Cooper Jaguar T33.

In the FIA Masters Historic Formula One race, Silverstone instructor Michael Lyons led home Nick Padmore and Jonathan Kennard. In Williams’ 40th anniversary year, it was somewhat fitting that both races should be won by the team’s FW07 – the car that delivered the squad its first grand prix victory here at Silverstone back in 1979.

The Silverstone Classic Celebrity Challenge Trophy Owner Race witnessed a terrific three-way slipstreaming scrap for the top spot between Mike Jordan, Jonathan Lewis and Ben Colburn, with the advantage switching on practically every lap. The ex-BTCC race-winner ultimately drew upon all of his racing experience to prevail, with the pursuing Colburn and Lewis separated by a scant two thousandths-of-a-second at the flag.

Both HRDC races helped the event to raise a very significant amount of money for the Classic’s official charity partner Prostate Cancer UK, and once the results were combined, it was the Bike Legends team that came out on top.

The new-to-the-bill Jaguar Classic Challenge was an instant crowd-pleaser, with hordes of eye-catching E-types producing a spectacular showpiece as they were pushed right to their limits and occasionally beyond. The low-drag example of Julian Thomas grabbed the early lead but its glory was short-lived – a technical issue leading to its retirement. Victory finally went to Gary Pearson from the fast-finishing James Dodd.

The FIA Masters Historic Sports Cars contest was even more dramatic and ended behind a safety car after several damaged cars were abandoned around the circuit. Martin O’Connell’s fast-starting Chevron B19 burst past the front row sitters to lead the pack. Behind him, a fierce battle for second developed between Dan Gibson (Lola T70 Mk3b) and Nick Padmore’s Chevron B19. Just as Padmore appeared to have taken the place, the cars touched with the Chevron spearing into the barriers.

Gibson’s luck ran out later in the race. Dicing with O’Connell for the lead, the Lola suffered a rear puncture when forced off the circuit, paving the way for the former British F3 National Class Champion to sprint clear to victory.

The Maserati Trophy for HGPCA Pre ’66 Grand Prix Cars delivered a superb scrap between Jon Fairley in his 1964 Brabham BT11/19 and Sam Wilson’s older Lotus 18 372 – resolved in favour of the former – with an equally good battle for earlier front-engined car honours pitting Julian Bronson’s brutal Scarab Offenhauser against the unique Maserati TecMec piloted by Tony Wood, whose challenge was scuppered by a ten-second false start penalty.

The second Group C contest of the weekend was again affected by rain, with the field starting on slick tyres but obliged to pit for wet weather rubber as the precipitation intensified. When the race was rejoined, the ex-Michael Schumacher ‘Silver Arrows’ Mercedes C11 held a commanding lead, with driver Kriton Lendoudis even able to afford a couple of off-track excursions on his way to victory. Following a pit-stop delay, yesterday’s winner Steve Tandy charged back through to snatch the runner-up spoils.

The JET Super Touring Car Trophy appropriately brought the curtain down on another super-successful Silverstone Classic, with Saturday star Jason Minshaw and James Dodd waging a titanic duel for glory on a drying track. Dodd’s Honda Accord ultimately got the better of the ex-Rickard Rydell Volvo S40, as former European Touring Car king Gianfranco Brancatelli winning the simultaneous Group A race in his flame-spitting, Spa 24 Hour-winning Ford Sierra RS500.

Highlights of this year’s event can be caught on ITV4 at 20:00 on Thursday, 10 August, presented by Tiff Needell.