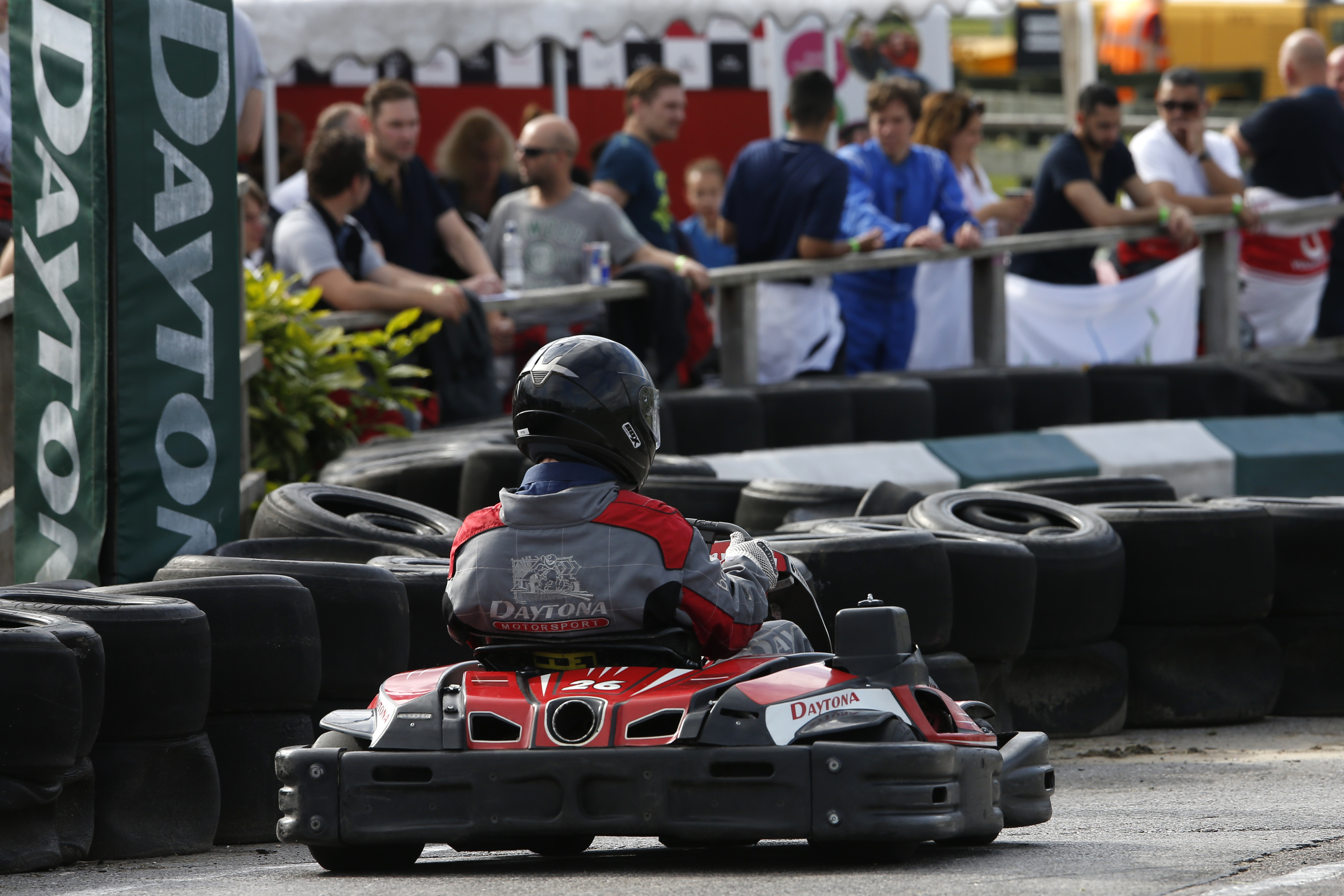 Stars from the world of motor sport have been revving up a storm at Daytona Sandown Park in Surrey to raise vital funds for local charity the halow project.

Spearheaded by 1996 Formula 1 World Champion Damon Hill OBE – co-founder and patron of the Guildford-based charity, which is dedicated to supporting and creating opportunities for young people aged between 16-35 with learning disabilities – the fifth edition of the annual Damon Hill Karting Challenge attracted 27 teams made up of local businesses, halow supporters and karting enthusiasts and each counting up to five drivers.

In a flat-out and tactical adrenaline-fuelled thriller, participants duelled it out around Esher’s impressive 900m outdoor GP Circuit behind the wheel of Daytona Motorsport’s super-fast Sodi RT8 pro-karts, with Allianz-formed team Amos One and local business Pilgrims Group winding up second and third to complete the podium positions.

Le Mans-style driver changes added to the spectacle, with racing ‘joker’ cards injecting an extra element of unpredictability and spice by allowing teams to buy an extra lap or ‘black flag’ a dominant rival in order to gain an advantage – all contributing to the fundraising total.

At the end of the event, a charity auction saw some fabulous prizes go under the hammer – from a signed Damon Hill Williams F1 shirt to a BRDC package for the forthcoming British Grand Prix at Silverstone, an autographed Daniel Ricciardo Red Bull Racing vest, a limited-edition Damon Hill print and an exclusive Daytona event for up to ten adults.

“This was the fifth time Daytona Sandown Park has hosted the Damon Hill Karting Challenge, and by common consensus, it was the best yet,” enthused Daytona Motorsport Director, Jim Graham. “The halow project is an extremely deserving charity, and to raise so much money for such a good cause was fantastic – everybody who took part is a superstar in our eyes.”

“I was delighted to welcome so many people to Daytona Sandown Park for a fast-paced, adrenaline-fuelled evening of racing to raise vital funds for a cause so close to my heart,” echoed Sky Sports F1 pundit Hill. “The halow project supports young people with a learning disability, and I am thrilled with the amount raised on the evening and so grateful to all the karters for their support. I look forward to seeing you all again next year!”

Indeed, the date for the 2017 Damon Hill Karting Challenge at Daytona Sandown Park has already been confirmed as Wednesday, 21 June. Bookings can be made by contacting Diane Savage at diane.s@halowproject.org.uk or on 01483 447960.

Daytona Sandown Park is the perfect venue to host an event of this magnitude. Easily able to accommodate three to 300 participants in variety of racing formats, this facility is the perfect choice for corporate, leisure or high level professional kart racing. Nestled within Sandown Park’s famous horse racing track in Esher, Daytona Sandown Park is widely hailed as one of the best kart venues in the South East and the only one of its kind within the M25. This amazing facility has been offering outdoor professional karting for 5-year-olds and upwards for over two decades and is still growing in popularity. (www.daytona.co.uk)