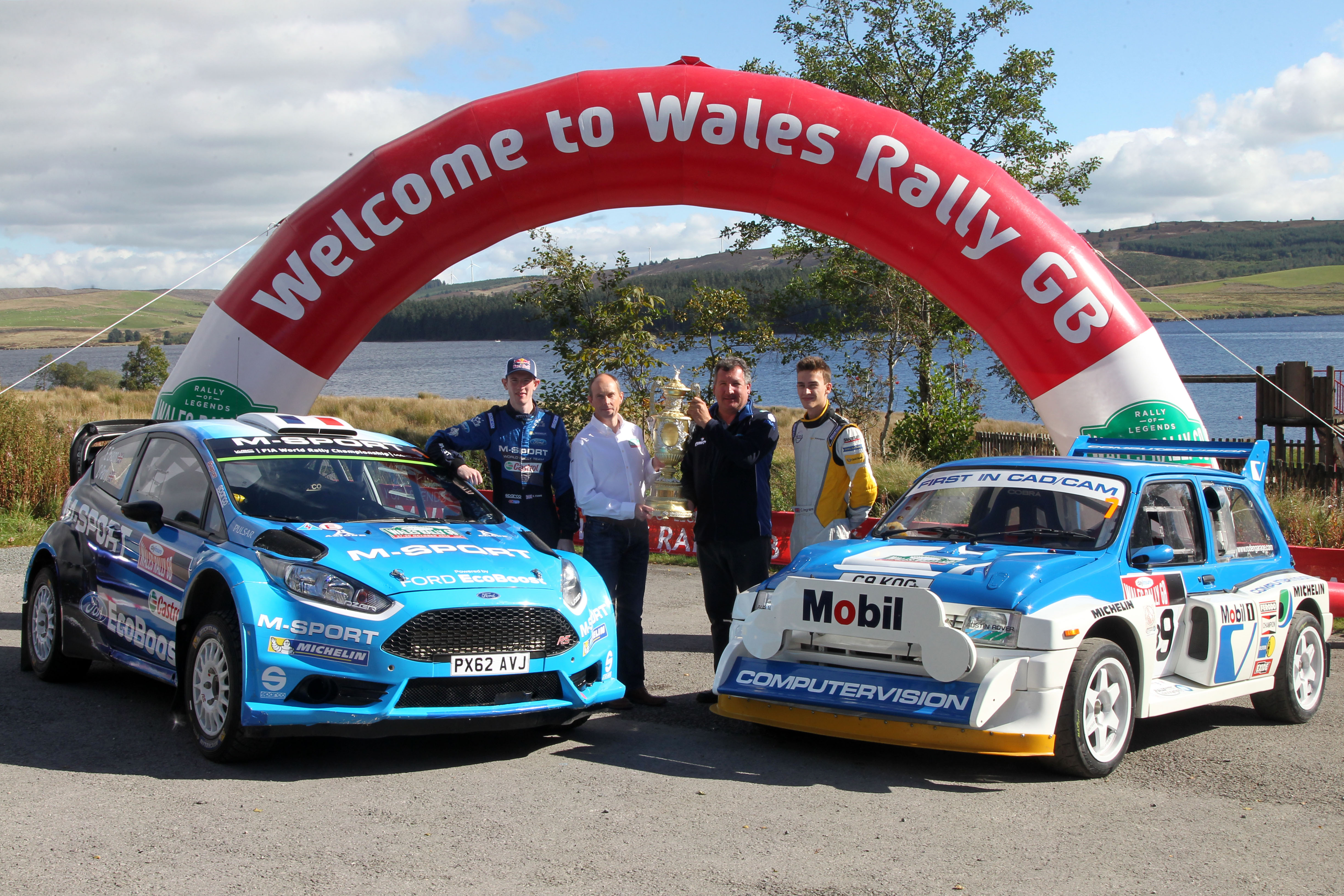 It’s official: the 2016 edition of Dayinsure Wales Rally GB is now firmly within view, with a busy media preview at the picturesque Brenig Reservoir today (22 September) revving attendees into a frenzy as one of the world’s most spectacular sports returns to the famous Welsh forests.

In what is Wales’ official Year of Adventure, it is fitting that FIA World Rally Championship (WRC) crews will be faced with the longest and toughest competitive route since the event moved to north Wales three years ago when they take to the challenging stages on 27-30 October.

Many of today’s guests at Brenig Reservoir on Denbigh Moor were afforded a tantalising taste of the flat-out action ahead with a blast along the roads playing shotgun to some of British rallying’s leading lights, including recently-crowned MSA British Rally Champion Elfyn Evans and fellow Fiesta R5 driver and BRC2 Champion Matt Edwards.

They were joined by FIA European Junior Rally Championship runner-up Chris Ingram, highlighting the breadth of young homegrown rallying talent and proving that the sport’s future in this country is in extremely safe hands.

“For me, having an event that comes right by the front door is obviously very, very special. There’s no mix of conditions and atmosphere anywhere in the world that can match what GB has to offer. The fans come out in their thousands and the atmosphere is unique.”

“With the right car we could go well here. We were strong last year and think we could well challenge right at the sharp end.”

Joining Evans and co. on stage inside the Llyn Brenig Visitor Centre – overlooking the venue that will host Dayinsure Wales Rally GB’s event-concluding Power Stage next month – was Dennis Ryan, Founder and Chairman of new title partner Dayinsure, one of the UK’s premier short-term car insurance firms. He was quick to explain why the Tarporley-based company and Britain’s round of the all-action WRC are such a natural fit.

“It’s a great privilege to meet everyone involved with the event,” said Ryan. “From a business point of view we’re extremely excited about what this partnership will do for us. The company is based in Cheshire and the demographic is such a great fit for what we do. The motor manufacturers, the retail customers and the audience could not be a better match for us.”

“It’s an honour to partner with an international event of such calibre. Our concept follows exactly what the company name would suggest and we’re sure our title sponsorship of Wales Rally GB will encourage even more people to ‘Dayinsure It’.

“I’m a fan, I’ve been in the forests as a kid and I’m thrilled to be going back there this year with all of our involvement.”

Just days after Natural Resources Wales (NRW) reached a new access agreement with the Motor Sports Association (MSA) to allow Dayinsure Wales Rally GB to use NRW-managed land for the next three years, Conwy County Borough Council Leader Dilwyn Roberts spoke up to reaffirm the prestige of the event and its importance to the local economy, with Conwy now entering its fourth year as its official host county.

“I am very proud of the strong relationship we have forged with Dayinsure Wales Rally GB,” said Roberts. “The prestigious FIA World Rally Championship has helped showcase across the world what our county has to offer.

“Beyond the obvious, events provide strength for Conwy’s economic driver – our tourism industry, providing much needed income to our local businesses, of which we are seeing more of thanks to infrastructure demands.

“The media coverage the event brings means Conwy truly is on the map and we’re excited to host the Dayinsure Wales Rally GB once again for 2016.”

Welsh Government Cabinet Secretary for the Economy and Infrastructure, Ken Skates, not in attendance on the day, echoed the thoughts of Conwy County Borough Council.

“This year’s Wales Rally GB promises to be another spectacular event and as our Year of Adventure 2016 comes to an end it shows the range of adventures which can be had here in Wales,” Skates said. “We have some of the finest rally stages anywhere in the world and the event is a showcase for the spectacular scenery and landscapes in Wales.

“The Welsh government’s support for the rally also shows our continued commitment to the event, which has significant links with the automotive sector in Wales. The country is home to around 150 component and systems manufacturing companies and has 18,500 people employed in automotive manufacturing with an annual turnover of over three billion pounds. We look forward to the adventure next month.”

The 2016 edition of Dayinsure Wales Rally GB will take place two weeks earlier than usual, with its half-term date making it an ideal family activity. There’s plenty to appeal to all ages at the Rally Village in Deeside and the ever-popular Cholmondeley Castle RallyFest in association with GreenThumb. Fans will be able to savour the mesmeric sight and sound of some classic, flame-spitting Group B cars tearing around the castle grounds.

Dayinsure Wales Rally GB is not only a treat for all the senses, but arguably the best value for money of any World Championship-level event in the whole of the UK, with discounted advance tickets still available and accompanied children aged 15 and under admitted free of charge. Event Managing Director Ben Taylor forecasts a thrilling feast of high-octane action for dyed-in-the-wool rally fans and curious newcomers alike.

“It’s a fantastic event with so much history and pedigree as the international rally of Great Britain since 2003,” said Taylor. “The move to north Wales has been completely reinvigorating. The way the region and its people has embraced what we have to offer here has been fantastic. They’re welcoming, they’ve done a fantastic job year on year and they’re the people to thank for the success of this event.

“It’s not just the spectators. It’s the competitors, the teams, the communities and the media that have recognised there’s something big going on here again and they’re a huge, important part of it.

“This year, I’m delighted to welcome Dayinsure as title sponsors. Involvement with an event on their patch offers them a great opportunity to help their business grow. They’re an exciting company and we’re thrilled that they’re on board with us.

“We’re also delighted with the backing of Welsh government and NRW. The move to Cholmondley Castle and into England for our family-friendly RallyFest – it signals Wales’ intent that the country is open for business and going over the border, to the benefit of the event and Wales itself, illustrates just that.”

Tickets on sale
Tickets for October’s event are on sale and selling fast, with significant discounts for those buying in advance. Adult ticket prices start at just £20 for the family-friendly RallyFest at Cholmondeley Castle, £25 for a day ticket or £99 for the full four-day event pass. All tickets include free parking and an event programme priced at £9. The latest event and ticket information can be found on the official www.walesrallygb.com website. For further updates, follow Wales Rally GB on Twitter @walesrallygb or join the conversations on Facebook atwww.facebook.com/walesrallygb.

Combine the thrill of spectating with the indulgence of fantastic hospitality at the
Dayinsure Wales Rally GB between 28th and 30th October. World-class rally action always delivers an amazing spectacle, but nothing compares to enjoying the day from the comfort of our fabulous hospitality facilities at Sweet Lamb, Cholmondeley Castle and Llyn Brenig.